Say hello to HERE WeGo – that’s the new name for the HERE Maps app. The navigation app  famous for its offline functionality not only has a new name but also some interesting additions to make navigation easier especially in cities. 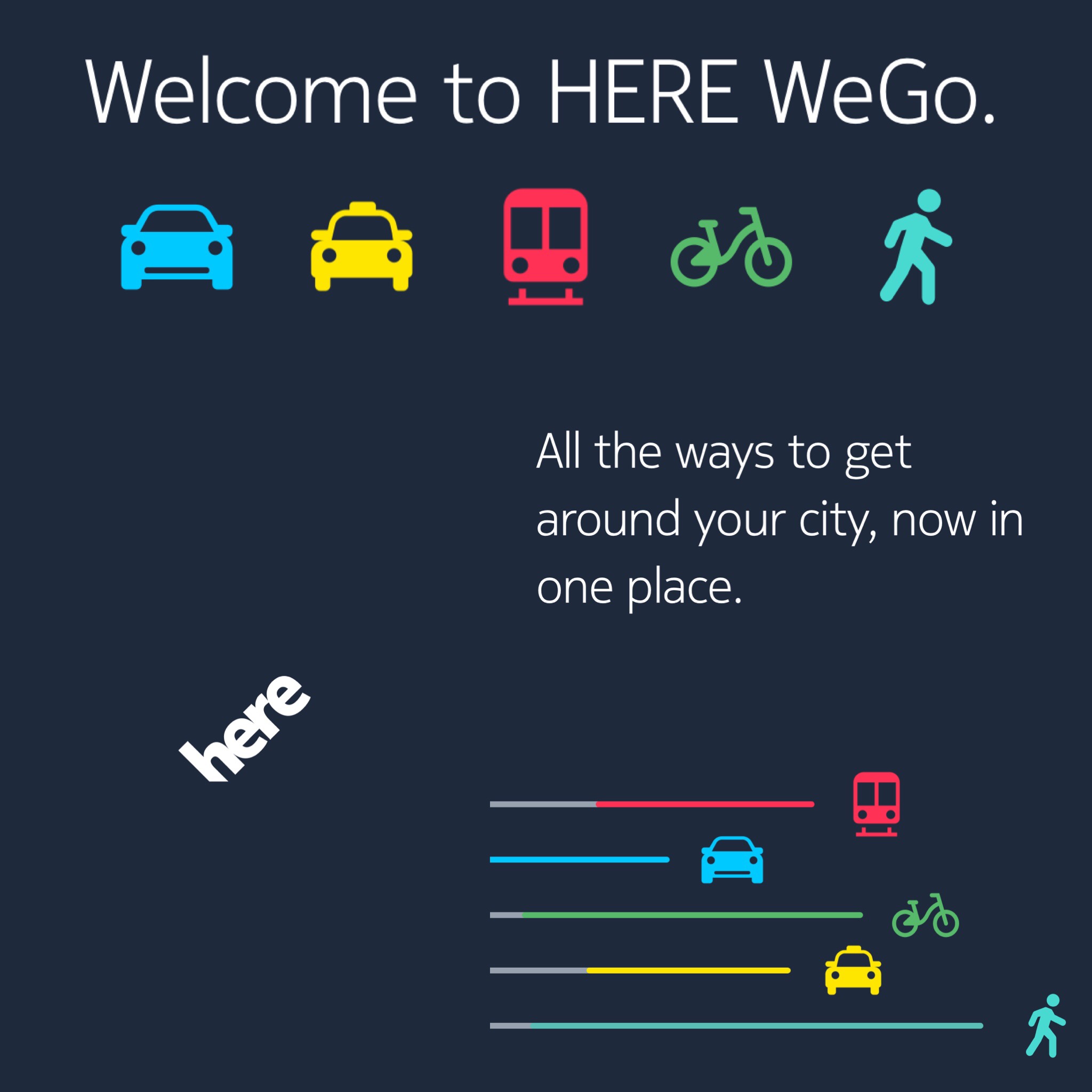 In addition to the regular transportation options (transit, bicycle, pedestrian, driving) – HERE WeGo also provides you information about car-sharing options from Car2Go. (Is this the beginning of a new trend? To name app with Go in the end? Car2Go, Pokemon Go, HERE WeGO,..hmm). If you love cycling, then you’ll be happy to hear that there are improvements to the bicycle routing as well.

“Effortless City Navigation” seems to be at the heart of the new HERE app, right from the getting rid of the “Find the route” button that used to be visible at the bottom of the app. Its a minor tweak but definitely a welcome one!

Its interesting that HERE WeGo has integrated Car2Go but not (yet?) the car-sharing service from BMW – DriveNow. There are several minor tweaks to the UI including the more darker colours at startup that give the app a refreshed look. Check it out and let us know what you think about it. #HEREWeGo 🙂 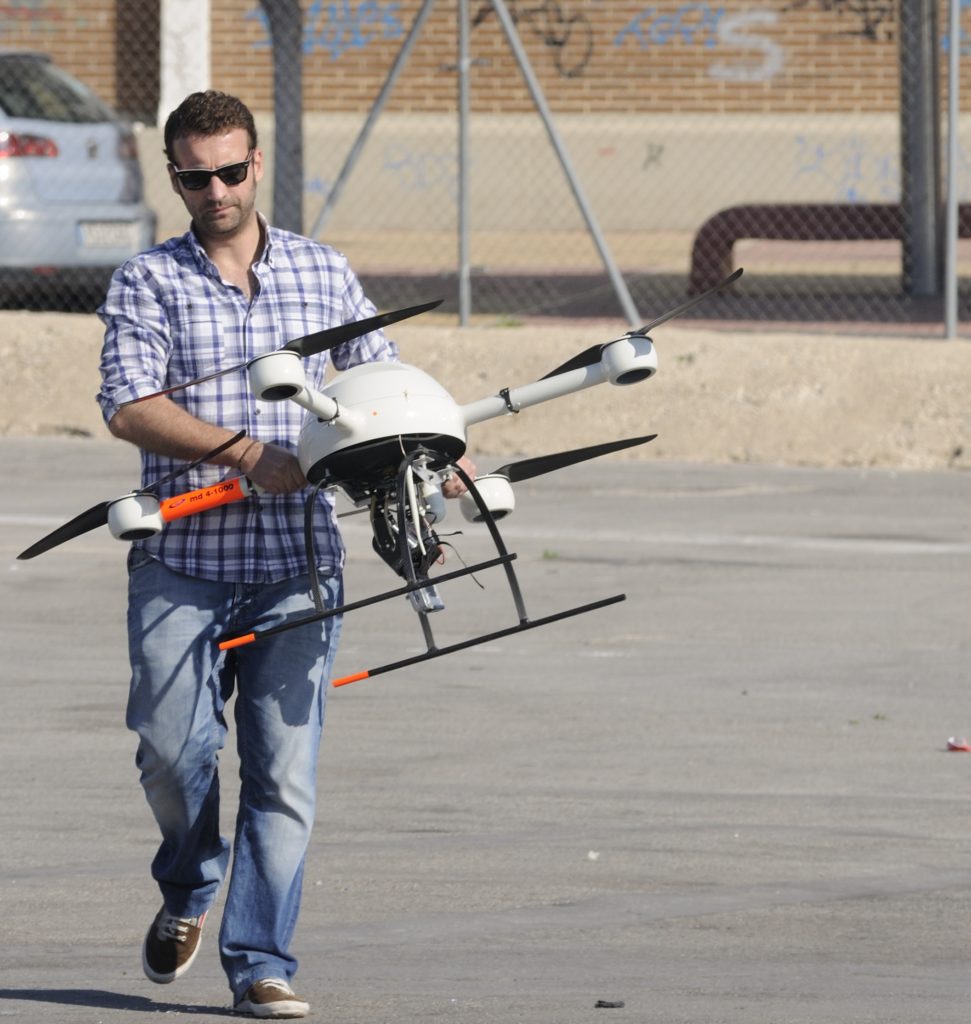 Drone mapping is a buzz word of 2016. Companies like PrecisionHawk or SenseFly offer end-to-end UAV mapping solutions where you don’t need any extensive drone experience or GIS knowledge. Their tools and solutions are simple, straightforward and they work out of the box. But 5 years ago it wasn’t that easy…

Carlos Agustín Pineda Martínez our guest editor from Spain told us the story about how he started his one-man drone business back in 2011 when you most likely haven’t even heard about drone-based remote sensing.

When did you first figured out that you can make a business on drone mapping?

To be honest I needed a change, a 180 degrees turn in the things I was making. I had been running my one-man GIS consultancy company for a few years, but the financial crisis arrived to Spain and my key customer from Public Sector simply stopped paying… I knew that I needed a change and I must diversify my business offer, look for something that could attract other sectors, and I thought that drones could be this ideal tool. Be one of the first drone mapping companies in Spain could be a good restart.

What was your first mapping project? And the most challenging one?
The truth is that my first project was not a mapping project. I was hired to make a series of aerial photography to document a solar panels in the University of Murcia.
One the other hand in the most challenging project we had to map dozens of locations in Spain of endemic vegetal species. We had to map and move our equipment through very diverse places, from dunes to mountains. Crazy adventure! At that time, the equipment was really bulky and heavy. It barely fitted in my trunk, not to mention carrying it around to wild and unapproachable areas. 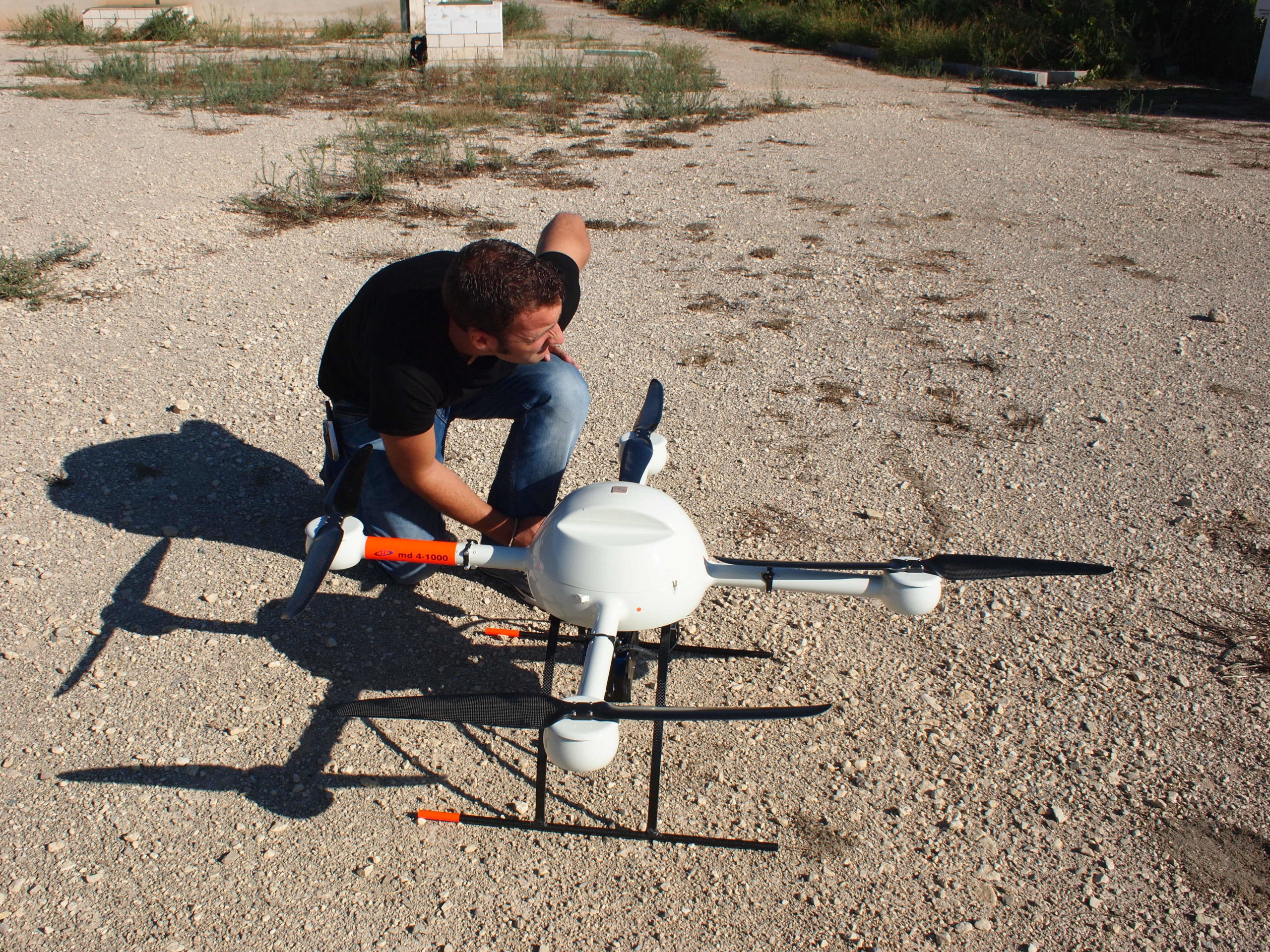 How did you select your first drone? What equipment do you use today? Do you need any special sensors?

When I started there were no drones, only a few model to choose from. They were also very expensive and required a big infrastructure to operate. My first drone was Microdrone MD4-1000 it very heavy and very bulky but it could fly 45 min of a single charge which is a great result even according to current standards. Today we are working with two DJI drones, Phantom I and Phantom III Advanced. We are also investigating the possibility to use new sensors different from traditional optic ones with the intention to work in other areas like precision agriculture.

Ok. So you’ve captured some aerial images in the field and what’s next? Do you need any software process and georeference it?

Many people think that you capture the images and then… magic happens!!! Unfortunately, a few years ago it was not that easy. For example, if you wanted to make an ‘orto’ with drones, you had to follow a certain process. The first step is the flight plan, calculating hight and the overlap between photos. In addition, it is necessary to take a series of control points on the ground. You can do it with a GPS device but you need a centimeter-level accuracy. Today many drones have their RTK version which makes it possible to skip that step. Once your imagery is taken, you need a software to work with it. My choice was Pix4D which was one of the first companies on the market and offers easy to use but full of feature remote sensing software. With that sort of tools you just need to enter all your data and it easily generates ortos and other products like DEM. At the beginning it’s not that easy and you may need a couple of courses or training sessions. 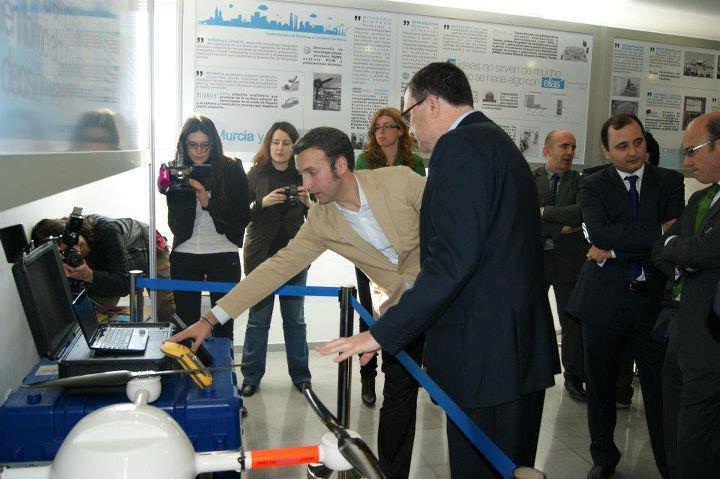 What value does the drone-based remote sensing brought to your customers? How did they use the images?

The first, immediate effect was a significant cost reduction if you compare it with traditional photogrammetry. The second and, in many cases, the most important one, was the possibility to have a high spatial and temporal resolution of the data. In the project I was talking about earlier, I had to capture the areal images during the flowering period which can last just a few days every year. Additionally in order to capture all the details, we had to fly really low which would be impossible with any other technology.

Thus, I think that the spatial and temporal resolution is the most important value added brought by drone mapping technologies.

How has the industry changed since you first started? 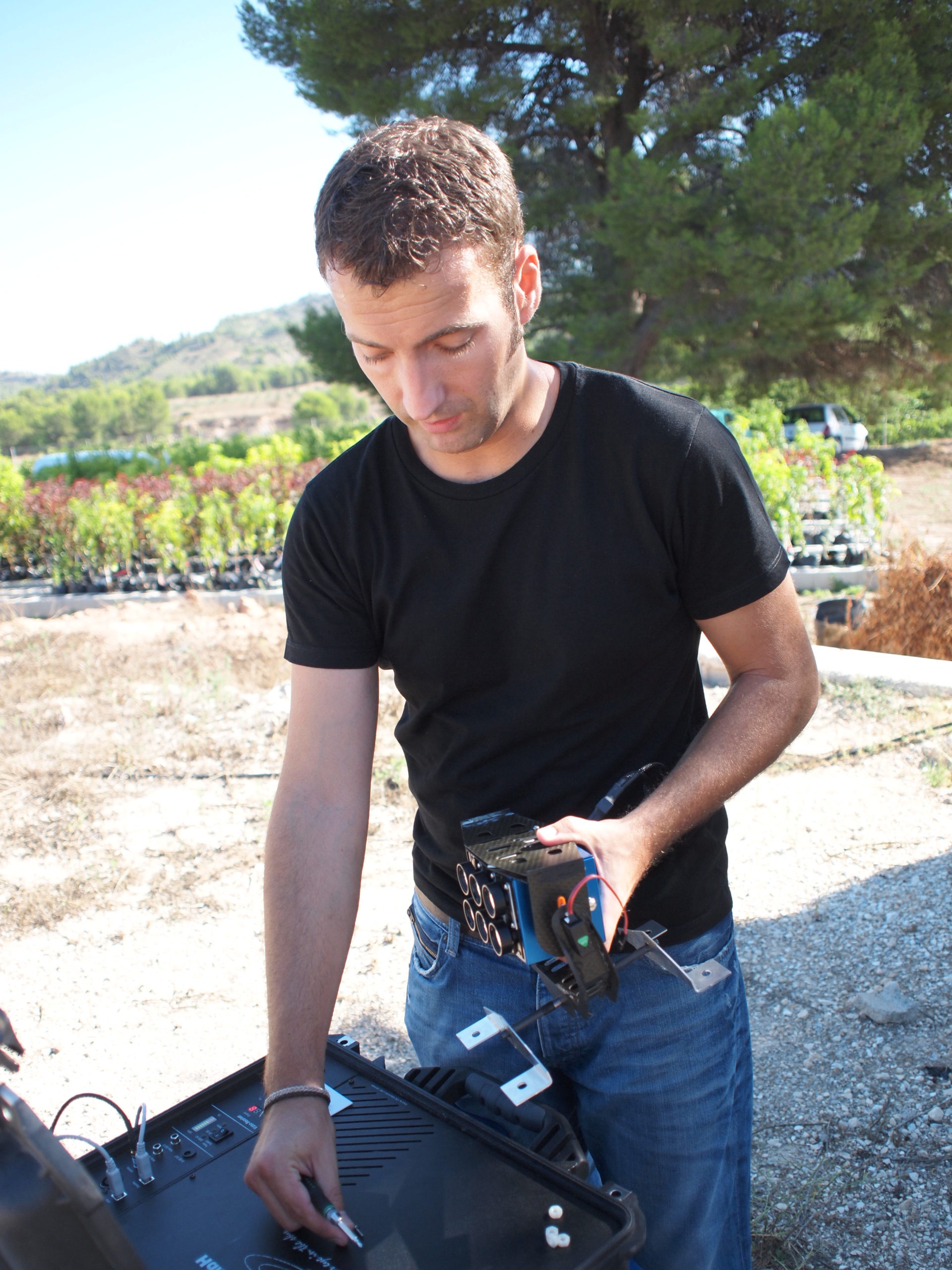 In two fundamental things: cost and size. Like many other areas related to technology, the prices of drones dropped significantly over the past few years.
Also the size of the hardware decreased. At the same time flying and operating it got much easier and the software improvements made it much more user-friendly.

Another important thing, is that today it is a regulated activity. It is very important for the future of the drone mapping in Spain and around the world. Future professional pilots must have the corresponding permissions and certificates to make a living out of it. It will improve the safety associated with that sort of work.

What are you plans for the future?

Continue hard-working. Continue innovating, playing, dreaming. Continue telling stories with maps. At the beginning no one knew what drone is. Today, everybody knows. I continue working in GIS, maps, drones… All geo-technologies, this is my goal. I want to use drones, but like a tool, not like a purpose. I have new projects in mind, but always near the geo technologies. If you want to interview me next year I could tell you a few of them;).