Last Wednesday, on Valentine’s Day, a teenager opened fire in a Florida high school, killing 17. Now, the United States is no stranger to mass shootings. Last week’s incident was this year’s 18th. What was different though was how the country, and the world, experienced that horrific event. 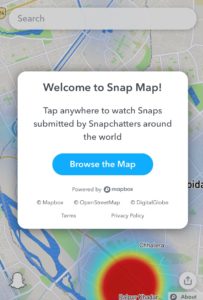 The students who survived the shooting took to Snapchat to give a first-hand account of what was happening inside the Marjory Stoneman Douglas High School. They documented the chaos by posting videos and stories of people running from the gunman, the police response, fellow students hiding during the lockdown, et al. They also used the platform to let friends and family know they are safe.

But the gruesome account of their vulnerability wouldn’t remain confined to the users of the popular social media platform. Anybody who visited map.snapchat.com at the time could see the report of active shooting featured on Snapchat’s location-sharing tool Snap Map.

That’s because only a few days ago, Snapchat had released a web browser version of Snap Map. And when the shooting began, Snapchat employees curated the stories coming to its platform to give a ‘breaking news’ report of the tragedy.

The Snapchat team followed all the best practices you would expect an established news source to follow while reporting the sensitive topic. They sifted through the stream of posts to see which content would add value to the users and should be broadcasted to the web. They labeled disturbing visuals as ‘graphic content’. They verified the reports coming in. And, of course, they made the story available to the whole world irrespective of whether they have a Snapchat account or not – via Snap Map’s web version.

But watching a heartbreaking tragedy shine light on the efficacy of Snap Map’s web debut was almost watching history repeat itself. When Snap Map debuted in June 2017, it was met with much skepticism. Its Actionmoji caricatures were freaking people out and privacy advocates were hailing the feature as a stalker’s paradise. It wasn’t until Hurricane Harvey flooded Texas in late August that Snap Map finally got its moment in the sun (no pun intended).

In the 86 hours that Harvey unleashed its full fury on Texas, Snap Map’s Our Story stream received between 250,000 to 300,000 submissions. It played an instrumental role in giving people a first-hand account of what was happening in Houston. It helped victims find out where the nearest shelter was, or where volunteers were distributing food and supplies.

Today, Snap Map has over 100 million monthly active users, which is no mean feat for a geospatial application launched less than a year ago. Naturally, Snapchat has big plans for Snap Map.

In an earnings call, Evan Spiegel, CEO and Co-Founder of Snap, has explained, “We’ll be working on improving the frequency with which people use that product, mostly by trying to provide more value around using the maps experience. Today, it’s hard to know where to go, it’s hard to navigate interesting things that are happening. And so as we improve the product, we will make it easier for you to find the most interesting things that happened on your map.”

For now, if you swipe around Snap Map on your desktop or mobile browser, you will see public story bubbles at hotspots around your city. Zoom in and tap on a bubble to see what strangers in that area have been capturing on their phones. You can even share Map Stories you’re viewing by clicking on the button on the top right corner of the map.

It will be interesting to see how marketers leverage this feature, because that will give Snap an opportunity to finally monetize the Maps product too. In the meantime, let’s count on Snap Map to be our window into the world in the most unique and personal manner.

#Business
How the EU Space Programme is contributing to the EU Green Deal.
Vanessa Alexakis 07.19.2022
AWESOME 0
#Business
Celebrating the Top 100 Geospatial Companies of 2022
Muthukumar Kumar 08.1.2022
AWESOME 4
#Business
We have analyzed 568 geospatial startups around the world. Here are the conclusions about the market
Hassan Safieddine 05.21.2022
AWESOME 11

Lost a loved one to opioids? This map is for you

10 years ago, Jeremiah Lindemann, a solution engineer at Esri, lost his little brother to an opioid called OxyContin. For the first few years, he spoke very little of the topic, even with family and friends. Instead, he started volunteering at a rehab for opioid addicts. But he never felt like he was making any difference. So, he stopped.

Then, a couple of years ago, Jeremiah came across a study published by the Centers for Disease Control and Prevention. He discovered that more than 28,000 American citizens had died from overuse of prescription drugs in 2014 alone. He realized opioids was a much bigger crisis than he’d thought – one that needed to be talked about.

This time, he did what he does the best. He created an interactive memorial map to honor the victims of the opioid epidemic. The crowdsourcing platform would allow people to add an image of their late loved one and describe how they lost them to heroin and other prescription drugs.

Called Celebrating Lost Loved Ones, the map went online in 2016. Today, it hosts the memorials of more than 1,300 opioid victims across the United States. Entries have poured in from New York, Pennsylvania, Ohio, Massachusetts, Michigan, New Jersey, Wisconsin, Florida, California, Illinois, Indiana, Maryland, Minnesota, and Virginia. And given that one in every four people in the US has been directly affected by the opioid epidemic, the numbers are only increasing every day.

Which is why the National Safety Council (NSC) has now officially adopted the map as a part of its campaign to eliminate preventable opioid deaths. The NSC is positive that this map will help raise awareness of the broad impact of the opioid crisis through its human factor. According to NSC President and CEO Deborah A.P. Hersman, “The Celebrating Lost Loved Ones map can help reduce the stigma around opioid-related deaths by allowing us to get to know those in our community who were loved and are so deeply missed.”

Jeremiah echoed these feelings in a blog post he wrote while publishing the map in 2016. “This is happening to people everywhere — rich and poor, north and south, and within every demographic… If our country, our families, and our friends are to truly address this issue, we must understand what it is and where it’s happening. I’ve become much more vocal in sharing this painful story, and maps have been my voice to raise awareness about the problem.”