Google’s Activity Recognition API is awesome but where are the apps?

Activity Recognition is one of the most interesting aspects of machine learning and contextual awareness. This is what makes our smart-devices truly “smart” and aware. Back in 2013, Google launched the ActivityRecognitionAPI to developers (and yes, this article is a bit late to that party) and yes, iOS has also had this feature since 2013 –CMMotionActivity. 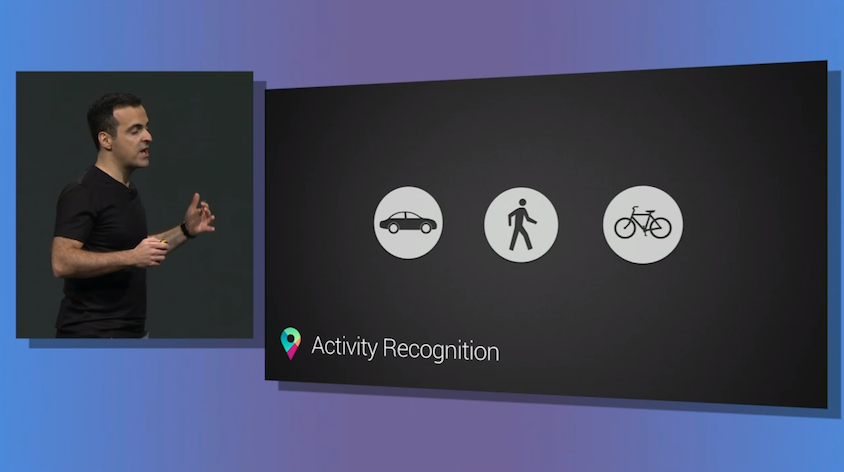 For those of us who don’t know about the API, the ActivityRecognitionAPI is basically an interface that allows android app developers to know what “activity” the user is currently engaged in without the hassle of getting raw data from individual sensors and then having to run a complex analysis to come to a conclusion. The API returns the detected activity together with the confidence of its results. 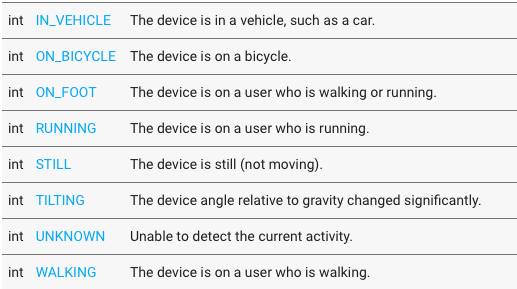 So the developers get to know whether someone is running, walking or cycling, so what?

The ActivityRecognitionAPI isn’t just an API that can be used for fitness tracking, although, it would be the most obvious use case. Here’s a simple use case, the majority of times, we use Google Maps/Here Maps/OSM, there is this little but inconvenient step of having to select a mode of transportation but if the ActivityRecognitionAPI running in the background knew with 100% confidence that I was walking, maybe the developers could then simply show walking directions instead.

Of course, with data like this, there are a lot more than one can do. OpenSignal.com had an interesting example:

For anyone operating a sensor network – like WeatherSignal or OpenSignal – then this is a huge windfall. We’ll be able to compare the performance of signal in vehicles, to when the phone is still (most likely at home/work), and we’ll be able to filter our weather readings more precisely. – OpenSignal.com

One of the biggest talking points for the Apple Watch was that it would remind you to get up and move around when you have been sitting for too long but your Android phone could have been doing the same thing for 2 years now. Granted, the Apple Watch (or any smartwatch) for that matter would do a better job at fitness tracking than your smartphone.

Are apps really making use of Activity Recognition?

Really, the possibilities are endless with such capabilities and of course, there would be privacy concerns as well. But rather the more intriguing question is “Are there many apps that make of use of the API” and if not, why aren’t they using the API!!

When smartphones became ubiquitous, there was an explosion in the number of location based applications. The way we navigate changed. Period. Granted, it did take a few years for the developers to take full advantage of the GPS in our smartphones and maybe the same development cycle also applies to Activity Recognition as well. Maybe there are already several apps that use Activity Recognition in subtle ways. If you know applications that already make of the API, do let us know 🙂

Here’s a wish: Google Maps has been getting a lot of useful updates lately and hopefully the ActivityRecognitionAPI eliminates the need for selecting the mode of transport as well.

When you search for a precise road network data for GIS analysis you would go to TomTom or HERE. But what happens when you need a global geographic data of a lower granularity, but proven quality and you don’t have millions to spend? The answer is simple, you go for ADC WorldMap.

The makers of ADC WorldMap, American Digital Cartography, Inc., have been a leader in providing digital map data for over 25 years and the latest version of ADC WorldMap, v7.2, was released today.

Joe Roehl, Vice President of ADCi states, “We are excited about the latest release ADC WorldMap – we have enhanced many features based on customer requests.” Roehl adds, “Version 7.2 adds a new World Nations Line layer and improves many features such as up to date Administrative boundaries over the entire world.”

ADC WorldMap is a geographic database featuring 43 detail rich layers and tables. The baseline for the whole dataset is the most current country and political boundaries for the entire world and second level administrative boundaries for 130 countries. Moreover, the product features:

ADC WorldMap is available in a variety of file formats including .shp, .gdb, .tab and Oracle 11g.

You might think that couple of companies offer more detailed datasets… Indeed, but ADC WorldMap is the only one that combines price and data consistency for an all-around premier value. Dataset of a comparable scope from TomTom or HERE would cost between 10-100 times more depending on your needs.

In theory one could argue that this data could be extracted to GIS format from the OpenStreetMap but there are couple of problems with that. First of all the quality and granularity of user generated OSM data are unknown and not guaranteed which might be important for your project. Secondly taking into account time and computing power requirements to extract, filter out and analyze continuity of layers needed, will cost you much more than licensing of the ADC WorldMap. I did such an exercise for a single European country couple of years ago and it took me two weeks… Doing it for the whole continent or world would take much longer than that.

So if you’re searching for a global or a continental dataset at this scale ADC WorldMap is the best choice.