Google unveils The Cartographer – its backpack for mapping indoors

We’ve all heard about Google Trekker – the backpack that creates Street View of locations which are not accessible by car. Today, Google unvealed a new mapping tools which is called the Cartographer. The Cartographer is also a backpack but this one aims to map indoor locations. The device uses Simultaneous Localization and Mapping (SLAM) technology to plot out the floor plan of a venue. As the backpacker walks through a building, the floor plan is automatically generated in real time. The wearer also uses a tablet to add points of interest while walking around the building. The technology is very similarly to the solution developed by the University California, Berkeley students, which were reporting some time ago.

There are already six indoor maps available on Google Maps today that were created with the help of Cartographer. These include the JW Marriott San Francisco, the San Jose Marriott, the Museum of Children’s Arts, the Deutsches Museum’s aviation section in Munch, the San Francisco Marriott Marquis and the Discovery Museum. Google claims that mapping the 39-story San Francisco Marriott Marquis hotel only took a few hours. So I’m wondering how much post-processing is there to perform after you capture the data… it’s hard to believe that it’s done 100% automatically.

Location-based apps by HERE (which is Nokia’s brand for mapping products) has been associated  with Windows Phone  for a very long time. HERE tried to experiment with iOS when Apple released its own, widely criticized maps. It ended up with withdrawing the app from the AppStore as it was simply terrible and no one really used it. I still keep it on my iPhone just to remember how not to make mapping apps.

But HERE decided not to give up. Last week they released their first beta version of HERE for Android. It will be exclusively available only for Samsung Galaxy smartphones. 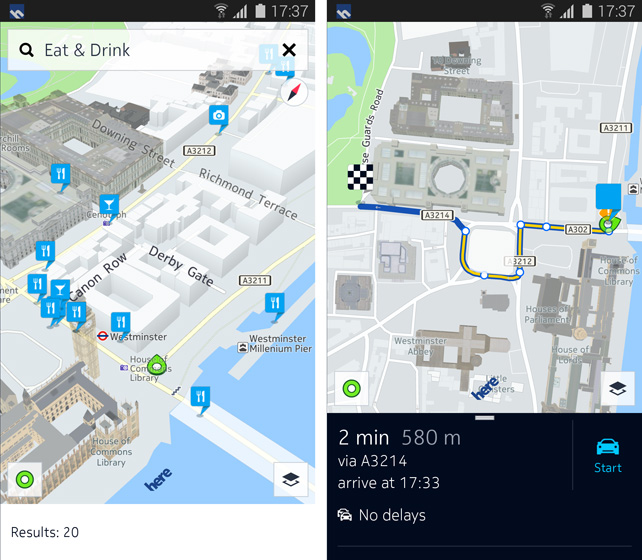 WHY WOULD YOU CHOOSE HERE OVER GOOGLE MAPS?

First of all, the design of the app is quite a thing. It makes a really impression (at least on pictures). But there is one thing… it looks exactly like Google Maps!!! Not in terms of colors, fonts and icons, which are magnificent but the functionality and menus looks too much alike Google. 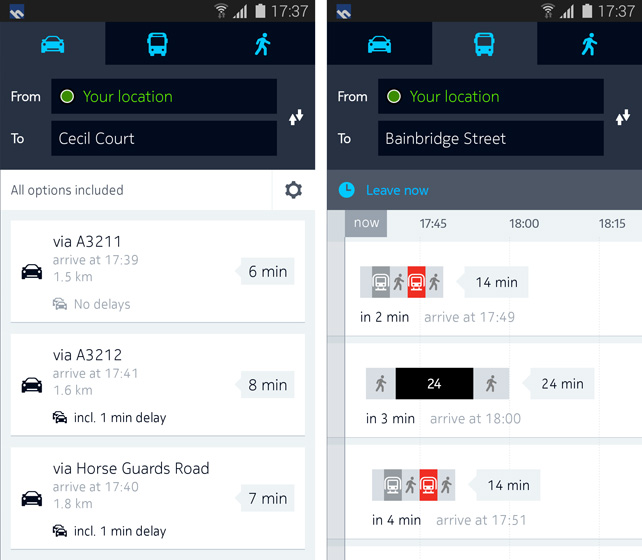 Ok. But this not the reason why Samsung users will actually use the app. HERE gives option for full offline mode with saving maps of whole countries. This is something that Google cannot compete with. Although Google Maps have the option to save maps from several years  it is rather dedicated for smaller areas like a neighborhood or possibly a city. 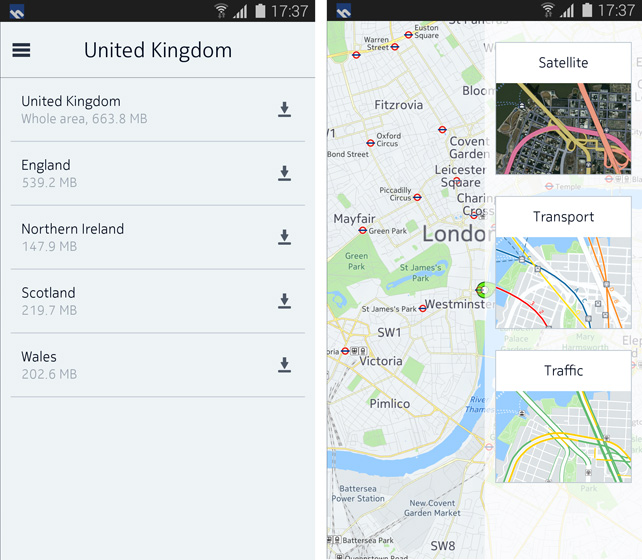 HERE currently owns as much consumer market of navigation apps as Windows Phone the market of smartphones. With a deal with Samsung they won’t change it. Will they succeed? I’m quite skeptical about it.