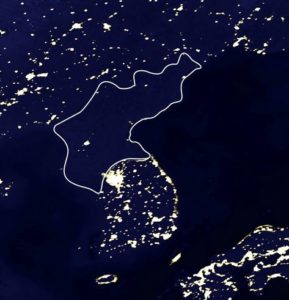 North Korea has been a blind spot of the political and geographical map of the world for ever. When you look at the night satellite image you can see the dark hole between China and South Korea. Kim Jong-il and now Kim Jong Un managed to run the country where citizens know as little about life in other places as we know how do they live. Not much. There is no Internet. No free TV. No independent books, history, knowledge. No press. Limited mobile phones… People are starving. When European journalist when to Pyongyang and managed to stay alone with a guard (there are always at least two guards to watch each others hands) he was laughing when heard about democracy. He thought it was a joke. He had never before heard about such a strange concept…

This week Google announced that as a result of the input of crowd-source cartographers from Google Map Maker  they have updated maps of a North Korea. Although the vast majority of North Korean citizens won’t be able to access these maps themselves, with internet access restricted to all but an elite few, it can be of a significant value for people in South Korea with family in the North or historical connections to the region, as well as more general observers from around the world.

To build this map, a community of citizen cartographers came together in Google Map Maker to make their contributions such as adding road names and points of interest. This effort has been active in Map Maker for a few years and today the new map of North Korea is ready and now available on Google Maps. As a result, the world can access maps of North Korea that offer much more information and detail than before. 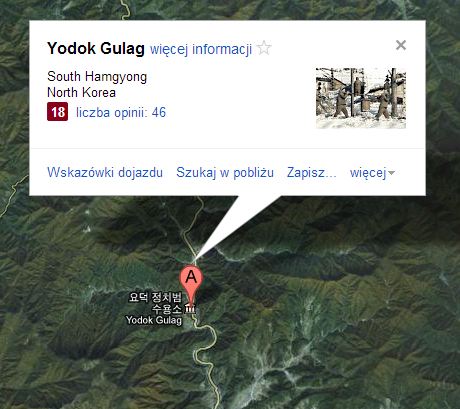 Of course internet is not the most serious medium. The map maker includes as well a names and points of the prison camps within the country. Although a lot of terrible things happened in there over decades the Internet including Google Maps has its own rules… therefore one can read for example reviews of gulags  ‘Best. Gulag. Ever.’ which are pretty funny 😉 but not when you thing about the context of the place.

In general I think it’s big. It’s bringing North Koreans closer to the world. The live in terrible conditions but hence their dictator has a nuclear weapon no country in world will risk attacking them and how can you do it when you actually don’t know almost nothing about the country… Let’s hope that once there will come a day when these people will realise the meaning of the word ‘freedom’. 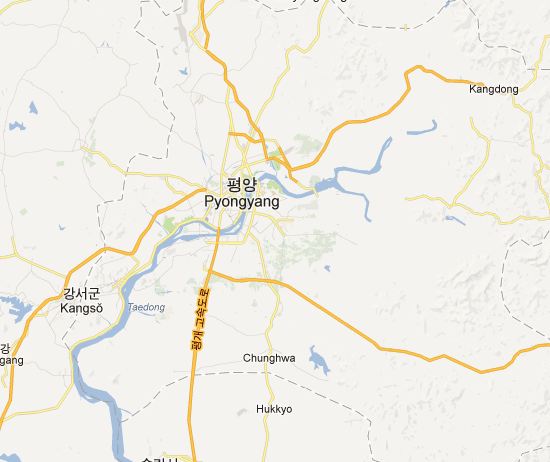 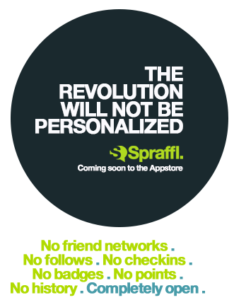 Spraffl is a new location-based app that goes against everything that we’ve seen over last several years. It allows you to post ANONYMOUS, location-based messages anywhere in the world open to everyone around you to read and comment. Founders actually call it ‘a social experiment’ and it is an experiment as there is no way that they can make money out of it unless it’s about developing the technology.

You might think it’s crazy idea but I my opinion it’s very refreshing concept. Almost* anti-social, when everything around is all about building community with Facebook, Twitter and other social networks…  (* almost as unfortunately the content can be shared via Facebook and Twitter). The content is build purely around the location. When you start the up it takes your location and that you can write what ever you want. People can then like, dislike or comment on your Spraffl. The only identification to the l is your location. No usernames, nothing. People can’t follow or friend you and vice versa. It’s completely anonymous. 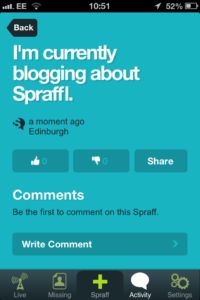 The dark side of  anonymity

But of course there is a downside of such a solution, abuse of this totally anonymous freedom. Spraffl developed a way to deal with it based on community self-regulation. If at least 5 people flag the message it will be removed. Simple, but good solution.

It’s funny to call but Spraffl is actually the first anti-social social network. No friends, no followers, no badges, no mayorships. Pure anonymity. I like it. In the idea of social network you’re never anonymous. That’s why it’s so refreshing to feel like it at least when spraffling*.