For a technology company as ubiquitous as Google, its track record at social networking has been nothing short of embarrassing. Google+, Google Buzz, Orkut, Lively, Dodgeball… No matter how hard the Internet giant tried, it only stumbled and failed in its attempts to dethrone Facebook and Twitter.

But now, Google is preparing to pull a rather promising rabbit out of its hat by developing Google Earth as a social networking platform. The plan is to let people put stories, photos, and videos directly onto Google Earth and tie their experiences to the source location. Google Earth Director Rebecca Moore, who first floated this idea at a recent event in Brazil, confirmed the development to this writer.

Moore was in Brazil to launch the stories of the Amazon rainforest on Google Earth’s interactive storytelling platform called Voyager, which rolled out with the new version of Chrome-based Google Earth in April this year. Once Voyager becomes open to public – Moore anticipates a two to three years timeline for this – anybody would be able to upload unedited content directly to it.

One distinguishing feature of Google Earth would be that it won’t bog users down with advertisements. Moore has been candid in her admission that Google doesn’t plan to monetize the project. “Google Earth is our gift to the world,” she says. “Google [already] has nice revenue from advertising, and not everything Google does has to make money.”

The platform would allow users to choose whether they want to keep their content visible to the public at large, effectively making it a part of the destination’s cumulative history, or share it only with a select few. And since Google wants to get as many people onboard as it possibly can, there seems to be no restriction on the type of content as well. “The story of your family history, the story of your favorite hiking trip – it could be anything. It doesn’t have to be profound,” Moore says.

However, this also immediately raises the question of privacy violation. How does Google plan to maintain the sanctity of the platform by dealing with potentially abusive or violent content? Because that’s a battle even Facebook is finding hard to win… That said, the idea of having thousands of people across the world share their memories, insights, tourist trivia and more in a communistic manner sounds very exciting. And who knows, in it, Google may finally find a social networking product that’s a crowd-pleaser. We hope to update you with more details soon!

Say thanks for this article (5)
Ishveena Singh
442 posts
Want to be an author?
The community is supported by:

It may be summer in the northern hemisphere but finally, after seasons of Starks shouting their battle cry and sashaying away, winter has finally come to Westeros. With it comes the beginning of the end of the series and the time to ponder whether the world will end in fire or ice.

Winter’s blustery arrival also brings a blizzard of internet activity, including five straight years of Game of Thrones being the most pirated show on television and a mountain load of memes that deluge the internet daily. As usual, I wanted to see where exactly these wintry winds of the world wide web were whirling strongest.

Twittersphere Tempest Strongest in the U.S., Brazil, & the U.K.

Which moments of magic and manipulation created the greatest stir across the seven kingdoms? Because Game of Thrones occasionally causes worlds to collide just as it tears them apart, it often indulges crossovers involving famous British entertainers. This time, Ed Sheeran supplied his vocals in a cameo towards the end of the episode that froze time and set the internet on fire.

Twitter Battle for the Iron Throne; The Ladies are in the Lead

After riding dragons and Dothraki steeds across all of Essos, is there anyone with a more suitable posterior for the Iron throne than Daenerys Stormborn of the House Targaryen, First of Her Name, the Unburnt, Queen of the Andals and the First Men, Khaleesi of the Great Grass Sea, Breaker of Chains, and Mother of Dragons? Yet if her subjects or small council have trouble getting through Danny’s many titles, perhaps Jon Snow is a better bet. Or maybe, since Cersei is already in located in King’s Landing, she should continue her reign, if only for the sake of convenience.

The people of the real and digital worlds were divided as to who they wanted as their next ruler, often split based on their hometown or motherland. Brazil (44%), the United States (23%), Argentina (4%), Venezuela (3%), and the United Kingdom (3%), specifically the cities of Rio de Janeiro (6%), São Paulo (6%), New York (2%), Recife (2%), and Belo Horizonte (2%) joined the unsullied behind Danny, spending support in the form of 89 thousand tweets.

Regardless of where they were most loved, all of the potential successors to the crown were most celebrated during their respective screen time based on this interactive map.

The King in the North Jon Snow’s tweets peaked during his scenes at the start of the show.

De facto ruler of King’s Landing Cersei Lannister’s tweets culminated during her scenes in the middle of the episode.

Mother of Dragons Daenerys Targaryen’s tweets reached their zenith during her moment in the spotlight at the very end of the premier.

Most filming in the U.K., Croatia, & Spain, but Didn’t Affect Tweet Volume

Map of Game of Thrones filming locations by country for entire series; locations from Google map supplemented with additional information from Telegraph article

Because we’ve followed the somber, stoic Starks since season one, the U.K., especially Northern Ireland, overwhelmingly has the most filming locations (28), followed by Croatia (14), Spain (9), Iceland (7), Malta (5), and Morocco (3). Spain entered the high risk high, reward game of thrones around Season 4 when Dorne comes into the picture, but made up for lost time. Did studio sets spur locals to tweet support for characters and houses associated with filming locations? Or did they at least become more active on social media for the show in general as a result? 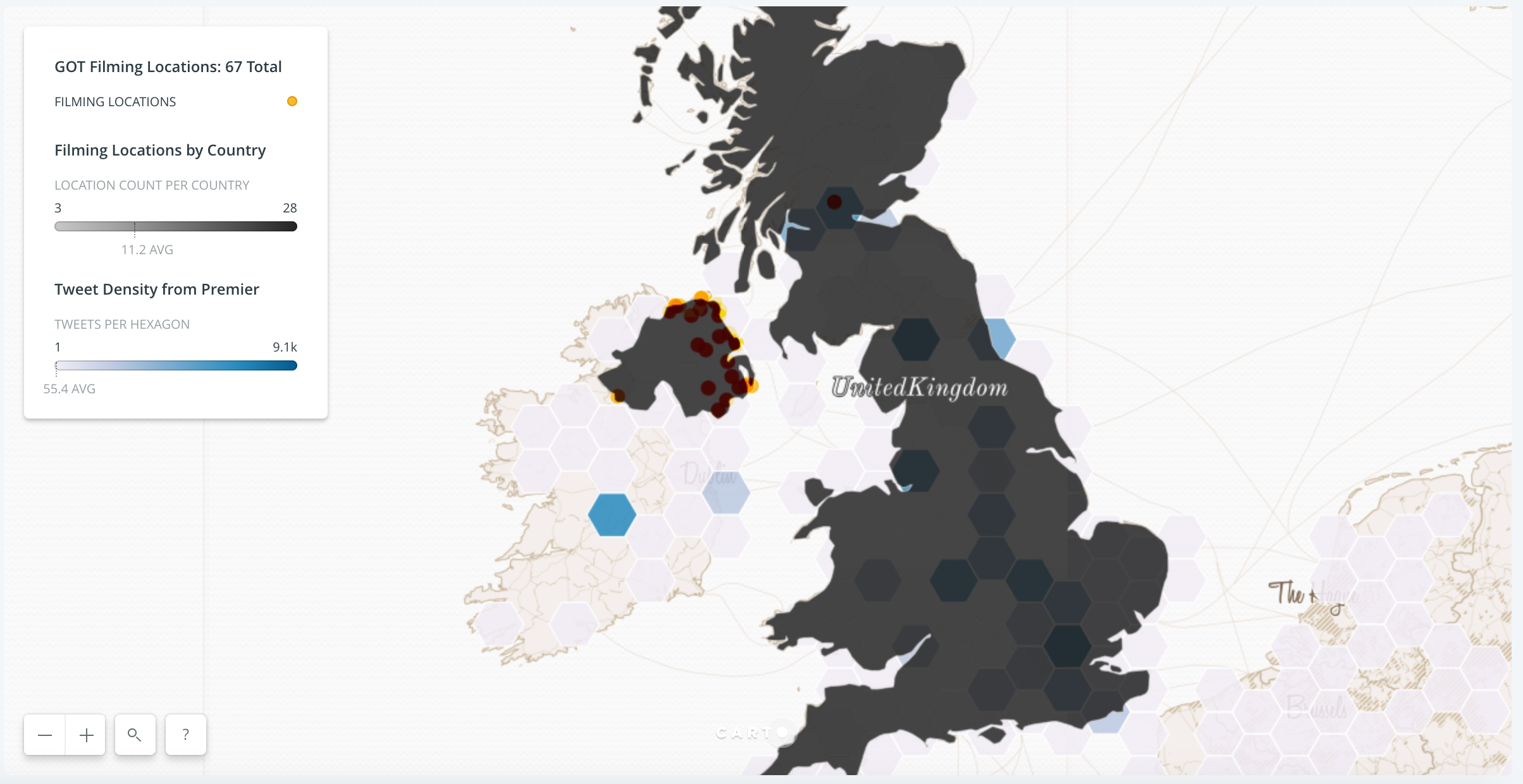 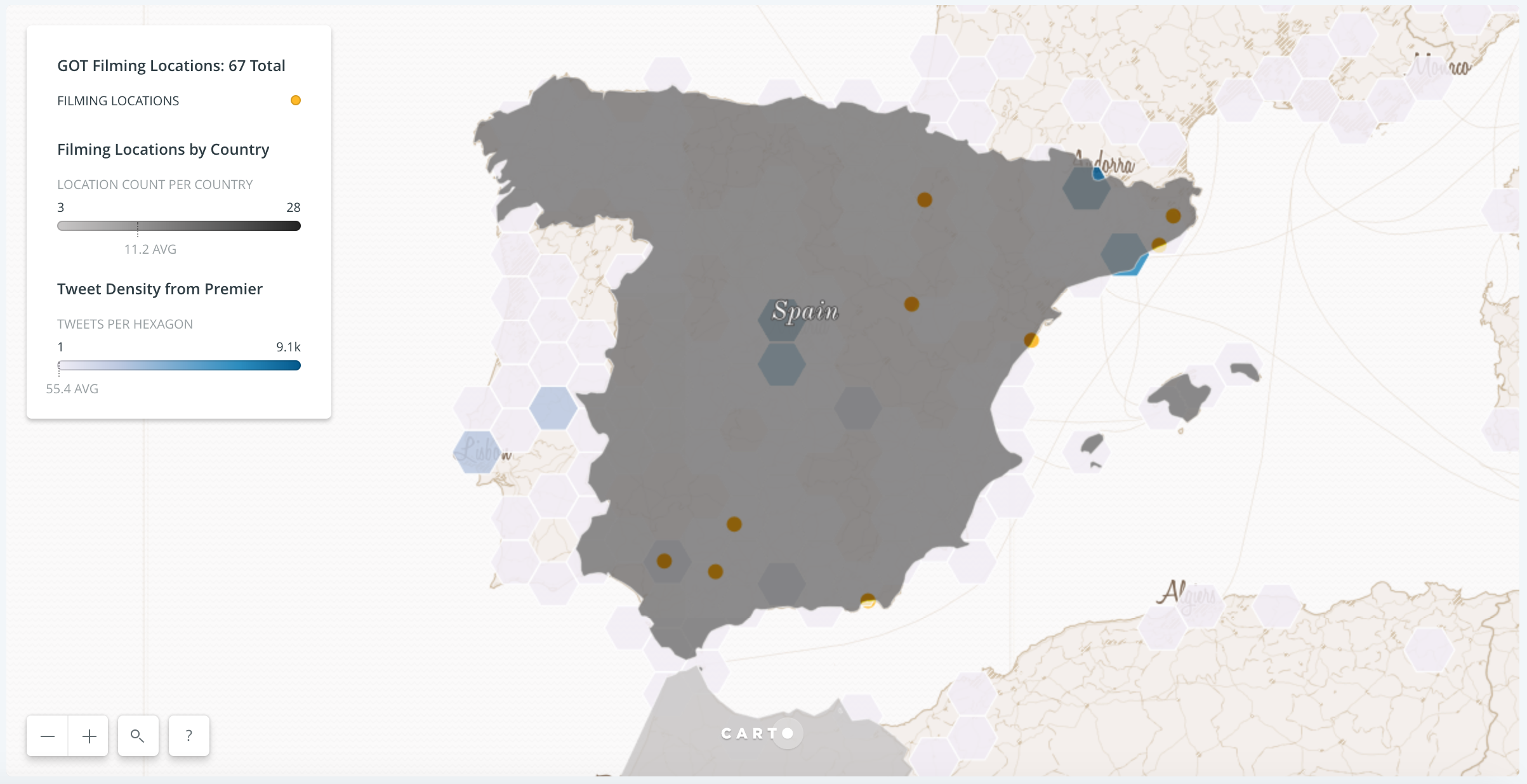 Black and Gay Twitter Dive into the Fray in the U.S. and  the Americas, Respectively

Just as Westeros is divided into houses for their respective kingdoms, so are American TV viewers divided into geographic groups. The New York Times identified “cities and their suburbs”, “rural areas”, and “the extended black belt” and the key players in the race for America’s iron throne, or couch. It also noted Game of Thrones as the fifteenth most socially and locationally divisive show out of the fifty most popular shows in the U.S., with its viewership concentrated in coastal cities and avoiding rural America; apparently “the only show involving zombies” to follow this trend.

But what does Twitter say? Black and gay subcultures are as sharp as Tyrion, charismatic as Daenerys, and ubiquitous as Varys’ little birds, especially when voicing views about popular culture on social media, so I wanted to listen for and map out their tweets. I focused on #ThronesYall, which usurped #DemThrones as the reigning Game of Thrones hashtag of Black Twitter last year. #GayOfThrones is an Emmy-nominated recap show, which sometime features actors from the HBO series, but it is likely also a rallying cry for thrones fans who are bearers of the rainbow flag.

Gay Twitter is less tied to any one country or mother tongue and was most active in the United States (37%) and Brazil (23%), and most prevalent in the cities of Buenos Aires (5%), Porto Alegre (5%), São Paulo (3%), Belo Horizonte (3%), New York (3%), and Rio de Janeiro (3%). The LGBTQI Twitter community in the various Americas hailed from similar cities as Danny’s followers and likely appreciated that she can converse in multiple languages like high Valyrian. Similarly, they tweeted in different tongues such as English (69%), Spanish (19%), and Portuguese (12%). True to form, many of the most frequent words accessorizing the 490 “Gay of Thrones” tweets were clothing-related, including”mostrón” (17%), “mostron” (13%), and “remera” (12%).

Where are my dragons, wolves, and lions?

In the end, Twitter showed some serious lady love, didn’t care about filming locations, and was all about the cameos. As usual, subcultures played an important role in fandom and were geographically divided. Finally, as with the RuPaul’s Drag Race Season 9 Finale, the United States and Brazil were the biggest fans.