All the 470,000+ lines of code behind Google Earth Enterprise (GEE) are now available on GitHub under an Apache 2 license. Apache 2 essentially makes it possible for any company (or individual) to build on top of GEE and release their own commercial software.

Google launched Earth Enterprise way back in 2006 to provide enterprise customers the ability to build and host private versions of Google Earth and Google Maps. However, in an effort to narrow down its’ focus, Google decided to deprecate GEE back in 2015 and kept the product on maintenance until March this year.

In an ideal world, Google would want its customers to transition to using Google Earth Engine on its cloud platform instead of running on-premises versions of GEE. But many customers haven’t transitioned away from GEE to other technologies and taking into their feedback into account, Google decided to open source GEE so that the community can continue to use and develop it as they see fit.

Of course, Google did plug their cloud service in the blog that announced that GEE will go open source by essentially saying customers can use Google Cloud Platform to run their GEE instances instead of using legacy on-premises enterprise servers.

The future of ArcGIS Earth

When Google announced the deprecation of GEE, it turned to Esri to ensure its enterprise customers were not left hanging without an alternative (Related: Google & Esri). Now, with GEE being open sourced, it’s going to be interesting to see if the commercial GIS industry decides to utilize the code to provide an alternative to ArcGIS Earth.

Amazing history of maps and diseases 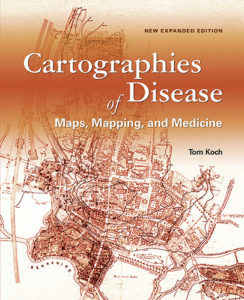 The idea that diseases have a spatial component and therefore can be mapped can be traced as far as the late 1600s. This period is the starting point for author Tom Koch, a clinical ethicist, gerontologist and professor, who was interested in the relationship between mapping and medical science. The motive behind his research that resulted in this book is that somehow, history seems to emphasize only one single historic example of medical mapping as the basis for its modern-day equivalent, obscuring a far more complicated (and turbulent) relationship between the two when examined in greater detail.

Although plague maps from the late 1600s form the earliest evidence of the relationship between mapping and medical science, the most well-known historical medical maps are those of John Snow, an English physician. His series of cholera maps of London in the mid-19th century showed a way of spatial thinking to help solve a medical problem (cholera outbreak), introducing the idea of a threshold population, a critical community-size above which the agent of a specific disease will thrive, and an epidemic can spread.

Although Snow´s work in the context of his day was insufficient, it led to a broader debate by contemporaries on the spread and origin of cholera, as well as how to improve Snow´s mapping approach. In hindsight, it turned out that the specific Snow case of the local outbreak of cholera in London in the 19th century and its accompanying topographic maps could be used as a model for medical science as a whole, laying a foundation for years to come.

The relationship between mapmaking and medical science since hasn´t always been a strong one. One reason for a divorce between the two is that breakthroughs in medical science such as the germ theory told local health officials where to look for causes for a specific illness, rather than using spatial and environmental analysis. Also, limits of reproduction technologies pervaded medical mapping through the early 20th century.

Interestingly, the maps reproduced in the book show that over time, the geographical scope changed from local to global. The notion that international port cities on international sea trade routes proved to be sources to where diseases “entered” a country, is illustrated by a series of case studies. But it is not until the 20th century that the question could be answered how local circumstances led to the outbreak of a disease. So-called “disease atlases” put disease outbreaks in a regional and global perspective, instead of local. It is during this time that medical geography and medical mapping were reborn as dynamic and probabilistic.

GIS enthusiasts will be happy to know that Koch devotes an entire chapter to GIS and medical mapping, where he states that the move from mainframe to desktop enabled to undertake research programs like those pioneered a decade earlier. Digital store of demographic and spatial data coincided with the evolution of GIS that became more web-centered. This process is ongoing and opens up new opportunities for medical mapping, which is illustrated by two new chapters on Ebola outbreak in 2013.

As the introduction of this book states, this is not just another cartography book. Instead, it focuses on how people over time came to use maps within the discipline of medical science. Koch describes very well how both mapping and medical science evolved over time and how one influenced the other, which makes a great read for everyone interested in mapping, medical science, and history.