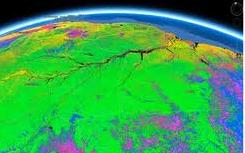 This must really be a great data mining platform for Geo/Earth scientist, researchers and the general public for awesome  geo-scientific queries and analysis. A great platform for change detection, map trends and quantity differences on the earth’s surface.

Courtesy of  EarthEngine.org , Google Earth Engine brings together the world’s satellite imagery — trillions of scientific measurements dating back almost 40 years — and makes it available online with tools for scientists, independent researchers, and nations to mine this massive warehouse of data to detect changes, map trends and quantify differences on the Earth’s surface. Applications include: detecting deforestation, classifying land cover, estimating forest biomass and carbon, and mapping the world’s roadless areas.

Below are some Google Earth Engine featured gallery, explore and learn more about this awesome product. Also take a look at the product videos Or visit the Data Catalog to explore our archive of satellite imagery. Certain features (such as data download) are restricted to members of our trusted tester program.

We have precomputed a number of interesting datasets using the Earth Engine platform, below. Click on each to learn more and preview the data as a global time-lapse or as a layer in a Google Earth client.

Interactive Landsat timelapse of deforestation of the Amazon rainforest, 1999-2011.
Drying of the Aral Sea: Timelapse

All areas of land more than one (1) kilometer from the nearest road, rail or navigable waterway.
Global Roadless Areas: 10 km buffer

All areas of land more than ten (10) kilometers from the nearest road, rail or navigable waterway.
Mexico percent tree cover

Provisional map of forest cover change in the Democratic Republic of the Congo from 2000 to 2010
Have fun!

iOS6 & Apple Maps. Two Main Reasons Why Is That Bad. 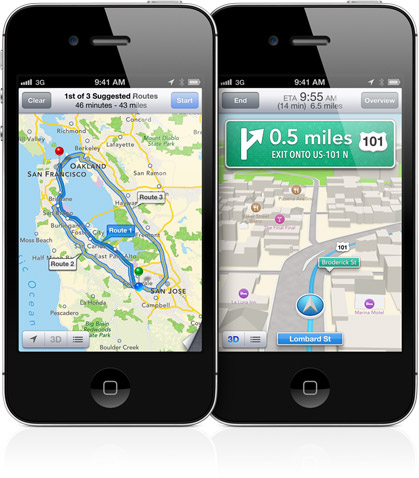 Back in May 2012 we’ve been discussing at Geoawesomeness what should Apple do with their $97.6bn cash reserves… very soon it appeared we were right… Apple Maps are out for several days already and they’re getting killed by users and critics (Gizmodo found literally 17 people how liked their iOS Maps). And rightly so! We’ll give you the main reasons why Apple Maps won’t be as good as Google Maps anytime soon:

1 .Geographic data is a key to success.

First and the most important thing – map has to be always based on geographic data and there are only few companies that can supply world-wide spatial data of acceptable quality: Google Maps through their API, Navteq (acquired  by Nokia in 2007 for $8,1 bln), TomTom and Open Street Maps. Trying to build their own mapping service Apple could not use Google’s or Nokia’s data, therefore they needed to licence it from what was left on the market: TomTom, OSM and other services like Yelp. Unfortunately (for Apple) Google and Nokia owns map data of the best quality. TomTom (which acquired TeleAtlas back in 2007 for €2.9 bln) is good but simply cannot be compared to Google, who’s Google Earth and Maps are based on decade of constant development and merging massive volume of data from . From the other hand the difference of Navteq (Nokia) and TeleAtlas (TomTom) is well reflected by the discepancy of their market capitalization back in 2007 and mainly related to better global coverage of Navteq data. So you can see that even comparing to Nokia, the quality of Apple Maps data is not really at the same level especially outside US and Western Europe and they cannot do anything about it.

2. You cannot build a mapping solution over the night.

As you recently read at Geoawesomeness the technology that stands behind Google Earth and Maps is something very sophisticated. Maps and Earth solutions has been acquired by Google in 2004. This means that it has been developed for several years already at that time. Over that time Google did something what they are really good at: something amazing;). They’ve actually changed the way people see maps, cartography, spatial information. They’ve actually built spatial awareness of people all around the world. Location context of many concepts, local search, places, location-based services, street view – it all started to be available and popular thanks to Google.

From the other hand Apple started to think about their map solution in 2009/2010. We’ve been following Apple mapping acquisitions sometime ago. It all started in mid 2009 when Cupertino quietly acquired Placebase – Maps API company. Than in 2010 – Poly9, a Canadian start-up that specialized in connecting mapping data with other data sources to create Google Earth-like visualizations. And finally in late 2011 they’ve bought C3 Technologies – Swedish Saab’s former military solution to automatically build 3D city models based on spatial areal imaginary captured from airplanes.

In theory these are components that are enough for a great map solution and it would be. In 2009. In 2012 Google has reached the level that is impossible to catch over the night. 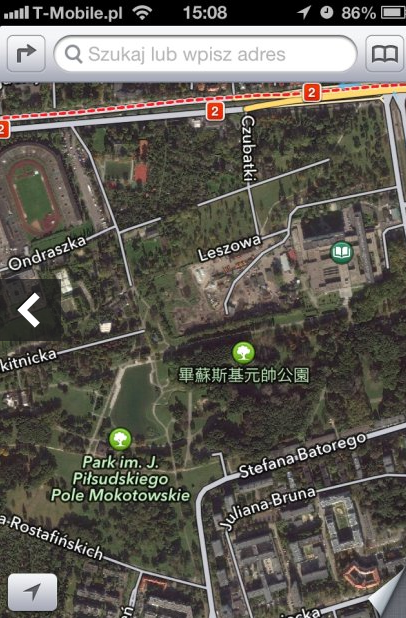 Park in the centre of Warsaw, Poland. Polish language has nothing to do with Chinese.