Freshwaters are extremely diverse habitats. They cover less than 1% of the Earth’s surface but are home to about 35% of all vertebrate species. More than in any other ecosystem, life of freshwaters is threatened at an increasing rate particularly due to pressures from energy, food and sanitation sectors. As a result from human influence, freshwaters from today are often modified habitats and other than this are affected by the impacts of climate change. The protection of freshwater life and the ecosystem services is therefore a crucial challenge for policy particularly in regard to the existing pressures from human activity (agriculture, industry, space consumption, etc.).

As a response to the urgent topic, European scientists have come up with the idea to create an online information source on freshwater biodiversity including spatial information and species distribution patterns from global to local scale. The vision was to provide a comprehensive information source to scientists, stakeholders at the science-policy interface and the interested public so that they can put greater emphasis on the conservation and management of freshwater biodiversity both in their everyday lives as well as keep them within future development actions.

The Global Freshwater Biodiversity Atlas was launched last month by BioFresh, a projekt funded by the European Union under the 7th Framework Programme. It comprises a collection of published and open access freshwater biodiversity maps in addition to a gateway for geographical information and spatial data at different scales. The map section includes four thematic chapters to filter for specific information on

a.       Patterns of freshwater biodiversity

b.      Freshwater resources and ecosystems

c.       Pressures on freshwater systems and

Numerous subtopics such as climate cange, land use change, pollution and eutrophication come up with the need to discuss actual problems and to deliver a whole information package about freshwater habitats.

Additionally, every map is accompanied by short articles with background information. It also provides links to publications and data sources related to freshwater biodiversity at the global, continental and local scale.

Similarly to crowd sourcing initiatives this project was  planned to rely on contributions from outside. Thus institutions, research institutes and every interested person, who is able to provide serious and updated information about freshwaters is invited to contribute material to the platform. BioFresh is putting together those pieces of information. It consists of a pan-European group of freshwater science and conservation experts from 12 research institutes and supported by key international organisations active in the field of freshwater biodiversity research and conservation, namely GEO Biodiversity Observation Network (GEO BON), the International Union for Conservation of Nature (IUCN), the Global Water System Project (GWSP), Conservation International (CI), Wetlands International, The Nature Conservancy (TNC) and the World Wildlife Fund (WWF).

Still, many – actually most – chapters and subchapters are yet to be filled, which is going to happen in time. The profit from the information to be extracted will come when the map collection is more complete. I think the project could handle to span the importance of large and small scale information at the same time. On a regional, continental or global scale, the gathered information facilitates to get an overview of the situation of freshwater life, to compare the conditions of different regions and to establish areas of actions, where regulations should be strengthened. Successful freshwater protection finally has to be realized on a local scale. Politicians decide about laws and regulations and therefore have to balance the different interests – including the one of freshwaters. Hence it is important to have access to updated, local information, which the platform could be able to provide in future.

Endemicity of freshwater fish on a global scale. The map identifies Central Africa and South East Asia before South America as the regions with most endemic species.

Chapter 1.2. “Climate Change and freshwater biodiversity” provides a map that projects the expected extinctions of freshwater fish in %, here in Europe. In the “article” register you will find useful information on the map (data, methodology, etc). 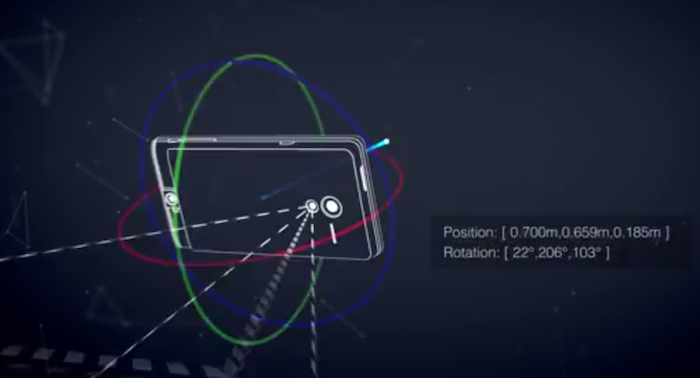 Google has announced the launch of its computer vision and 3D sensors project “Project Tango”: essentially a smartphone prototype with advanced 3D sensors. This new prototype doesn’t just have motion sensors but actually allows 3D scanning thereby opening up a whole lot of possibilities for Computer Vision and 3D Mapping/Navigation. The application that interests us geoawesome people the most – Indoor Mapping & Navigation!

The Advanced Technology & Projects group at Google is currently allowing developers to sign up for access to these “Project Tango” smartphones to develop interesting applications for the device in the domain of Indoor Mapping/Navigation, Games & more and if you are interested, you will have to submit your ideas to Google by March 14th, 2014.

In the official page for Project Tango, Google questions: What if you could capture the dimensions of your home simply by walking around with your phone before you went furniture shopping? What if directions to a new location didn’t stop at the street address? What if you never again found yourself lost in a new building? What if the visually-impaired could navigate unassisted in unfamiliar indoor places? What if you could search for a product and see where the exact shelf is located in a super-store?

Its quite interesting to be able to navigate inside buildings and have a visual perceptions to all this. Google isn’t the only tech giant that is looking at 3D sensors and mapping; Apple had acquired a 3D sensors company “PrimeSense” late last year. QualComm had acquired “GestureTek” in 2011. With the advent of Location Based Apps and Information, Indoor Mapping has become very important and certainly we will see these 3D sensors and scanners being part of everyone’s phone in the coming years.

Got any interesting ideas for Project Tango? Here’s the link to the official Project Tango Page where you can submit your ideas 🙂