In the last 10 years, the way we interact with our world has undergone a paradigm shift – be it the smartphone revolution or the way we look at digital banking and virtual currencies. On one side we have several studies that now exploring the human-technology interactions and the increasingly evident technology-addiction and on the other hand, we have elections! I cannot think of another aspect of our lives in the modern world that has not been affected much by technology apart from Elections.

When you come to think of it, most fields right from agriculture, medicine, contruction, clothing, transportation, communication to navigation has technology playing a bigger role except for Elections. We still have many countries using paper ballots for votes!

In this scenario, this particular press release by ESRI and iPrecinct, a campaign and organization management startup regarding their partnership is a good indicator of the elections and election campaigns getting onto the technology wagon, finally! iPrecinct will now utilize ESRI’s GIS software, Web GIS systems and geodatabase management applications to further simplify the process of election campaigning and organization much easier.

What this means for Election Management?

Well, as geoawesome people we all know how the world is moving from e-governance to g-governance (geospatial governance), how all databases are now getting transformed to geodatabases. To put it simply, all political parties will now be able to visualize their campaign efforts on a map with much better results. Imagine having all the benefits of Big Data analysis combined together with the power and intuitivity of maps! This is precisely what ESRI is going to bring to iPrecinct’s software solution. Election GIS!

In the largest democracy in the world, India, we have the parliamentary elections this year and that means getting the Indian Electoral system to coordinate this massive event in a matter of months. Although few political parties in India are already using some form of Election management system, I doubt the extent to which they are used. With more such GIS and Election management partnerships this could change.

I am amazed by ESRI’s vision with emerging fields where GIS is yet to become the mainstay be it Ocean GIS or now Election GIS. No wonder ESRI was voted to the top of Geospatial World Survey 2013.  Oh, speaking of GIS for Elections, ESRI’s Federal GIS Conference 2014 is up next month.

What do you think about GIS for Elections?

The Research Map of the World

In the last 100 years, the human race has come a long way, be it the innovations in transportation, communication or any other aspect of modern life. It is interesting to note the distribution of researchers across the world. In an increasingly science-driven planet, this map is a good indicator of which countries place a higher prize on R&D : “The Research Map of the World” 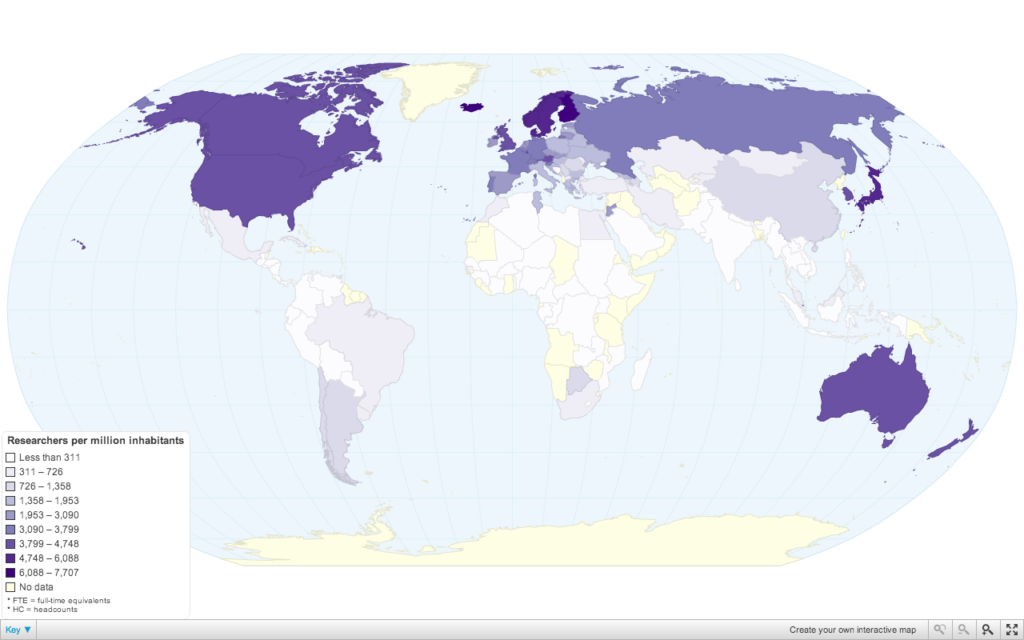 What’s the total number of researchers in the world: 1,080.8 researchers per million inhabitants.

When we say Research today, i suppose a majority of us have a mental image of a researcher in a white coat sitting in front of a computer with some interesting looking equipment around them. PhD comics are rather quite popular on social media 😉 Nevertheless, these numbers are probably a clear indication of the “science-driven” world that we live in.