Editor’s note: This article written by Siu Jione is part of the “Young and Geoawesome” series. The series aims to encourage young professionals to share their passion for all things geo and thereby build a more diverse, inclusive and welcoming geospatial community.

GIS is an amazing tool. Given the right data and accessibility to tools, it can help us transform the lives of communities affected by climate change and disasters. When I started in this field, I was unaware of the volume and type of data collected by different organisations. I was also unaware about how some projects could not access or use this collected data. In some instances, some of the communities had limited to no access to their own data. Little did I know, that I would be using GIS to support communities for climate change and disaster risk management initiatives.

The beginning of my GIS career

I started my GIS career as a Junior Technical Research Fellow at the University of the South Pacific in 2014. Over the course of the four years working in this position, I was responsible for the management of all the GIS operations and provision of technical support to the University of the South Pacific/ European Union-Global Climate Change Alliance (USP/EU-GCCA) project team.

The main aim of the USP/EU-GCCA  project was to improve the level of understanding of climate change in the Pacific region. The project had three main components: research, capacity building and community engagement. We worked with over 40 communities from 15 Pacific Island Countries and territories (PICTs). In reality, each community that participated in our project experienced the impacts of climate change and natural disasters at varying degrees. 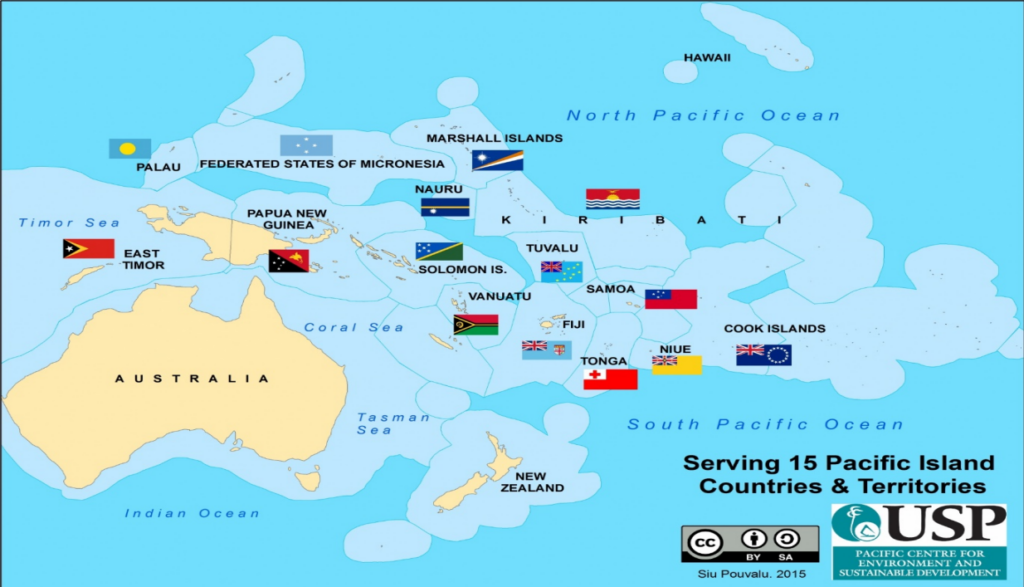 In the implementation phase of the project, communities with water shortages had water tanks installed. Communities with food security issues had seeds and livestock brought in. Some communities were provided with technical workshops. Many communities that experienced floods, king tides etc had sea walls constructed. Spatial data was collected and analysed to determine areas and households at risk and identified resources etc. I noticed that our project and other organisations collected so much data of the same communities. For some communities, there were data duplicates. Each organisation had specific objectives to meet. Therefore, the data and methods of data collection, processing and dissemination were specific to that organisation.

This created a collection of incompatible datasets with different file structures and formats that did not support or encourage spatial analysis. At the end of each project, the data was only accessible to the implementing organisations and donors. Not even the community whose data had been collected accessed their own data. It was a classic example of data everywhere but unusable to everyone, particularly the ones whose data had been collected. Surely, there had to be a better way!

To overcome this problem, our Project team came up with the idea to develop a community disaster risk mapping toolkit. Basically, the aim was to ensure that communities will always have access to their own data. In fact, providing a tool that communities can use to drive their own initiatives is the essence of community empowerment.

Firstly, I carried out some research and learned about Participatory GIS (PGIS). PGIS is a participatory approach that involves data collection and mapping for community driven initiatives. The approach empowers communities by encouraging them to identify their own risks and prioritise issues based on their values. Next, I looked at how PGIS can be used to support climate change and disaster risk management initiatives. Interestingly, many of the communities we worked with had existing decision making bodies that led the community. Also, some had poor internet access. So, the toolkit was designed specifically for the context of these communities. After leading a small team to develop and pilot a community mapping toolkit, we launched the toolkit within six months. It aimed to encourage communities to have a direct involvement in understanding and providing solutions to issues that threaten their livelihoods and security.

Basically, the toolkit is a step by step guide for communities on how to collect data, process, carry out some simple spatial analysis and present it on QGIS. It consists of a printed step by step manual, a flash drive that contains a soft copy of the manual, QGIS software, Apache Open Office, VideoLan (VLC) media player, spatial data for learning tutorials and google images of their community. At the time of development, many communities had no access to GPS devices. Free data collecting apps such as QField had not been available at the time.

So, instead of providing GPS devices, each toolkit included a printed satellite image of each community for data collection. A soft copy of the image was included for georeferencing, data entry and digitising in QGIS. Basically, this was to ensure that communities had the resources and skills to carry out any project in the future. Open office and VLC were provided because many laptops and computers in Pacific communities often did not have Microsoft Excel or media players. These software were provided as a backup for users to be able to have spreadsheets for data entry and a media player to access the video tutorials. 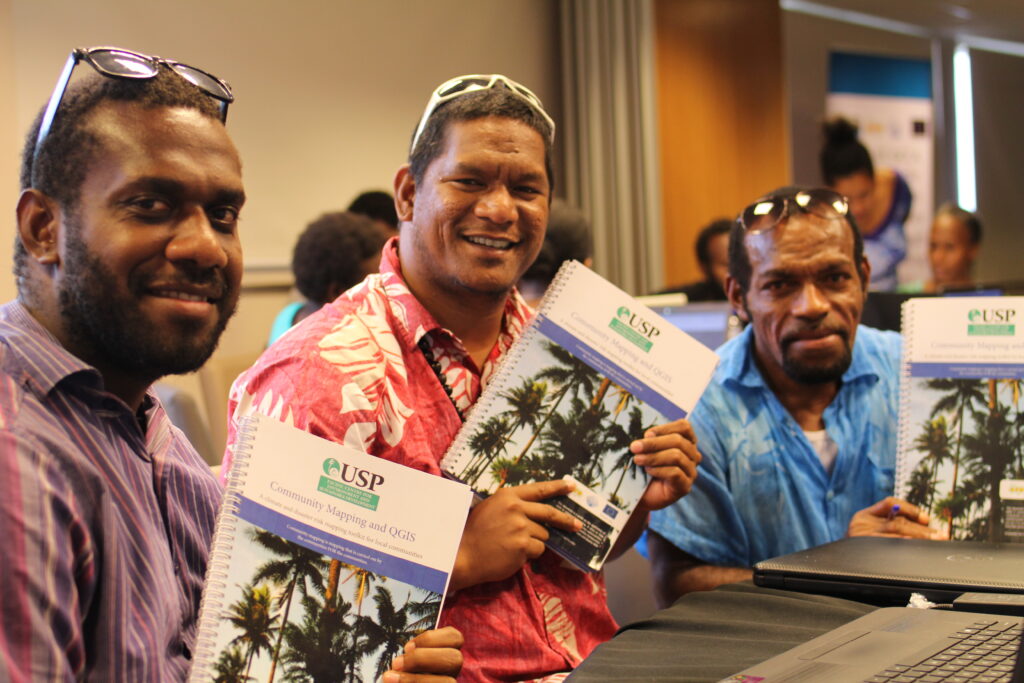 Country coordinators with the toolkit at the EU-GCCA Regional workshop, Vanuatu.

Data collection for the GIS component went side by side with the rapid vulnerability assessment. Generally, communities were trained to use the IVA and GIS. Participants identified their community’s five livelihood assets (Natural resources, Infrastructure & services, Finance, Human Resources and Institutions & Governance). Additionally, they identified their seven human security objectives (ecosystem health, community health, security of place, water security, food security, income security, energy security). After that, they rank their vulnerability based on their experience and knowledge.

Additionally, the toolkit teaches them how to collect data without GPS devices. It also uses methods that are suitable for communities and to rectify the findings of the vulnerability assessment. Data processing and analysis was carried out in QGIS and presented alongside the IVA results. Between 2015 to late 2017, I trained our country coordinators and community members from the 15 PICTs. In due time, they trained stakeholders in their country to support their climate change and disaster risk management initiatives.

In one of the workshops in Tonga, three farmers from Nakolo village attended. All had never used a computer before but were keen to learn. At the end of the workshop, they presented the results of their vulnerability assessments. They highlighted that food security was the major issue faced in their village. However, when they presented their resources and risk maps, the presenter learned that food security was not the main issue. The village had large agricultural plots of yams, pineapple, banana, watermelon and mixed cropping. Interestingly, the three farmers reached the conclusion that food security was not a priority area! This is the essence of PGIS! 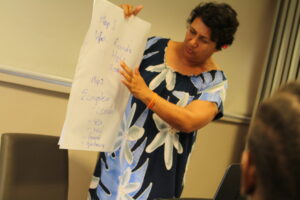 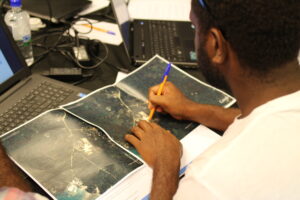 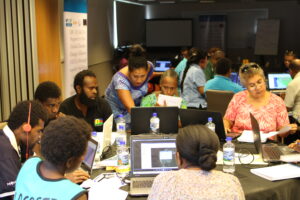 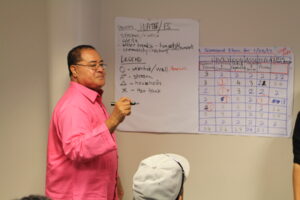 As a result of these workshops, the toolkit gained interest from stakeholders in Fiji, Nauru, Vanuatu, Tonga and Tuvalu.

The communities weren’t the only ones that gained from this project, I also benefited as well. In 2015, I was the proud recipient of the University of the South Pacific Vice Chancellor’s award for Innovation, for the development and implementation of the toolkit. I also pursued and completed a MSc in Climate Change with the aim of testing the effectiveness of the toolkit as a participatory approach.

How have communities used it?

In 2017, I collaborated with UNDP to facilitate a workshop to support the GEF5 Ridge 2 Reef project in Nauru. The workshop consisted of civil servants, practitioners and community members from 5 districts in Nauru. Participants included, youth, men, women and elderly. One of the highlights of the workshop was seeing how the community members organised themselves. The more tech-savvy youth carried out the data collection and analysis. Whereas, the older men and women shared historical knowledge of their natural resources.

In one of the groups, A 71 year old retiree, carried out the mapping in the first two days. However, as the level of difficulty increased, he returned with his grandson who then carried out the rest of it. At the end of the workshop, the 71 yr old presented their map. It showed a before and after map of coastal sites where a rare octopus species was once abundant but now very rare. As a result, they developed an action plan of which they intended to mobilise their community to establish a marine protected area. 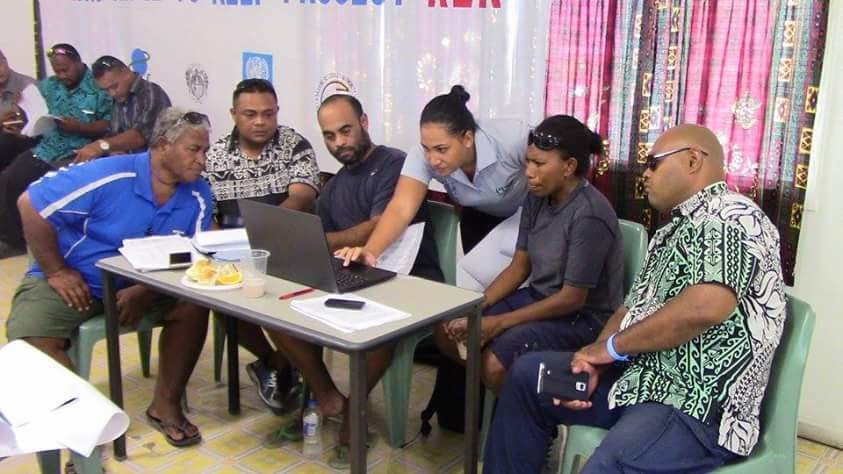 Subsequently, I collaborated with the Anglican Diocese of Polynesia and co-facilitated a two week workshop. The workshop focused on building resilience within the church youth, with emphasis on climate change and disaster risk managament.  The workshop was held in the Fasi moe Afi parish in Tonga with participants from Fiji, New Zealand, Tonga and Samoa. Participants included youth and men, women and members of the clergy of the Fasi moe Afi parish. The first part of the workshop covered the vulnerability assessment and the second part focused on the community mapping toolkit. 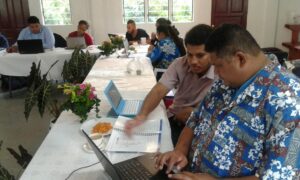 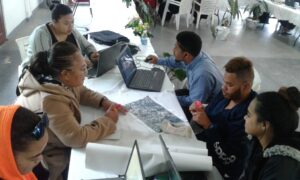 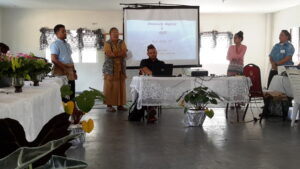 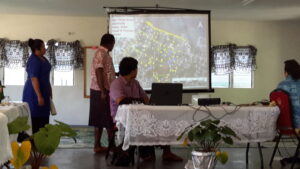 In February 2018, Tonga was hit by Category 5 severe Tropical Cyclone Gita (TC Gita). Before TC Gita hit Tonga, the group that had been trained in the CIVA and GIS in Tonga carried out a vulnerability assessment. They identified houses within their communities and provided reinforcements or evacuation sites to move to. Homes that were occupied by elderly people or people living with a disability and provided assistance. TC Gita caused a lot of damage to infrastructure and agriculture and many homes.

The Fasi moe Afi Anglican group, carried out a post disaster assessment, mapping and categorised at-risk areas into low, medium or high. A damage assessment report was submitted to their head office in New Zealand. As a result, they received 2 containers of supplies and relief and was distributed to the affected homes. More on this story can be found here. The knowledge and skills from our workshop have empowered the young Anglican youth to present at the Pacific GIS/RS User Conference in Suva Fiji and the Moana Water of Life conference in Lincoln UK.

“I was born and raised here in Fasi moe Afi and I grew up in this parish. A few years ago, I was the priest looking after this community. Not once did I know that my neighours had no water supply. This workshop has opened my eyes. I have seen on these maps the many issues that people in this community are facing. We will take this information and present it to our leaders so that we can do something about it”. Father Sione Uluilakepa. 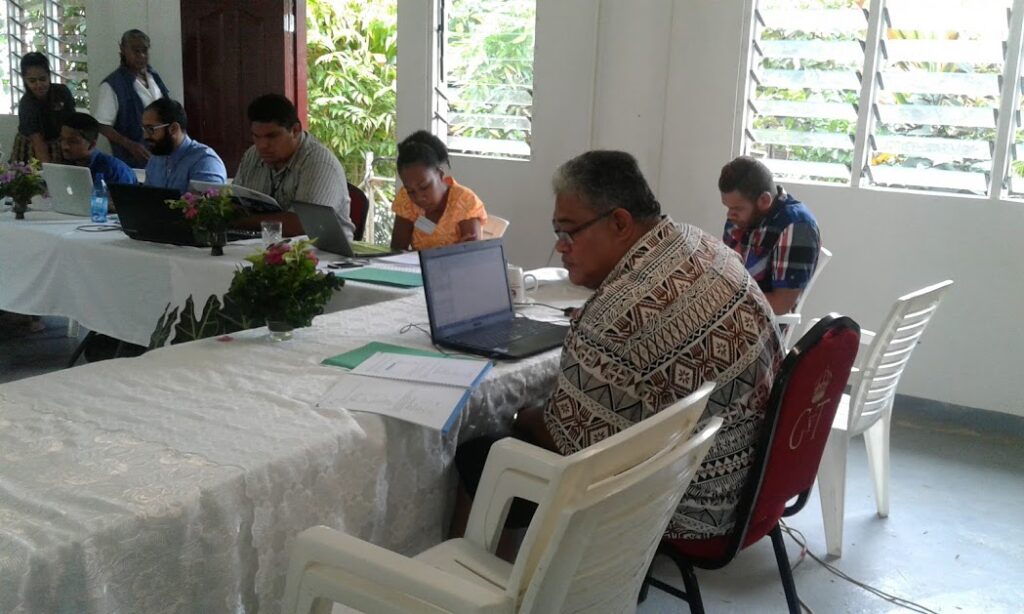 GIS is a very powerful tool. Communities can use it to building resilience against climate change, improve their livelihoods and for disaster risk management. We only need to simplify it!

Say thanks for this article (4)
Siu Jione
1 posts
Want to be an author?
The community is supported by

Celebrating the Top 100 Geospatial Companies of 2022

Can you believe its already the 1st of August? 2022 still has another 152 calendar days to go and 110 weekdays which means that it’s time for the Geoawesomeness team to start preparing the nomination and selection process for selection the #GlobalTop100Geo 2023 edition. BUT before we get started on that let’s take the time to actually celebrate the current companies that made it to the 2022 list!

Starting today, we are going to be doing just that on Twitter, Facebook and LinkedIn by highlighting one company per weekday starting today until 16th December. Stay tuned and keep track using the hashtag #CelebratingGeo2022 and #GlobalTop100Geo