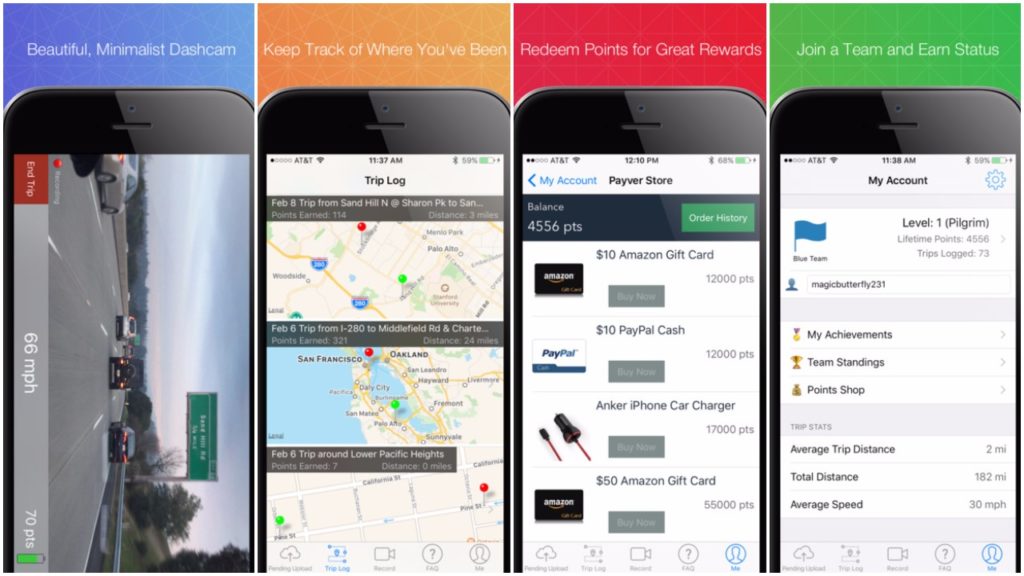 When Waze was born, it offered users something the ever-popular Google Maps wasn’t– real-time updates from real-life drivers. Now, two ex-engineers from Tesla’s Autopilot team and a former computer vision expert from iRobot are trying to replicate that winning formula for self-driving cars.

Last December, Andrew Kouri, Erik Reed and George Tall formed Lvl5 – a 3D mapping and localization startup that builds computer vision software for high-precision maps. The technology can help an autonomous vehicle to ‘see’ the road by recognizing different elements on the street, like traffic signals, street lights, sidewalks, lane markings, etc. The startup is claiming an accuracy of within 10cm.

Now, to make the project a success, Lvl5 needed data. Tons of data. All reflecting the latest road conditions. To deploy its own fleet of mapping vehicles à la Google would have proven too expensive. And there could never be enough such vehicles updating the information constantly all over the country. Crowdsourcing was the only way to go.

So, the trio designed an iPhone app called Payver – a dashcam that would pay users up to $0.05/mile to collect data. For initial adoption, Kouri adopted a really clever marketing strategy. He went to the San Francisco International Airport, started knocking on the windows of Lyft and Uber drivers, handed them free phone mounts and got a ton of people to sign up for his app. In three months flat, the startup had gotten around 2,500 drivers onboard and was able to map almost 500,000 miles across the United States.

You can also get in on the program by downloading the app and converting your car into a cool mapping vehicle! Though your ‘home to office and back’ route probably won’t get you a significant amount of money, you can do plenty of cool stuff like maintaining a trip diary to find out better routes, collecting evidence in case of a collision, or simply competing with your friends to see who’s the first one to map the roads near you!

Lvl5 says that it is currently testing out its pilot program with a major automaker, though it won’t take names just yet. The ultimate aim to get as many automakers enrolled as possible, and charge them a monthly fee in return of updated maps.

The startup is convinced that it has a better model in place than Mobileye, HERE or TomTom because its technology can make self-driving cars a reality much faster than LiDAR-based programs can. Though computer vision is an approach Tesla is also betting its money on, how successfully Lvl5’s plans pan out is something we will have to wait and see.

#Business
What is the metaverse and why should geospatial enthusiasts care about it?
Sowmya Somanchi 06.29.2022
AWESOME 5
#Business
How the EU Space Programme is contributing to the EU Green Deal.
Vanessa Alexakis 07.19.2022
AWESOME 0
#Business
Funding in the geospatial industry – the who and how
Hassan Safieddine 08.1.2022
AWESOME 3

Cognitive map of the United States

In new research, academicss were able to model and study the cognitive map of the US states. Cognitive maps inform how people, on average, make sense of the world they live in. On this cognitive map, California is closer to Washington state than to Nevada, where West Virginia is closer to South Carolina than to Maryland, and where Ohio is close to the center of the country.

This US cognitive map was drawn by A. Koch (University of Cologne), N. Kervyn (Louvain School of Management) M. Kervyn (Free University of Brussels) and R. Imhoff (Mainz University) by collecting results from over 1300 US citizens from the 48 mainland US states. Their novel approach published in Social Psychological and Personality Science (http://www.spsp.org/news-center/press-releases/cognitive-map-usa-ideology-prosperity) combines cognitive science, geography and marketing.

The authors computed this map by providing a deck of cards to US citizen from across the US recruited online. Each card represented one of the 48 mainland states. Participants were asked to organize these cards on their screen by grouping together the states that they though were similar. The authors then analyzed these results using multidimensional scaling which reliably led to the US cognitive map displayed above. Further polling of US citizens allowed the researchers to interpret this map. Results showed that the states are organized along a geographical axis (east-west) and an ideological axis (atheist-religious; conservative-liberal). The cognitive map is thus more influenced by the perception of states as religious or not than by the north-south dimension. In fact, the ideological dimensions religious-atheist and conservative-liberal, and the prosperity dimension uneducated-educated all explained the states’ position on the cognitive map better than north south (higher numbers in the parentheses in the map indicate higher explanatory value). Additional analysis using census data led to the same conclusions. 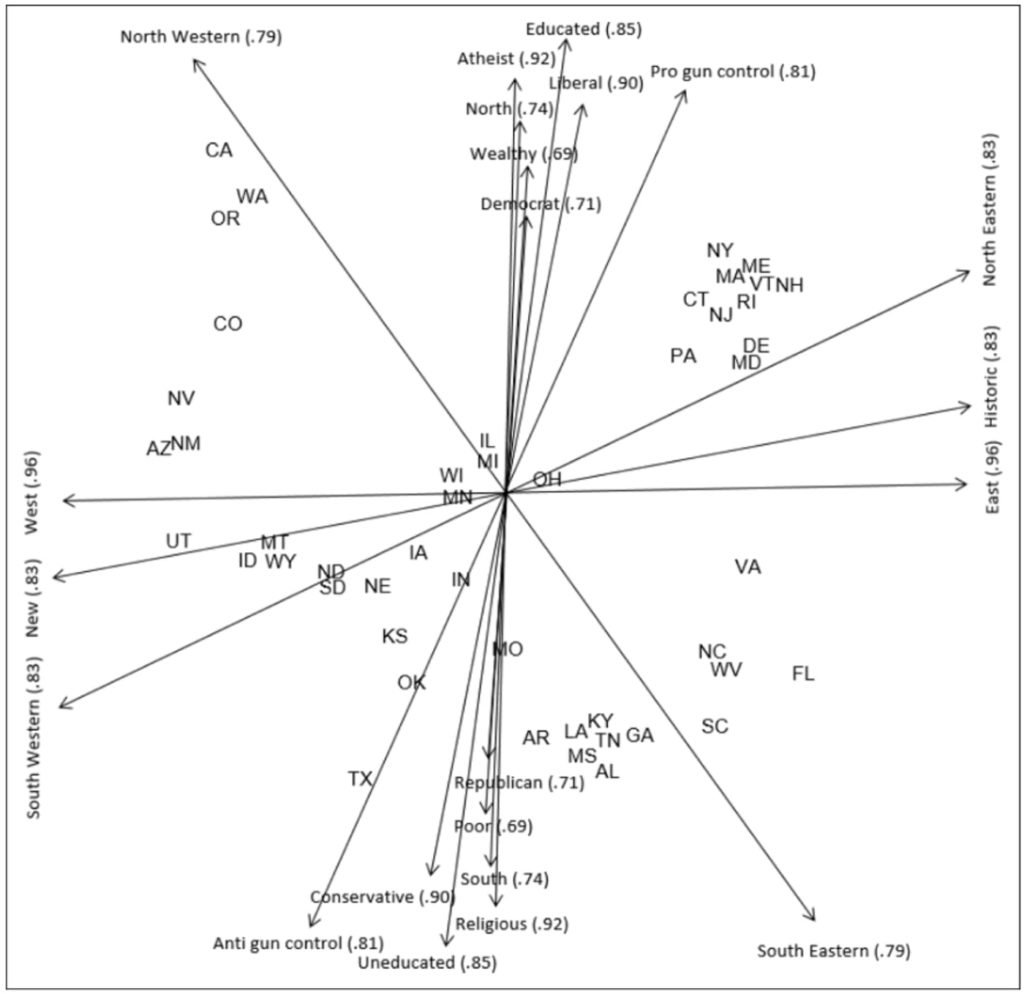 The cognitive map shows that the US states are organized in a number of clusters separated by wide gaps. The maps thus help visualize the great divide between rather liberal and rather conservative states debated during the past few presidential elections. There is also a possible historical interpretation of this map as, on the east coast, there is a clear division between the former union and confederate states.

Another consequence is for the tourism industry. For a given state’s tourism office the map can inform them about the states that are close to it in cognitive distance and thus likely to have a positive view of their state. On the other hand; it means that they could position their state as an exotic destination for traveler from states that are far away on the cognitive map.