Geospatial World Forum 2017 from the eyes of a geo-student

The city of pearls had more to offer this time apart from jingling bangles and awe-inspiring architectures between the dates 22nd to 25th of January exclusively for a geo student. An event of such great magnitude where leading persons from pioneer geo-industries make a technological show, is a must attend for every geo student.

Geospatial World Forum 2017 had clearly pointed out that the geo-spatial industry is not a domain to be treated separately but an industry which in itself is penetrating into every other domain in a compulsive manner heading for the next level of advancements. The geo-buiz summit reaffirmed the above statements when Marc Melviez, Director & CEO of Luciad referred geo-spatial technology as the ‘next disruptive business model’.

The theme of GWF 2017 ‘Deep Learning + Artificial intelligence’ took me to the next era where ‘Data is the new currency’. Probably 2019 will witness the Augmented Reality shopping as Bengt Kjellson, Director General of Lantmatriet said. The scarcity for authenticated data is broken by the geo-spatial industry where every second thousands of geographic data are generated through satellites. With enormous data availability the process of deep learning is initiated to develop artificially intelligent systems. The discussions of the theme panel had an odd man out from the homeland, Vishal Dupar, Managing Director of South Asia NVDIA, whose presentations where concerned around the Indian problem such as poverty, health care, transportation and society which made me understand that Deep Learning and Artificial Intelligence can be a solution for all luxuries as well as necessities. Recollecting what Ed Parsons, geospatial technologist from Google said ‘With Deep Learning and Artificial Intelligence we can do things on a scale never possible before’. 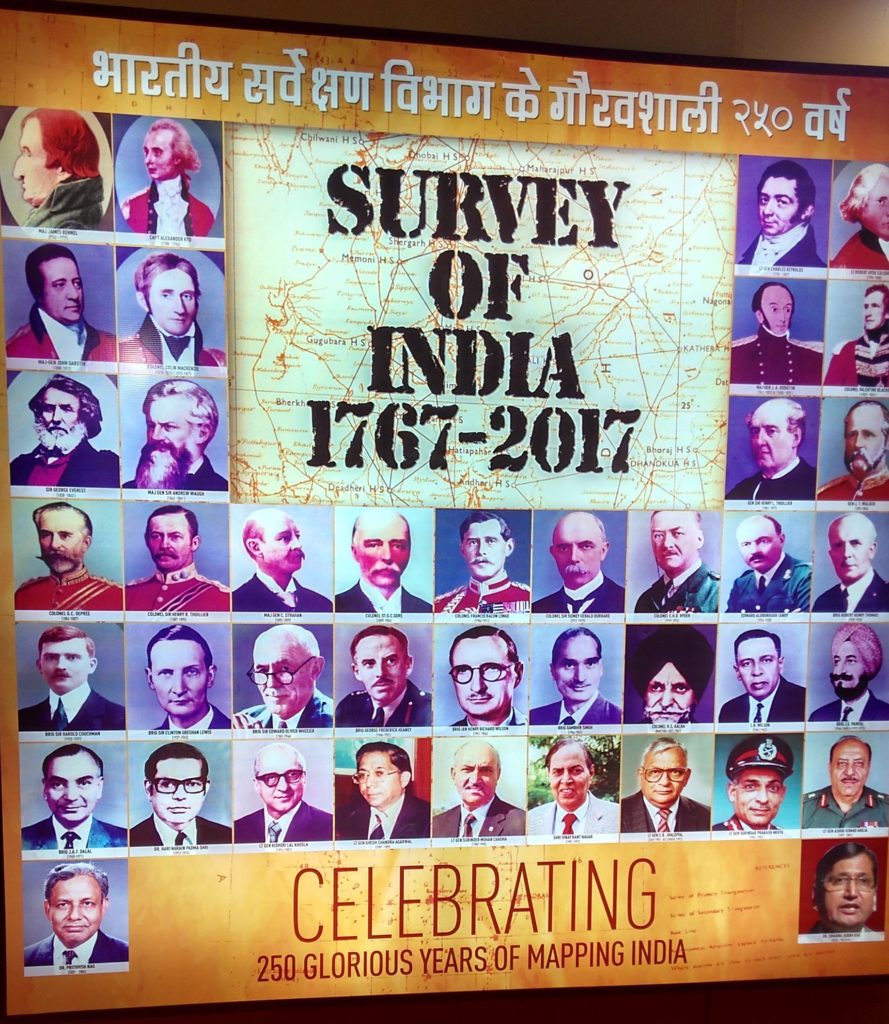 The vibrant inaugural ceremony had many remarkable moments, the witnessing of which will be cherished by me forever.  The inaugural address by Shri. M. Venkaiah Naidu, Minister of Urban Development and Information Broadcasting brought in lights about the GIS based Indian Government projects, one such is AMRUTH, GIS based Urban Development Master Plan for 500 cities in 26 – 30 months. Yet another proud moment was the celebration of 250 years old Survey of India, it was indeed the exuberance which filled the hall.

The Two living legends of the Geo-spatial industry

An historic moment, where you get to witness the two living legends of the geo-spatial industry sitting together and discussing their visions for the first time ever. What else a geo student can imagine about? Jack Dangermond and Charlie Trimble whose products I have been using in practical sessions of Academic syllabus. While Jack reflected a deep concern towards society and the future with statements like ‘Our world and development is not sustainable’, ‘Our world is increasingly challenged’ and ‘I am worried about the future’, Charlie Trimble was full of optimism focussing more on the technological advancements claiming that the technology will become much better than the problem itself in the future. It was undeniably a great sight for my retina to witness the respect they shared on each other’s vision though there were differences in their beliefs. 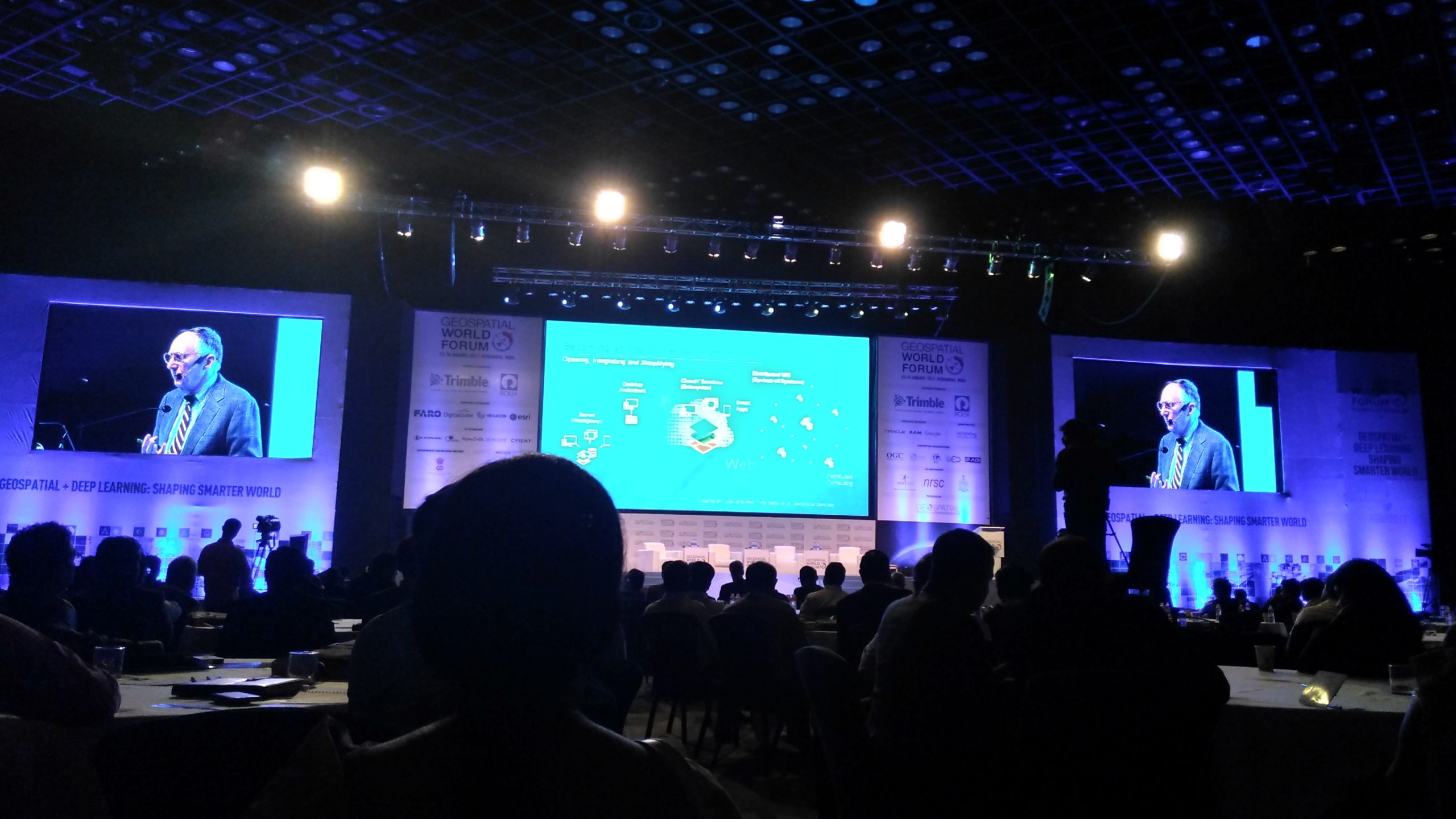 Watching Jack Dangermond on the stage was truly something!

Later with multiple parallel sessions I was fascinated towards the workshop on Deep Learning and Artificial Intelligence by Sundar Ramalingam Head of Deep Learning from NVIDIA, India. Rather than being a workshop it was more of a discussion-cum-learning platform. Attendees from various dimensions were present ranging from police officers to professors, army officers to entrepreneurs and me being the only student. Shooting out questions as a student without any hesitation was a privilege I enjoyed among other attendees of the workshop. At the end I figured out a rough sketch on how Deep Learning and Artificial Intelligence is all set to make the next Industrial revolution.

The next sessions for which I blocked the timings was for Smart Cities and Defence and National Security. Smart Cities projected the immense possibilities available with Geo-Spatial Industry combined with Deep Learning and Artificial Intelligence. Defence and National Security was filled with men in olive green uniforms, while they welcomed the geo-spatial applications as a solution provider for stressing defence and national security problems they were hesitant towards the adoption of the artificial intelligence concept since artificial intelligence hasn’t gained the full confidence from the men in olive shirts. Explainability, auditability, accuracy, responsibility and fairness of AI has to be considered before the acceptance of AI in Defence and National Security claimed Lt Col Ashutosh Verma representing Indian Army. 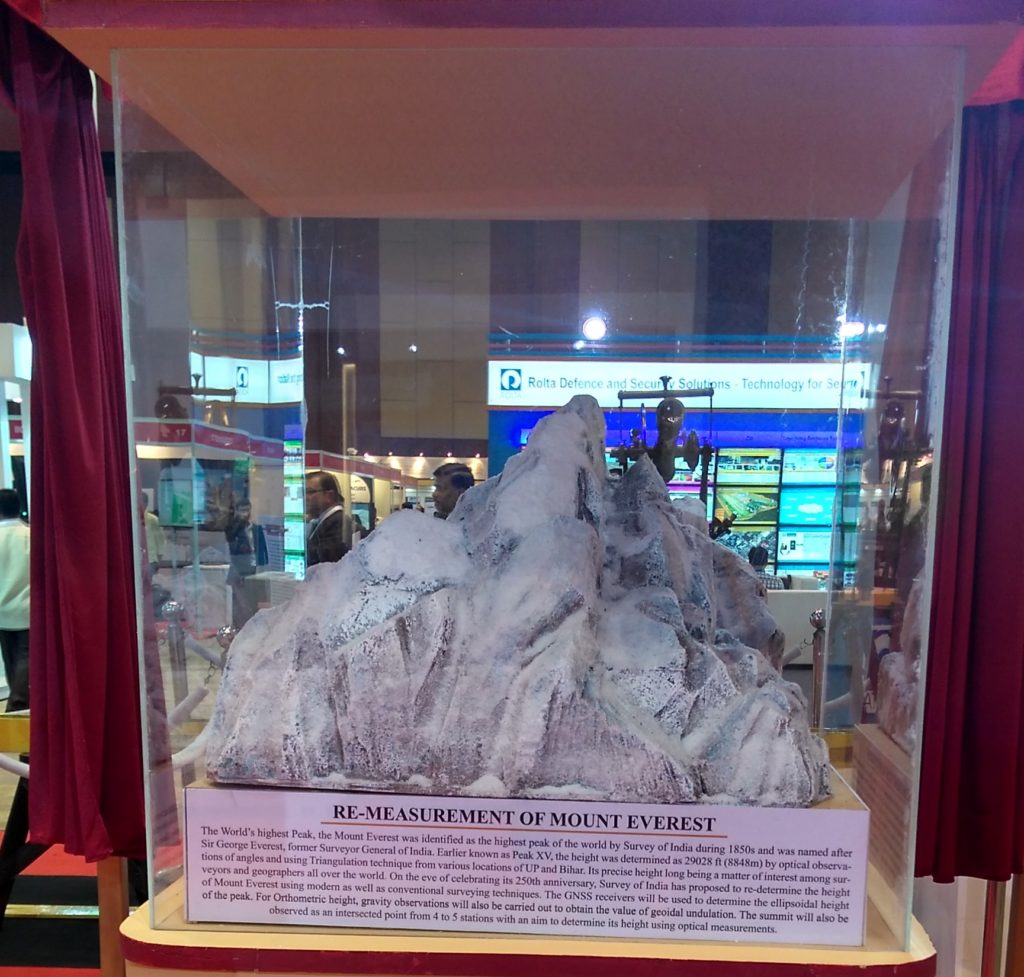 In the midst of all the techie-talking sessions a quick visit on the exhibitions had many intriguing information to be delivered. The first exhibitor to attract was SOI, celebrating 250 years of its establishment which read ‘Survey of India to re-measure Mount Everest’. SOI also had a gigantic theodolite dating back to 1850’s and many other old instruments most of which I have read in my academics. Moving from SOI after figuring out what the old instruments were used for and to the Bhuvan, ESRI and Leica I was able to realize the vast advancements in the field of geo-spatial industry, the development was quite clear and evident. It was certainly a true exhibition to look at the new software and hardware products by various leading as well as emerging geo-spatial companies.

Networking with the the industry! 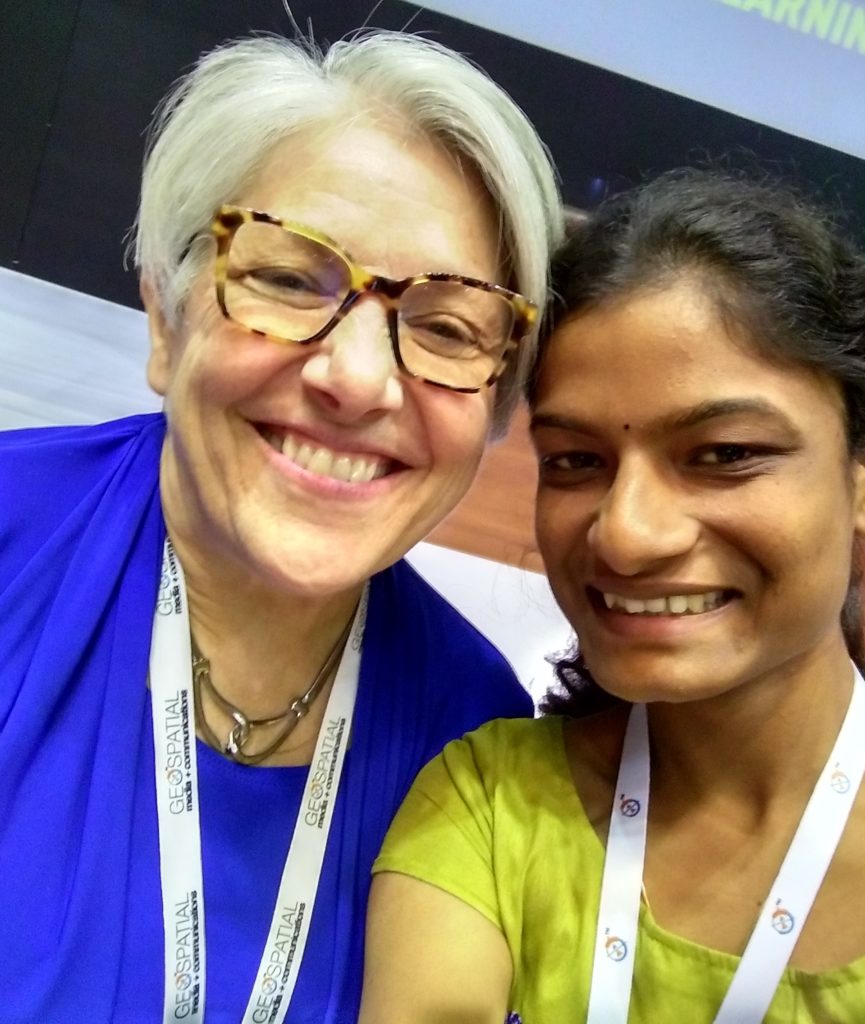 Networking was one important offer that I received from GWF 2017. Meeting Team Indus, tete-a-tete with Marc Melviez, sharing a selfie with Barbara Ryan, Secretariat, GEO, a networking lunch with Steven Ramange, Senior External Relations Manager, GEO and meeting professional from different dimensions say professors, engineers from government and private sectors, etc., The contacts that I have gained through GWF 2017 is immense. The Hall of Fame presented by GWF 2017 was a source of motivation and inspiration. Quoting few words from Sanjay’s message ‘These stories would offer inspiration and encouragement to next generation in pursing their quest’ surely it is. Barbara Ryan, my personal inspiration right from the time I saw the speakers list is the only women amongst the 10 Hall of Fame legends with whom I have managed to get an autograph and a selfie on her birthday. Something that bothered me throughout the conference was the presence and participation of women and students (me being both) which I think, has to be addressed in the future.

On the whole GWF 2017 has changed my perspective about the geo-spatial industry providing rich geo-spatial concepts for my academics and more network for career excellence. As I personally told Sanjay that I, as a student will have more to take back from GWF 2017 than other attendees. Looking forward for GWF 2018, for more learning and sharing!

Maps of fantasy worlds are always inspiring. It’s amazing how human creativity can abstract fictional geographies. That’s why when I came across the works of a Burbank, CA-based artist named Arlin Ortiz I knew I had to feature them on Geoawesomeness.

Arlin has been working on a project called Any Which Way: An Adventurer’s Atlas which comprises a set of amazing fantasy maps. His adventure with mapping started out with drawing them to use in tabletop role-playing games. Arlin enjoyed the world building that comes along with creating fantasy geographies. He liked to imagine the adventures and stories that could be told in each location.

His inspiration comes from medieval era maps, that strike an interesting balance between accuracy and expression. Arlin tries to create a similar sense of abstracted scale and detail. Like in medieval ages the maps give a feel like they have been created without absolute knowledge of the land that gives it a bit of mystery.

If you like Arlin’s maps you can support his project via Patreon or simply buys a print in his INPRNT store.

Take a look at these maps: 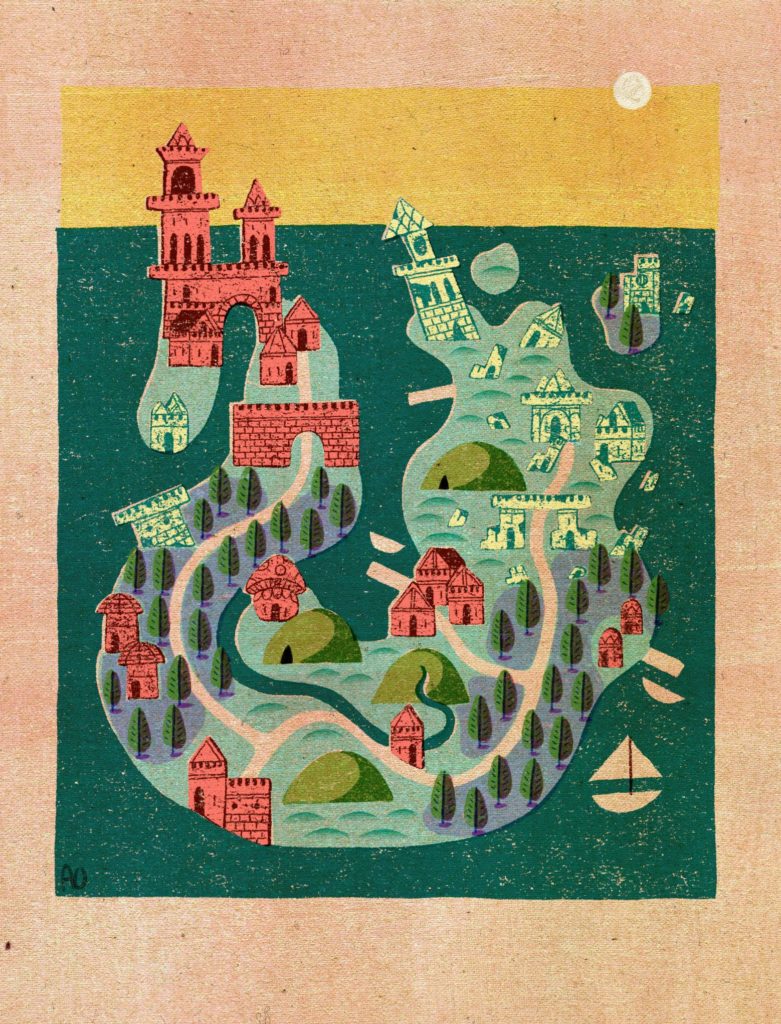 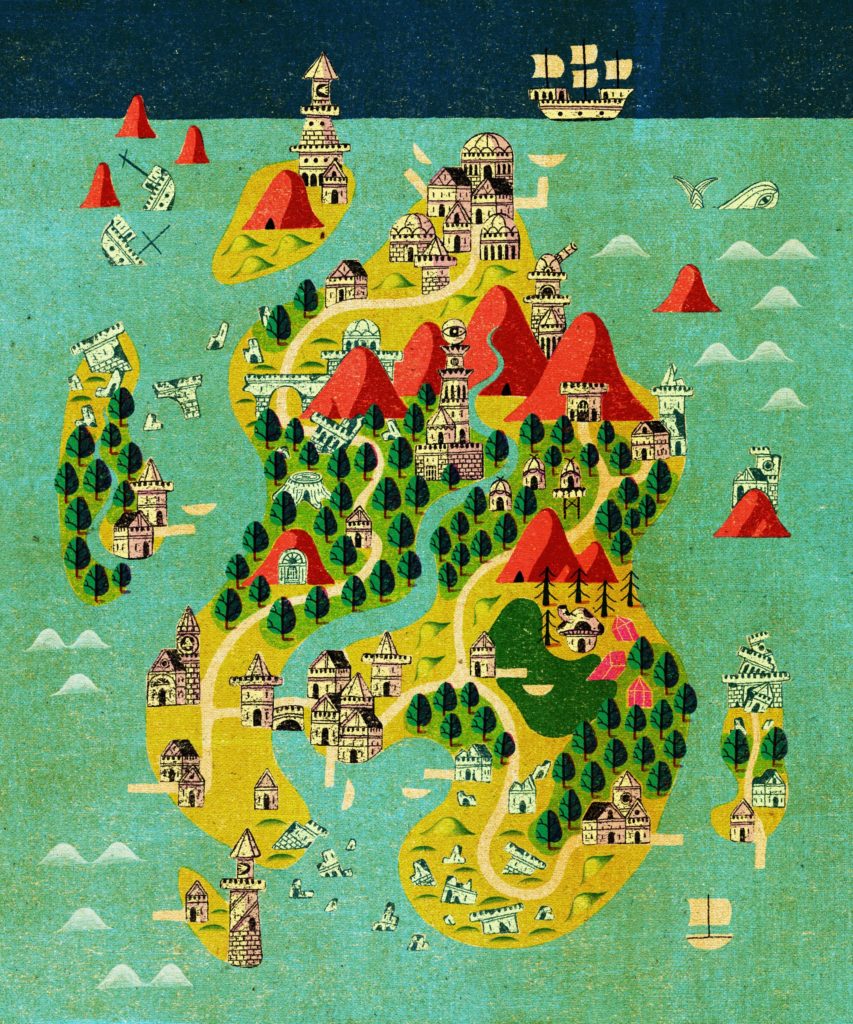 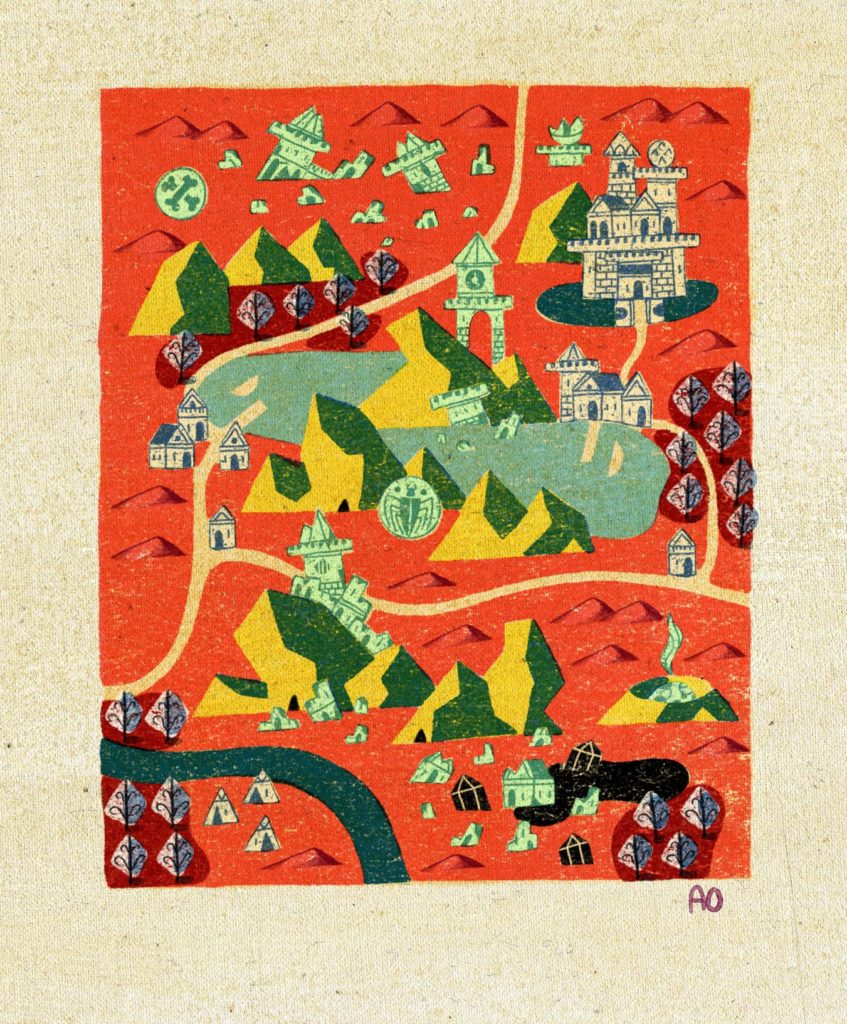 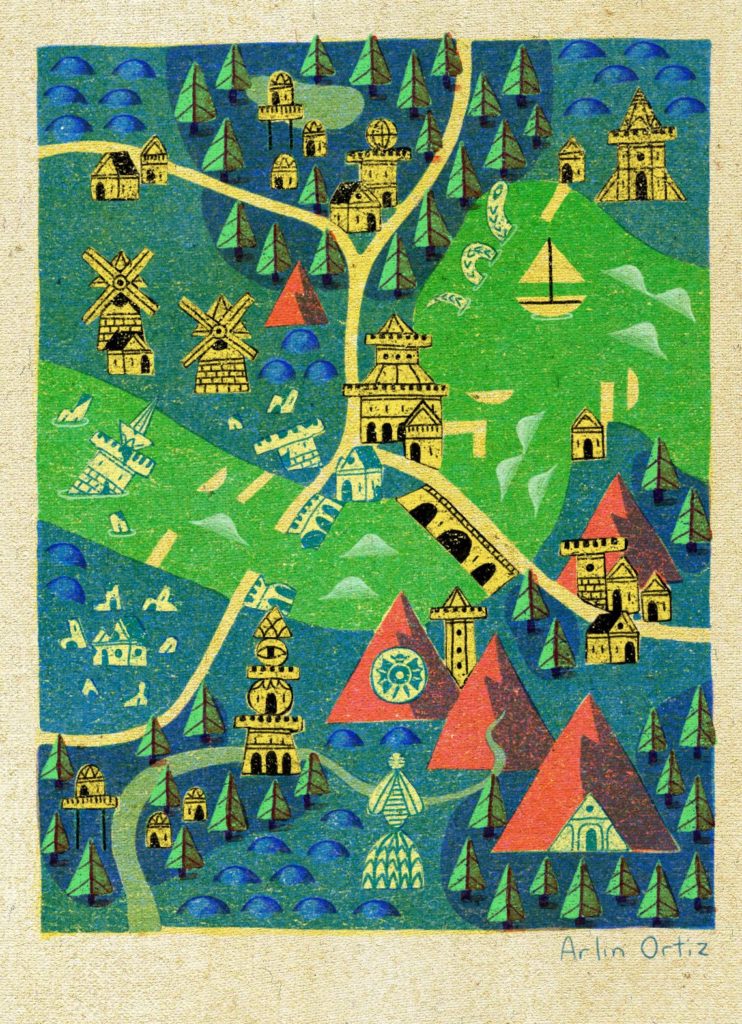 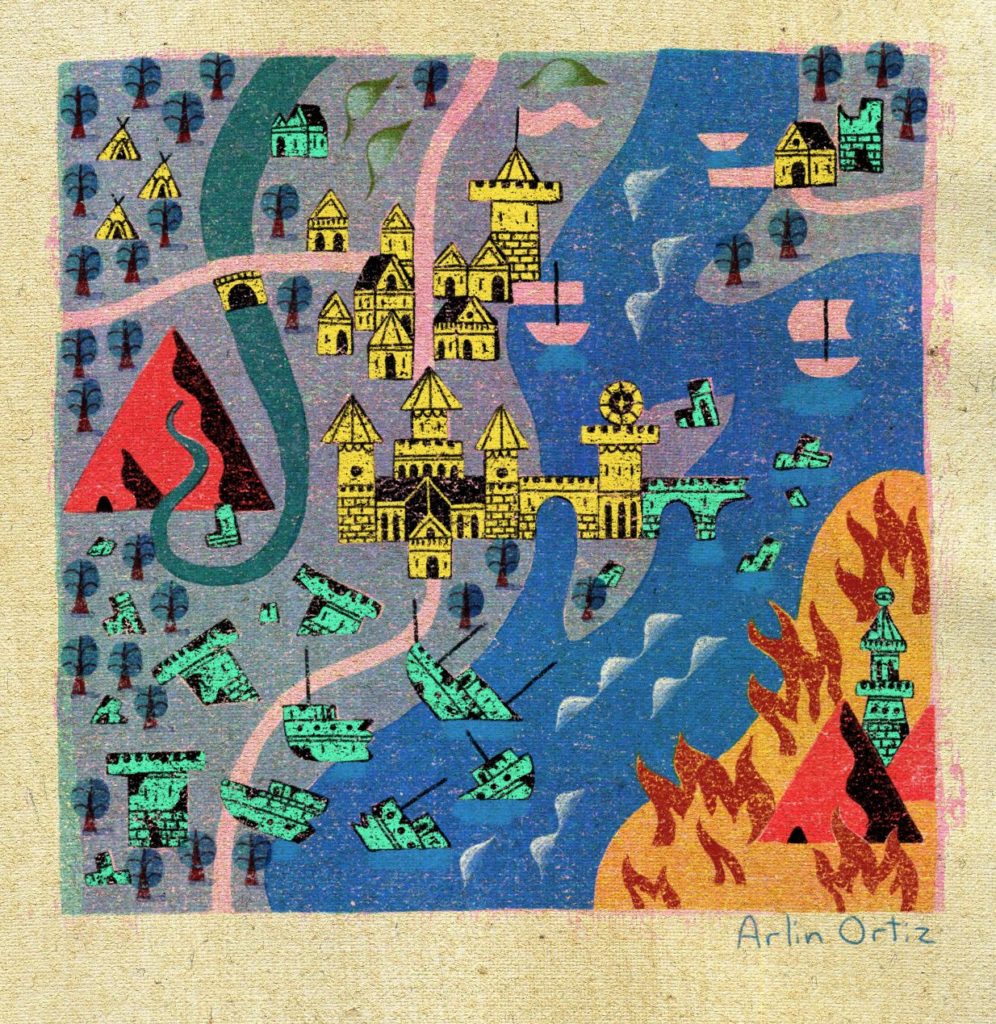 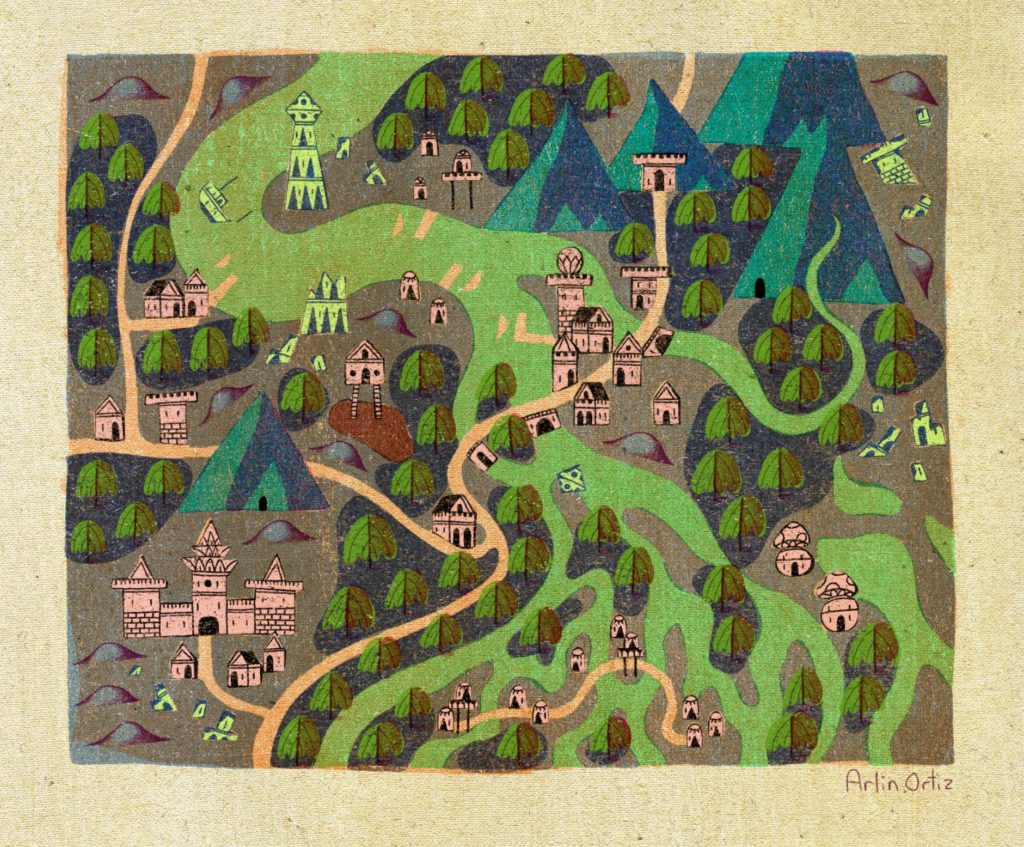 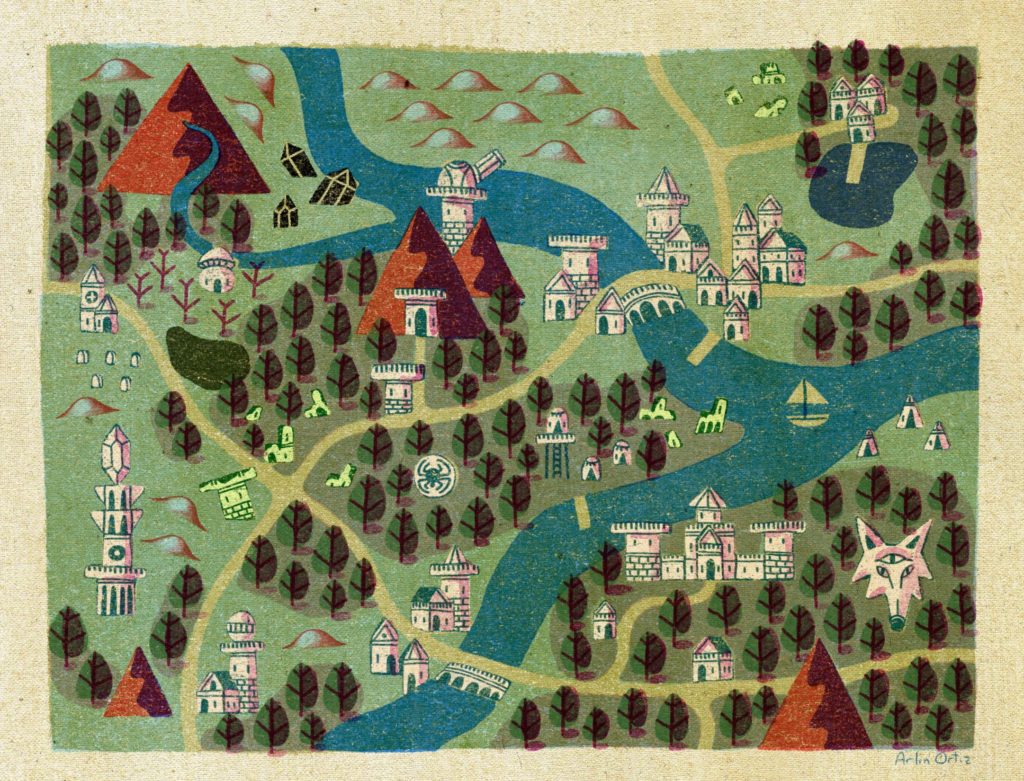 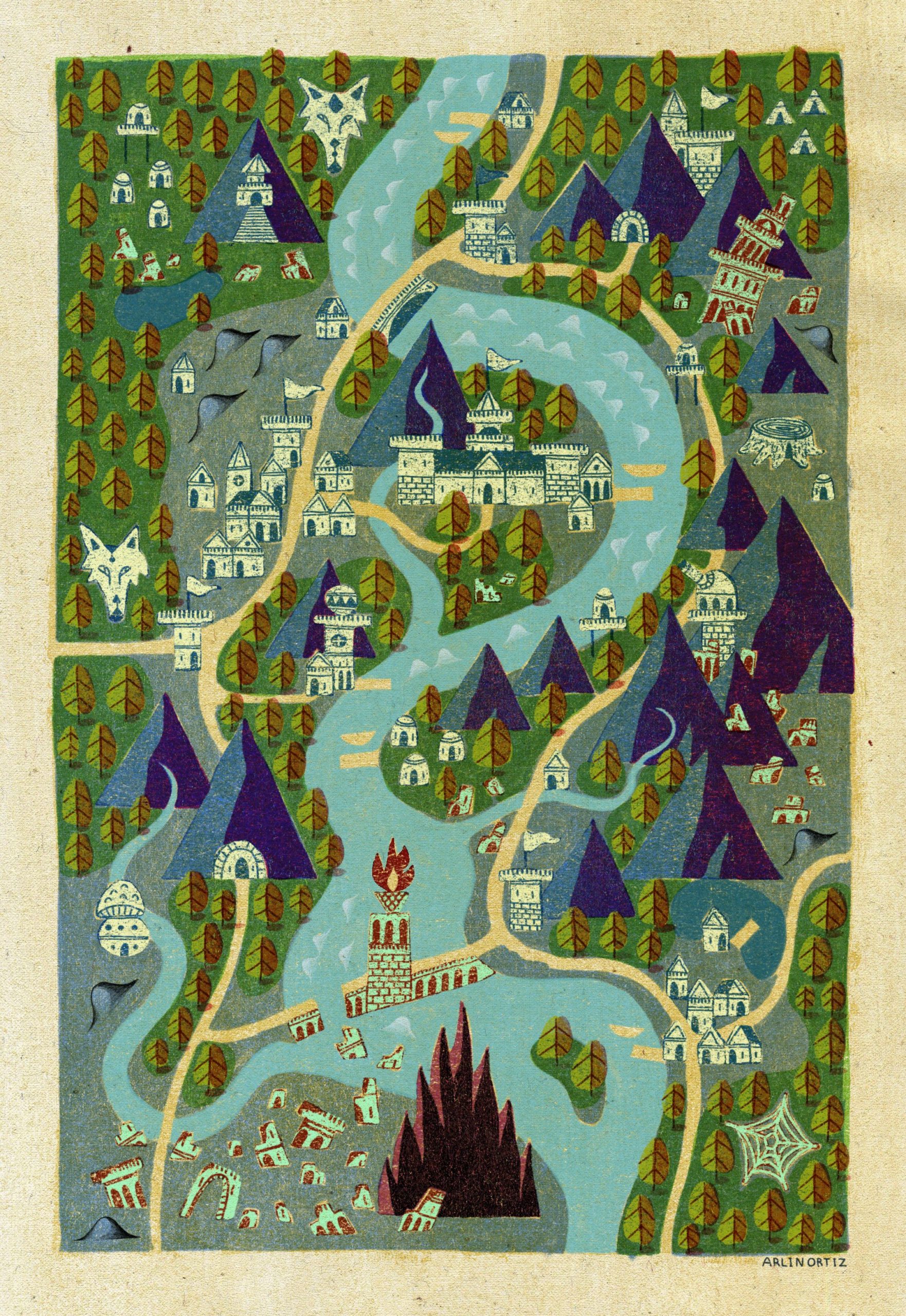 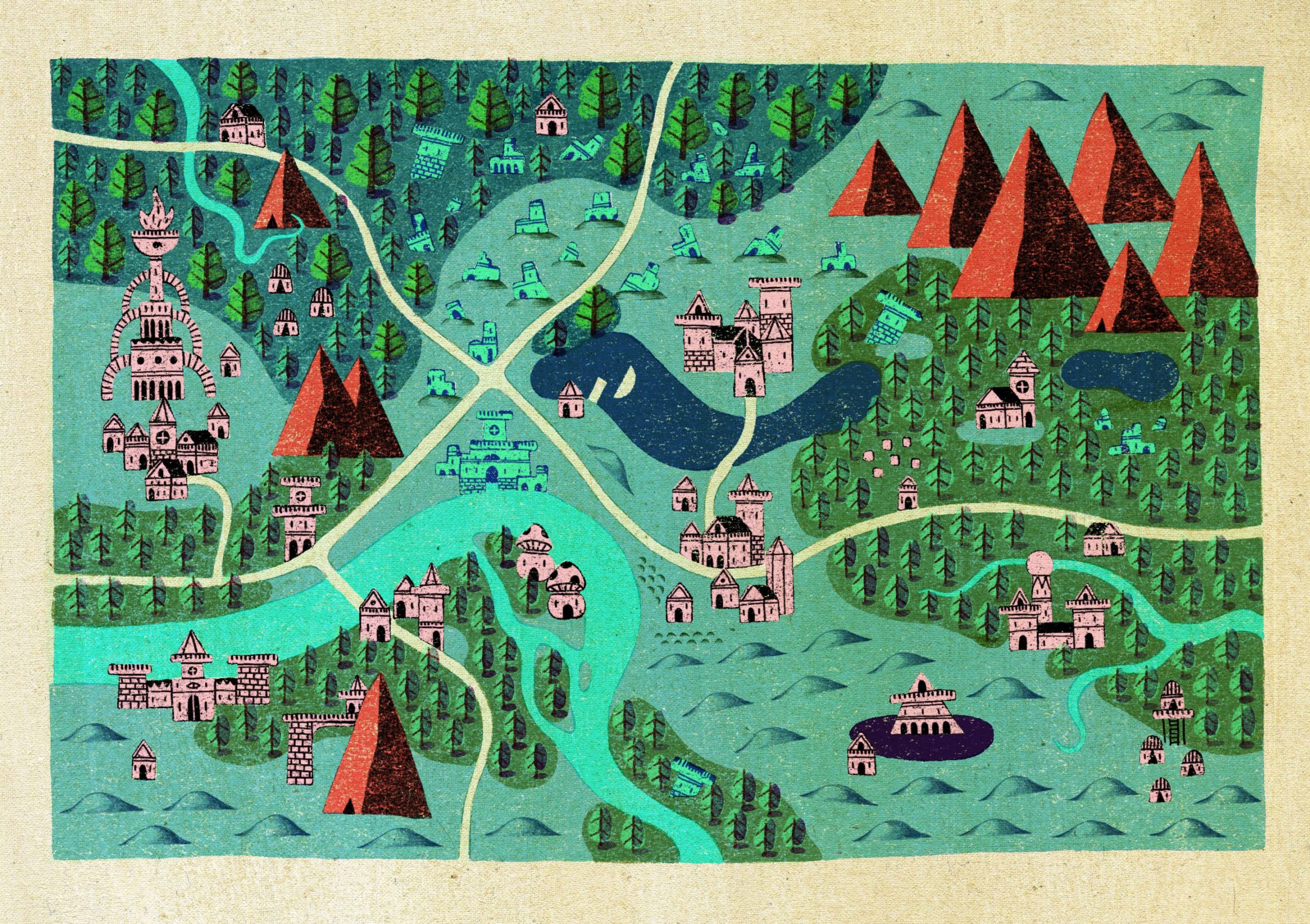