Looking for more positions in GIS, academia, or design, or even remote roles? Go directly to our searchable Geospatial Job Portal!

Do you want to use your knowledge of ArcGIS Enterprise to help organizations to be successful? In this position, you will provide technical GIS support and training services to our clients, delivering an outstanding user experience, consistent with our client experience vision. Want to know more? Click here.

Are there any specific things you’d like to see in our job portal? Feel free to get in touch. Be sure to follow us on LinkedIn as well!

The evolution of indoor navigation technologies 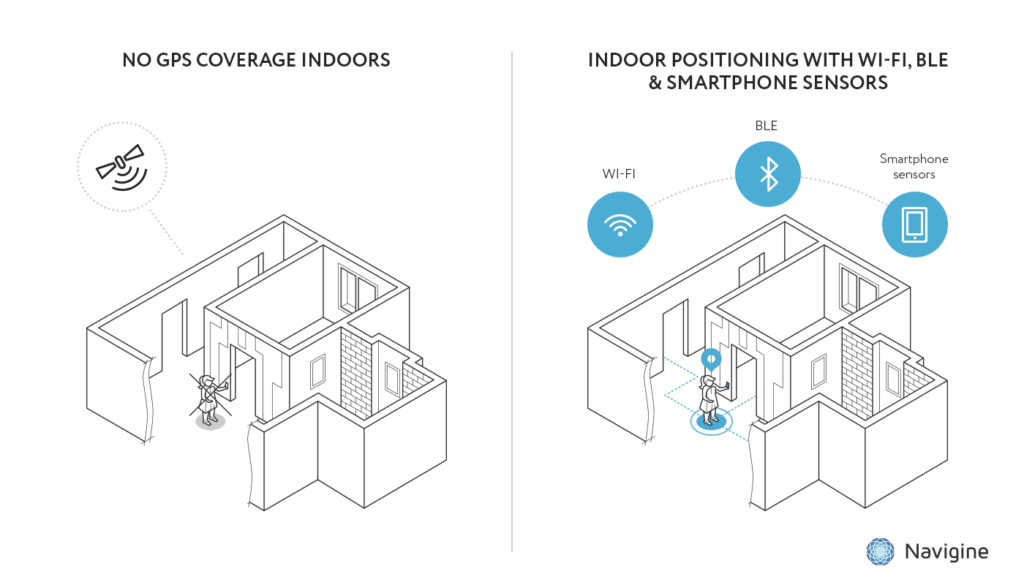 All big companies such as manufacturers, retailers, and commercial property owners have looked for sophisticated indoor positioning technology for recent decades. They were focusing on business and internal logistic optimization, visitors’ routes monitoring and tracking of vehicles. What technologies were used in indoor navigation and which one turned to be the best?

We got used to navigation apps. Nowadays they are able to identify the most convenient route from A to B between two districts, cities or even continents. All our positioning apps are based on the satellite’s signal. A satellite works like a gigantic eye, which sees each of us from the space. Despite their efficiency in outdoor navigation, GPS, Glonass or Galileo systems did not cope with indoor positioning. Because satellite navigation requires clear line of sight to perform well.

A positioning in cellular networks became the first alternative to GPS. This approach assigns your position to the “cell” of the nearest station. The most significant drawback of such method was low number of cell towers. Even now the average error of indoor positioning via cellular network remains too high – up to 100 meters. Such figures do not work for indoor navigation. The maximum error has to be 3-4 meters. 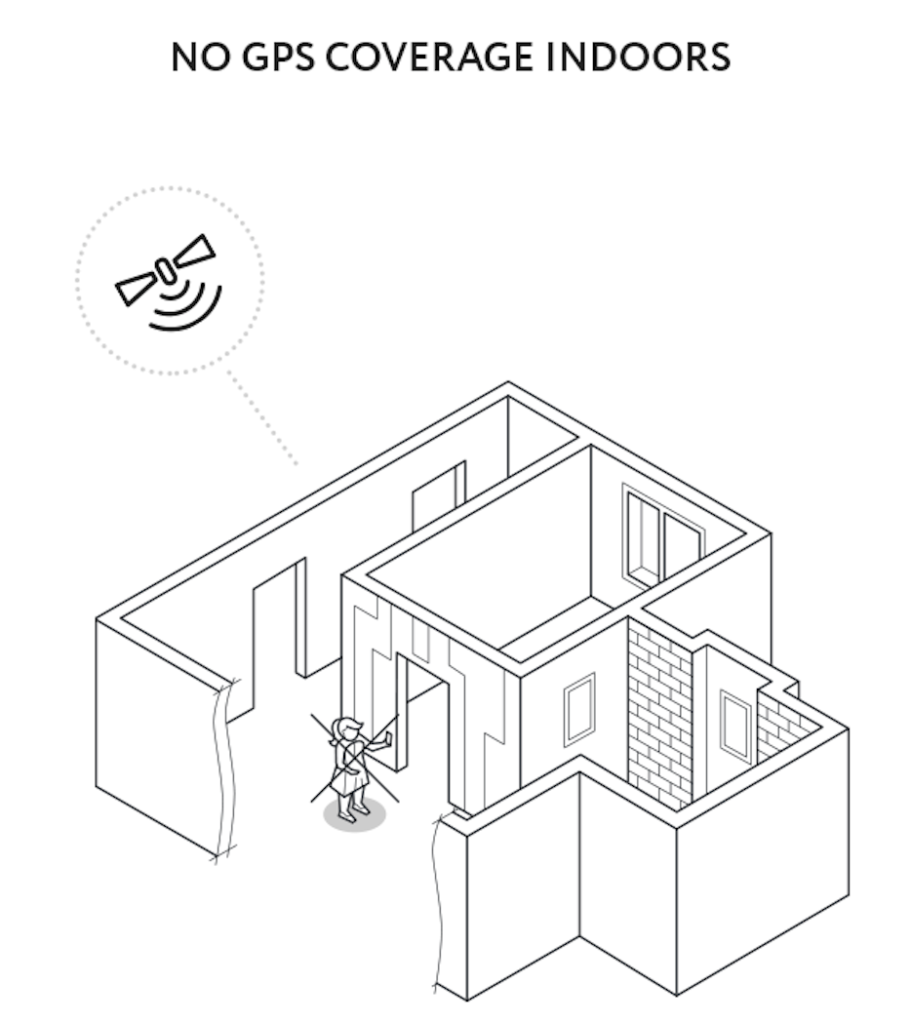 The new generation of technologies

There are three groups of cutting-edge technologies for indoor navigation right now. The first one involves different wearable inertial devices. Usually, they determine the displacement of an object from its starting point. But if you don’t know the starting point, you can’t identify the final position and the route itself.

The second group of technologies are joint with visual odometry. Such hi-tech solutions provide an opportunity to reconstruct the person’s or object’s trajectory via video camera. Although these systems could ensure high accuracy of positioning in good conditions, they are too dependent on outer distortions like lighting.

Moreover, such solutions require fixed points in space such as walls, furniture, doors or other objects. If you walk in a huge open space, visual systems will fail to determine your path. Additionally, such video solutions always have problems with identification objects of movements. Does a person move or does he move a camera?

The third cluster of indoor navigation solutions includes technology which is based on various signals such as Wi-Fi, Bluetooth or UWB. How do they work? We all know that the nearer you are to a Wi-Fi-router the better a signal is. So, we have an opportunity to create a special model of signal penetration (and fading) and compare the real signal from a particular smartphone to such computer simulation. Combining the data from 3-4 routers we identify accurate coordinates and trajectory of a moving object.

UWB-systems don’t measure the power of the signal. Such solutions identify the distance between an object and a signal’s origin. However, they are able to work only in open spaces and can’t overcome barriers like walls.

Bluetooth, Wi-Fi, UWB: what to choose? 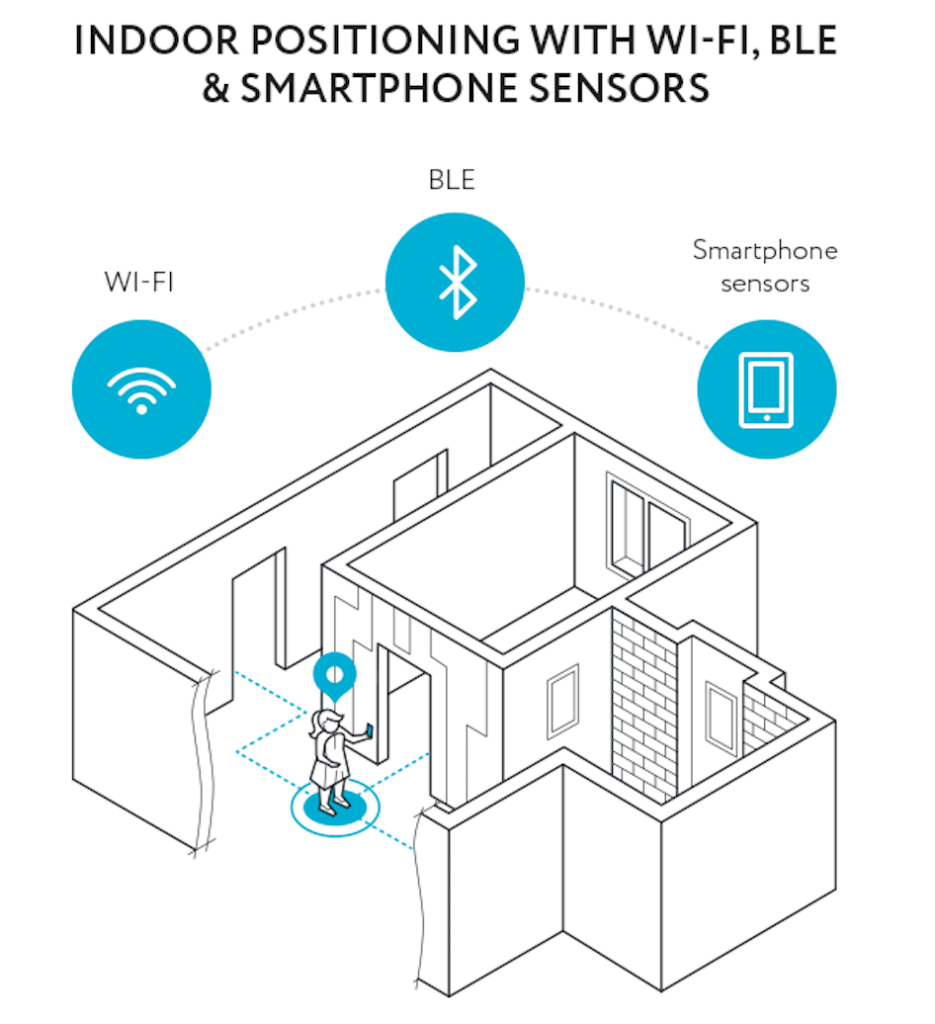 The final choice between three types of technologies depends on price and energy consumption. Bluetooth is considered as the most cost-effective technology. Wi-Fi takes second place and UWB is the most expensive one. The latter takes maximum energy consumption as well. For instance, a smartphone could work 1-2 day without charging, while Bluetooth or Wi-Fi scanning. The UWB shortens this working time to 5-6 hours. Sometimes, energy consumption plays a crucial role. Mine is an example. Mineworkers spend 8 hours underground daily, that is why UWB technology does not work for them.

Despite high price and big energy consumption UWB systems ensure the most accurate positioning. Each company has to choose between costs and final accuracy. All three technologies (Bluetooth, Wi-Fi, UWB) are presented on the market and are used by different companies. 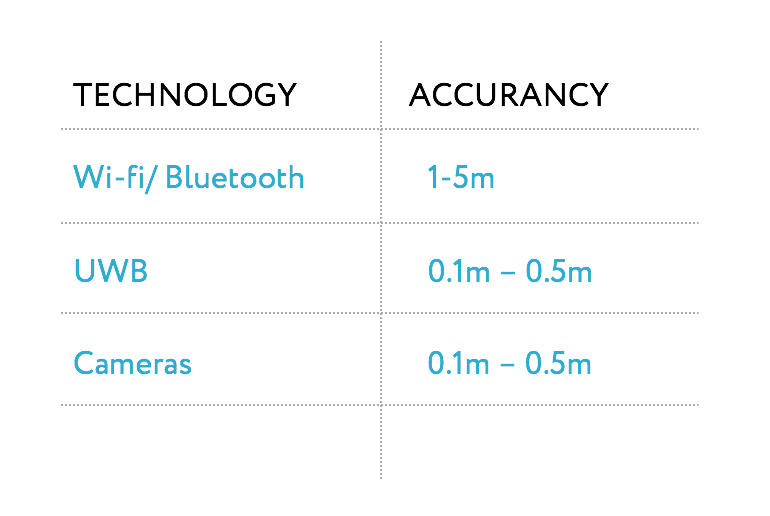 A future of indoor navigation

It is obvious that some technologies will be substituted. The next step of evolution is the replacement of the signal’s power measurement to distance measurement. The new generation of smartphones are able to connect to some Wi-Fi spots simultaneously. The second important innovation is an opportunity to measure the direction of in put and out put signal. The manufacturers of Bluetooth equipment have already announced the upcoming updating.