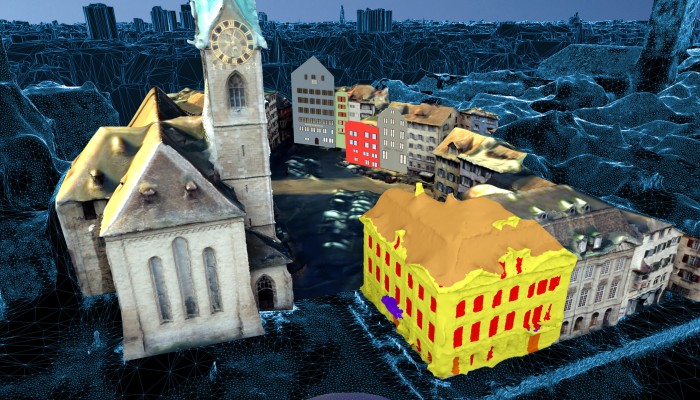 You know the millions of pictures you take on vacations and flood the Internet with? The ones that after a while become nostalgia triggers, only to resurface annually in Facebook’s ‘On this Day’ posts? Well, researchers at Swiss Federal Institute of Technology (ETH), Zurich, have found a pretty cool use for them.

They have developed a computer vision platform called VarCity which can create 3D models of cities using imagery data alone. This data is being fueled by geotagged public images found on photo-sharing sites and social media networks. It also uses video material from YouTube, public surveillance cameras, and mobile mapping.

The project, which took 5 years in the making, leverages machine learning algorithms to differentiate between different components of a city, such as, buildings, roads, vegetation and water bodies. The shapes of the buildings can be analyzed to identify their architectural uniqueness. The key points across all images are tracked to extract the 3D geometry of an area. These points are then used to create street-level point clouds through multi-view stereo techniques.

Now, this reminded us of Mapillary, a service for crowdsourcing map photos. Mapillary improves positioning quality by computing the relative camera positions and a 3D reconstruction of the environment based on images of the same area. A side effect this process allows Mapillary to generate 3D point cloud models based on images.

What differentiates VarCity is its automatic analysis of the dynamics within the city, such as, traffic. For example, the technology can study car trajectories over time and store car density statistics for each one of them. Such an analysis of traffic data allows VarCity to fuel applications like real-time parking monitoring solutions. That’s not all. The applications of VarCity are aplenty. The automatic detection of landmarks through 3D shape analysis can be used by cities to optimize routes for architecture enthusiasts. It can also be used to build voice-guided navigation systems or to determine how much sunlight a building receives.

Talk about pushing the boundaries of crowdsourced photogrammetry, the ‘lite’ version style!

The World is infected by war at the cost of happiness

A small comparison between world happiness ranking and the conflict areas of the world revealed a new dimension for happiness. Blurring the economic, health, freedom, charity factors from the picture and focusing on the war/conflict affected areas, proves to be yet another negatively correlated reason for happiness.

The world happiness ranking was sourced from ESRI’s Story Map contest with more details on the contributing factors for happiness such as Income, Governance etc., whereas the conflict-affected area was fetched from the IRIN’s in-depth coverage of World at War with a greater degree of detail on every war-torn region. Both of which are interactive maps, a must check for more understanding.

A comparison on Ukraine

The war affected Ukraine stands at a happiness ranking of 132 which is lesser than the surrounding nations which are in the range of 40-80.

It is clear from the war interactive map that Africa has always been a victim of terrorism which pushes the African countries far behind every other nation in the happiness ranking indicated by red color rank numbers. Africa also holds the least ranking (155) country.

A study by University of Canterbury also reveals that the amount of media glare on the regions affected by war influences the happiness level which can be correlated with the Middle East and African country’s dip in the happiness ranking compared to other war affected areas.

A much happier Europe and USA

The first world countries are placed on top of the happiness ranking indicated by blue colour with minimal or no conflicts at all.

These comparisons clearly reflect how war can influence happiness and proves to be considered as one of the important factor for happiness. Let’s stop fighting and start smiling!