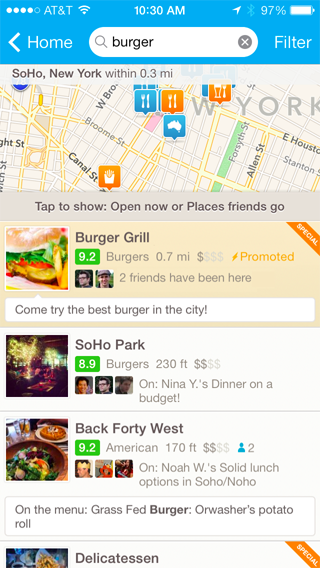 This week Foursquare announced another huge step forward to monetize it’s location-based business. Last year, the start-up which employs around 160 people had just $2 mln revenues… 160 people x $100k (let’s say average salary) = $16m… just for wages. Dennis Crowley – CEO and founder of 4sq realized long time ago that by just having 35m user community you will not make money and over last two years he’s been changing the company from simple check-in service to local discovery, big data and location-based advertising company. After trials earlier this year with Adwords-like ads and campaigns for several small businesses in NY Foursquare finally rolled out a self-service advertising platform.

It actually seems to be super simple.  All you need to do is go to foursquare.com/ads and build ad by uploading photo and text, possibly but not necessarily a special offer.  Then you set your monthly budget and push ad live for people nearby to see. You can than monitor how many people have viewed the ad, how many have tapped on it, and how many actually came into your store. 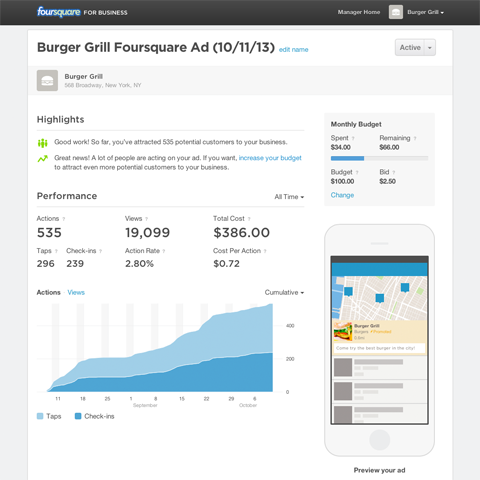 So what’s the value in here?

Actually small business owners don’t have many options to choose from to easily run a mobile advertising campaign which would drive foot-traffic to their location. Location-based targeting is available in ad networks of Google, Facebook, Yelp and Groupon… but Foursquare is different and you use it in different way. As a coffee shop owner I would like to have tangible and quick results. Moreover I don’t what people to visit my website or Facebook profile I just what them to come to my venue and order something, and this might be one of the first large-scale possibilities for merchants to know how their investment in ads influence real foot-traffic at their location.

Actually the platform seems to be very simplified. I would like to have a little bit more targeting options to choose from… if I were you I would test it as you might be already spending some money on mobile advertising but probably there is still long way to go in order to make it the best location-based marketing tool out-there.

Have you ever wanted to experiment with maps by tweaking and fine-tuning the Geographic coordinate system? To play with mathematical cartography and check what will happen? Have you ever wanted to design your own world map with whatever themes, colours and symbology that you are interested in, without using any traditional GIS desktop product? Have you ever looked for a web resource where you can explore your cartographical skills and understand all GIS projection systems which are available in GIS realm? 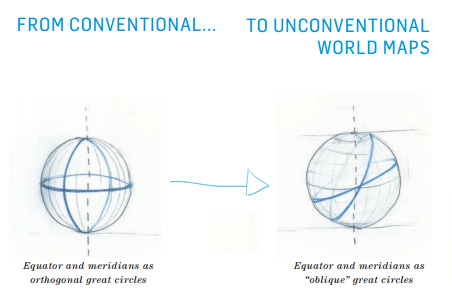 Yes? Than your dreams had just came true;). I introduce you to World Map Generator project which can generate unconventional maps of the world and can be saved to disk that do justice to the thematic context in which they appear, in an exploitive process to bring forth the desired effects in world maps. The project had been developed by two Swiss universities: Brene University of Applied Sciences (BFH) and Berne University of the Arts (HKB) and it’s based on customer made software that allows to play with cartography the way you have never experienced before.

A cartographer may look forward to generate a world map with varying perspectives, alternative angles and shifts in point of view. A journalist may interest in preparing an editorial column with a nice world map or any region with proper red lines and annotations. All these end-user requirements are categorized into nine protagonists in three different thematic areas.

Below three maps were generated with different thematic areas using this project software. 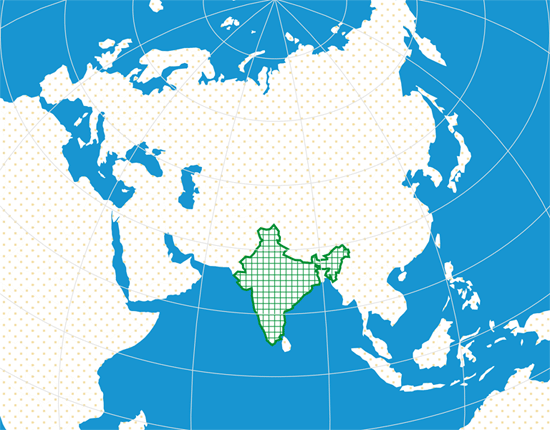 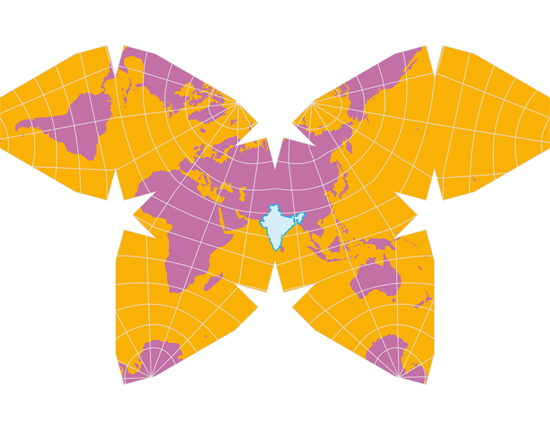 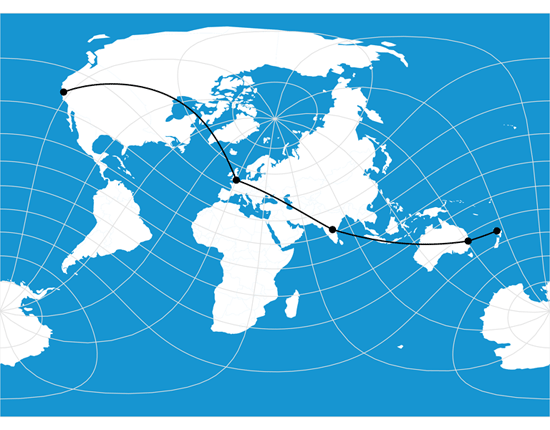 The “Viewpoints” software is conceived such that its unconventional world maps may serve a broad range of concrete applications. This is achieved by a structure of three overarching thematic areas, each featuring three design “protagonists”. Each area comes with its own specific applications, software functions, target audiences and envisaged benefits.

For the many years, GIS is also been used for story telling with an unconventional map embedded with proper annotations. If so is what you are looking for, you may definitely want to explore this software. I believe, such kind of projects will surely increases awareness and interest in GIS and cartographical skills which intern petrified our zeal about GIS.

Thanks to the team who is behind the smart work!!! For more details about this project website.

On the other hand, a GIS developer may explore and leverage WebGIS API such as http://d3js.org/ and http://kartograph.org/ which were used to develop this project software.