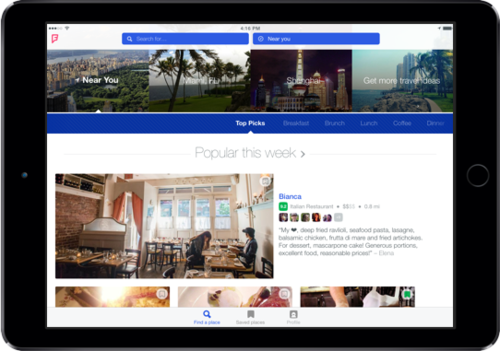 Seven months after reintroducing itself and separating into two apps, Foursquare is launching its dedicated iPad app. The iPad app is a lot like the newly redesigned Foursquare iPhone app but there are some new features which utilizes large screen of a tablet.  The update adds a new section that displays recommendations of the top-rated venues in your neighborhood. The recommendations are broken down into “newly popular, up-and-coming, and local mainstays. It also adds features to help users plan trips outside of their city or neighborhood.

Foursquare made a risky move to compete with Yelp as a local discovery tool rather than being a check-in app to see what your friends are doing at the moment. Many users complain about the change. Personally I don’t use Swarm (for check-ins) and I used to be a heavy Foursquare user, on the other hand Foursquare is now my major local discovery app. I’m not sure how the change worked on other users but Foursquare is unclear about it.

#Business #Featured #GeoDev #Ideas
Death by pushpins – Location data and user experience
Muthukumar Kumar 04.18.2022
AWESOME 0
#Business
What is the metaverse and why should geospatial enthusiasts care about it?
Sowmya Somanchi 06.29.2022
AWESOME 5
#Business
We have analyzed 568 geospatial startups around the world. Here are the conclusions about the market
Hassan Safieddine 05.21.2022
AWESOME 11

This map reveals the directions of America’s rivers

Do you remember a visualization of city street grids color-coded by orientation? The effect was stunning. Andrew Hill, a biologist and cartographer at CartoDB, used a similar methodology to make map of orientation of America’s rivers. The map clearly shows the topography of the U.S. highlighting the biggest mountain ranges but also slopes with are usually not visible on a map. The map uses vector watershed data which you can download here. Check out the map. It’s really beautiful.