Flying drones in India? Here’s all that you need to know

For all the Drone enthusiast out there in India, get to know the legal stuff for flying drones in India, before your enthusiasm goes overboard ending up serving terms in jail. Sounds a bit horrifying isn’t it? Yes, there has been instances of drone pilots being jailed, for flying drones without seeking the appropriate permission from authorities. However, proper permission obtained from authorities prior to flying can save you from all legal headaches. Here we have silhouetted the legalities of flying drone in India right from the purchasing stage.

Drones, how do you define it legally in India?

As per the definition given by DGCA (Director General of Civil Aviation) for Unmanned Aircrafts (UAs), “the UAS consists of an Unmanned Aircraft (UA), a Remote Pilot Station (RPS), Command and Control (C2) Link, the maintenance system and the operating personnel. Unmanned aircraft are either pilotless or do not carry pilot(s) on board. Remotely Piloted Aircraft (RPA), Autonomous Aircraft and Model Aircraft are various types of unmanned aircraft”, which is essentially what we call as drones.

How to buy a drone in India?

Although flying of drones without permission is illegal in India, selling is not. Drones are easily available at online platforms at a very low price. An impressive figure tells India is the highest seller of drones in the world. There is no settled law which regulates the selling of drones at an online platform in spite of the fact that flying one is prohibited!

That being said, purchasing a drone somewhere abroad and bringing it to India as import of drones is prohibited in India. As per Section 80 of the Customs Act, 1962, goods which are prohibited can be detained. According to section 2(33) of the Customs Act, 1962, “Prohibited goods” means any goods the import or export of which is subject to any prohibition under this Act or any other law for the time being in force.

Legalities of flying a drone in India 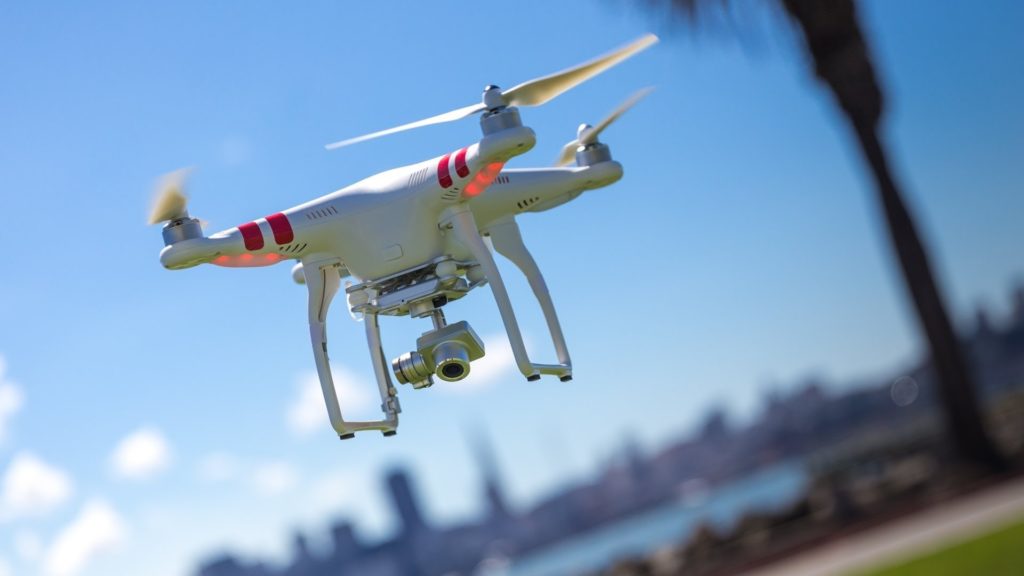 Flying of drones without prior approval from the governmental authorities is illegal in India. By the public notice issued on 7.10.2014, the DGCA (Director General of Civil Aviation) has prohibited the launch of any UAV (Unmanned Aerial Vehicle) by any non-governmental agency or any individual.

Further, Press Note No. 3 (2014) released by the Department of Industry Policy & Promotion, Ministry of Commerce and Industry laid down a list of electronic aerospace and defence equipment which required an industrial license for manufacturing/production. This includes UAVs or commonly referred to as drones.

You may wonder why such strict restrictions are being placed on drones? Here is the reason stated by DGCA in the draft policy for operations of drones in 2016 “UA operations present problems to the regulator in terms of ensuring the safety of other users of airspace and persons on the ground. However, in view of technological advancements in UAs over the years and their increased civil applications, it has become necessary to develop guidance material to regulate this activity”. Usage of drones came under the scanner due to security concerns as officials pointed out that the vehicles can be used to carry out aerial attacks and pose a great threat if not regulated.

How to register UAS or drones in India?

The Aircraft Act 1934, places UAs under the broad definition of Aircraft. As per Rule 30 of the Aircraft Rules, 1937, the DGCA has the power to issue notices to Aircraft Owners, issue particular directions relating to the operation, use, possession, maintenance or navigation of aircraft flying in or over India or of aircraft registered in India. Here is the application for registering your drones and for clarifications you can seek the following guidelines.

The draft policy for operations of drones, released in April 2016 which is yet to become a reality, has framed a lot of guidelines, having in view the R&D and recreational scope of drones apart from being used for surveillance and commercial purposes.

1. Classification of the drones

The permission has to be taken regardless if the flying condition. However, Nano drones (weighing less than 250 grams) should be added as a separate category and exempted from registration as recognized by FAA.

For owning a drone you would need to get a unique identification number (UIN) from DGCA. For the registration, you would need to provide proof of address, a permit from the police and one from the telecommunication department. You will need to give the specifications of the drone to the authorities. After all the documents are cleared you have to install a fire-proof plate over the panel that has the UIN.

UIN can be granted only to Indian citizens. In terms of companies, it should be an Indian-based company or two-third of its directors are required to be citizens of India. However, a temporary UIN can be granted for non-residents of India for R&D, training, test flights and recreational purposes.

To obtain Unmanned Aircraft Operator Permit (UAOP) you will have to go through a set of procedures. The following documents have to be submitted to the authorities 90 days before flying.

The license will be valid for two years. So even if you want to own a small recreational drone just to fly in your house, you need to go through all this procedure. There is no clear guideline if there would be an online portal dedicated for the purpose. However, a 90 day prior approval might become problematic for projects planned without the licensing awareness.

The draft guidelines provide that the UAS shall not be sold or disposed of in any way to any person or firm without permission of DGCA. For security purposes, the owner can’t transfer the drone to someone else without taking prior permission of DGCA. So you can’t lend your drone to a friend who wants to experiment with it as his flying space might not be approved by the authorities.

Drones are generally objects which can be flown by anyone, even children. But according to the bill you need to be at least 18 to fly a drone. Apart from that, you need to take special ground training equivalent to that undertaken by aircrew of manned aircraft or a private pilot’s license holder.

The draft guidelines require that the UAOP holder shall maintain records of each UA flight and makes such records available to the DGCA on demand.

The draft guidelines mandate all UAOP holders to have insurance with the liability that they might incur for any damage to third parties resulting from the accident/incident.

In the event of any non-compliance, the draft guidelines only provide for cancellation or suspension of the UAOP.

The proposed norms, is sure to provide a relief to remove the ambiguity that pertained with the legalities of flying drones in India. However, it can be improvised to meet the international practices which will facilitate the drone based applications boom in the industrial sector.

The distress of flying drone illegally

For those chancers who wish to take up the risk of flying drones illegally will end up in IPC Sections 287 (negligent conduct with respect to machinery) and 336 (act endangering life or personal safety of others) and 188 (disobedience to order duly promulgated by public servant).

So there you go, now you have all the info you need to know before you head out to fly a drone in India 🙂

Say thanks for this article (0)
Vinithra Rajendran
19 posts
Want to be an author?
The community is supported by:

Remember that scene from Ridley Scott’s Prometheus (2012) where the crew used small, spherical drones to explore the subterranean network of tunnels on LV-223? It was one of the most amazing pieces of technology of that time, wasn’t it!?

If you are a fan of Alien film franchise, you have probably seen this cool, viral site for Weyland Industries, and are aware that the automated drones are called Spectagraphs – an antigravity device that 3D live-maps any foreign terrain, revolutionizing the pre-process of terraforming and developing new colonies (patented in 2063!).

Well, ESA astronaut Luca Parmitano recently had his Prometheus moment when he went to explore caverns in a historic fishing port of Sicily. He used a drone to map narrow areas that are too precarious for humans to reach. Albeit, this drone deliberately bumped into its surroundings to learn navigation in tight spaces and to build a map. 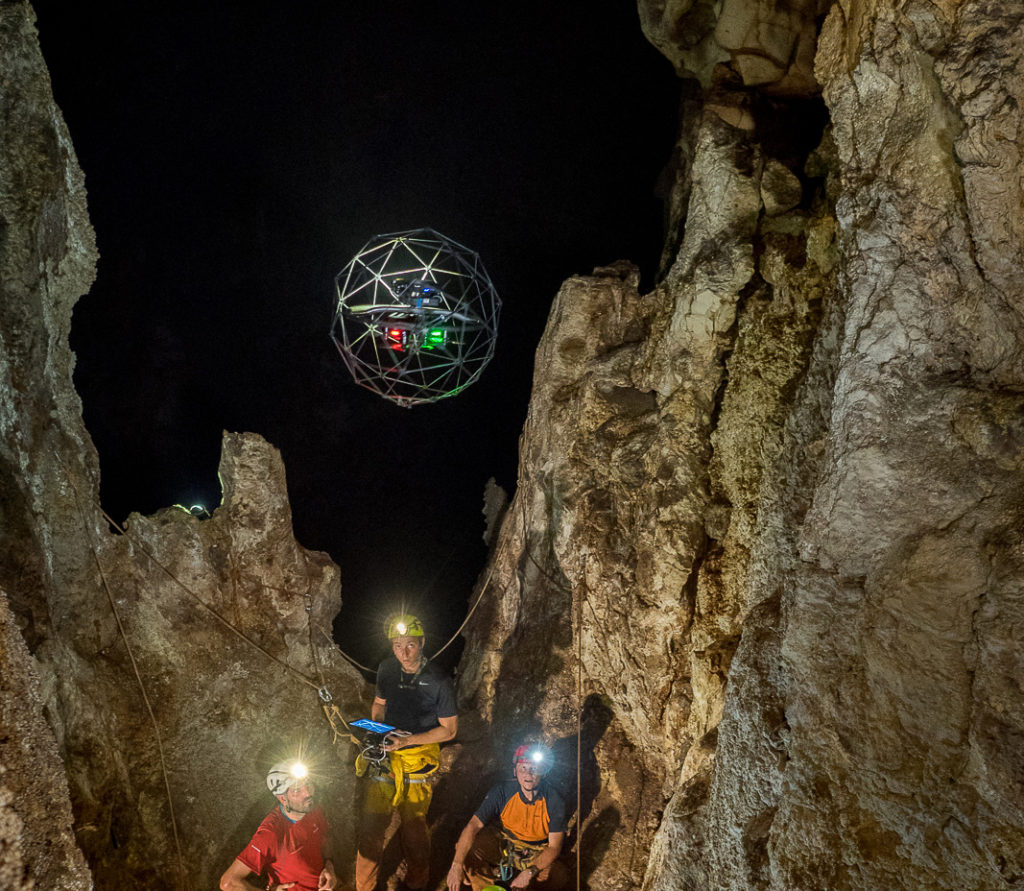 ESA devices cave exploration exercises for its astronauts because these parallel the exploration of outer space – working in tight spaces, no sunlight, and complete reliance on technology.

ESA’s course coordinator, Francesco Sauro, explained how this exercise might help in the future: “The drone used its thermal camera to map how the cave continued all the way to an unexplored area featuring water, impossible to reach for humans. These tests will help us understand which technologies can be used in the future exploration of lava tubes on Mars, for example.” Now that’s something even Ridley Scott would be proud of!