Rosetta’s signal after 957 days of sleep

After two-and-a-half years remaining in deep space hibernation ESA’s Operation Centre in Darmstadt, Germany, cheered the first contact with Rosetta spacecraft on 20 January 2014 at 19.17 local time. Rosetta’s signal came from 673 million km away from Earth, where the spacecraft from ESA will chase Comet 67P/Churyumov–Gerasimenko (planned in November this year) and will become the first mission to rendezvous with a comet, the first to land on a comet and the first to follow a comet around the Sun. Due to the large distance to Earth the radio waves needed around 45 min of travelling time until they were first received by a NASA station in California and directly forwarded to Darmstadt.
Rosetta already has done a long travel: after orbiting the Earth three times, it continued to Mars and circled the planet once, in order to fly to outer space passing the asteroid belt, where it observed the two asteroids Šteins (2008) and Lutetia (2010). In June 2011 the electricity onboard Rosetta was shut down in order to save energy, as solar panes at those distances deliver less electricity due to the fragile sunbeams. – The only devices left running were its computer and several heaters.
The mission is due to deliver information on the origin of our solar system as comets count as remainders from the time when the solar system originated. 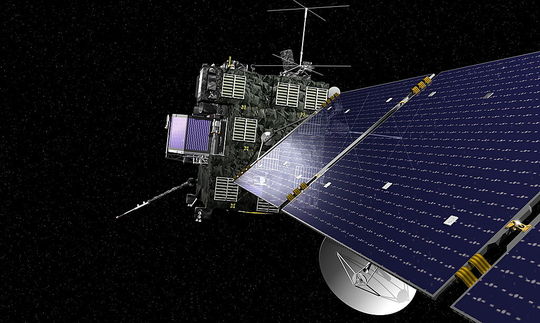 Venice’s subsidence was recognised already some decades ago, when the pumping of ground water from beneath the city combined with the compaction from centuries of building caused the city to settle. In succession, the extraction of groundwater was officially stopped banning further dropping of Venice as found in a study from the 2000s conducted by Yehuda Bock, a research geodesist with Scripps Institution of Oceanography at the University of California, San Diego.

However, the subsidence is on the tip of everyone’s tongue today primarily due to the increased number of inundations that nowadays afflict Venice each year. In 2013, a new study from the University of Miami aspired to reveal most recent deformation trends and used data between 2000 and 2010. The analysis combines GPS and InSAR methods and clearly captures the displacements over the last decade that neither GPS nor InSAR could do alone. Interferometric Synthetic Aperture Radar (InSAR) is able to gauge the changes of travel paths as a function of the satellite position and the time of acquisition. InSAR measures the backscattered phase signal over time, from emission to re-entering. If a point on the surface shifts, the distance of the same location to the sensor changes and so does the phase value. Phase differences taken from two scenes of the same area allow the detection of minimal land deformations as satellites are moving on a fixed orbit. InSAR is beneficial in showing changes on the earth’s surface around volcanoes and earthquake fault lines or above mining galleries. InSAR indicates the amount of transformation but not its direction and delivers elevation calculations relative to other points. GPS enables to take absolute measurements and in the portrayed study even showed that Venice and the surrounding lagoon is tilting, an information that the satellite images could not provide. 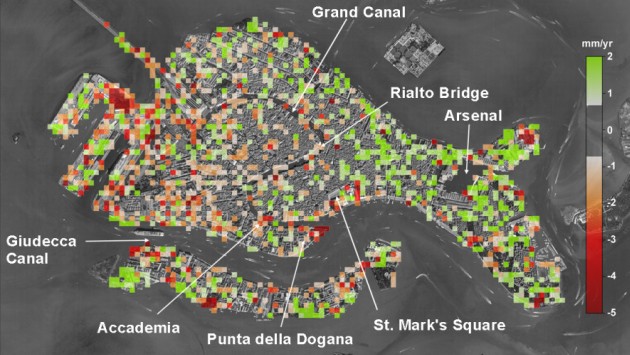 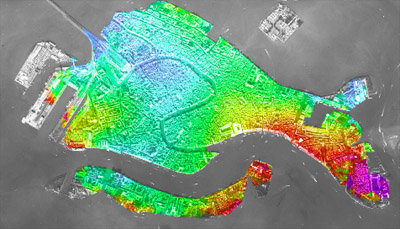 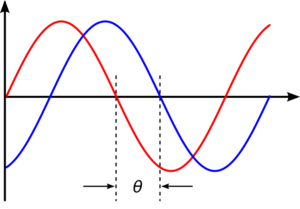 Phase difference of a radar signal due to a different distance fromthe sensor to the reflecting object. Source: Wikipedia

The reasons are of natural origin. Scientists mention the plate tectonic as a possible cause for the movements as the Adriatic plate that Venice stands on dips underneath the Apennine Mountains. Also, the compaction of sediments due to building still remains a factor.

Pietro Teatini from University of Paduva argues that the subsidence today is delicately less compared to times when ground water pumping was still practiced. Nevertheless, inundations in Venice are occurring more frequently today than before. Sea level rise is an indirect human influence causing those ‘wet’ periods in Venice. There is also a home made reason for the enhanced number of inundation produced by the digging of deep water channels into the lagoon for shipping. Originally, a system of oblong islands formed an almost continuous belt around the lagoon and protected the inner parts from floods that, spurred by heavy winter storms, steered towards the north Adriatic coast. Flooding also occurred in past epochs, but as the narrow access points into the lagoon obstructed the water from quickly entering, they happened less frequent. The natural obstacles were removed at least at three points allowing as a result big ships but also floods to enter the lagoon rapidly. 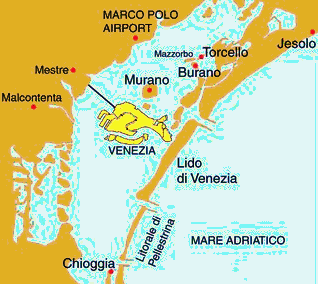 Site overview of Venice and the lagoon: the outer islands are artificially interrupted at three locations (until down to hte city of Chioggia). Source: bsn

In total, in the 20th century Venice subsided about 120 mm due to natural processes and groundwater extraction, in addition to a sea level rise of about 110 mm at the same time. Scientists calculated that the city and surrounding land could sink by about 80 mm relative to the sea in the next 20 years if the current rate holds steady.