The reflection of radar waves on the surface highly depends on the dielectric properties of the impacted objects. Among other things, the radar wave is reflected by water and objects containing water. Since the radar sensor is always inclined to the side, still water bodies reflect the wave off the sensor forwarding it in the according angle and same direction it came from. Therefore, still water bodies are areas with missing information on reflected waves. They appear as black areas and distinguish themselves from the displayed grey or white remaining land terrain. Hence, radar intensity images are highly eneficial for flood mapping.

Between January 9 and 11 2015 two winter storms passed over Denmark issuing flood warnings for different parts of the country. To map the extent of the flooding, the water management company DHI used radar intensity images from the German space borne satellite TerraSar-X. The advantage of radar images lies in their ability to be independent from weather and light conditions. It is possible to acquire radar images during the night and regardless of the current weather conditions such like heavy wind, massive cloud and rain. – Only heavy rain clouds will reflect radar waves at the X-band, which is used by TerraSar-X. The images were provided by Airbus Defence and Space, which has the commercial distribution of the images.

The image below shows flooded areas in Northern Jutland around Limfjorden, Denmark. The flooded areas are indicated by the light blue colour. Oceans appear as dark surfaces (as the waves are also reflected there), whereas the inland areas are displayed as grey or white surfaces. 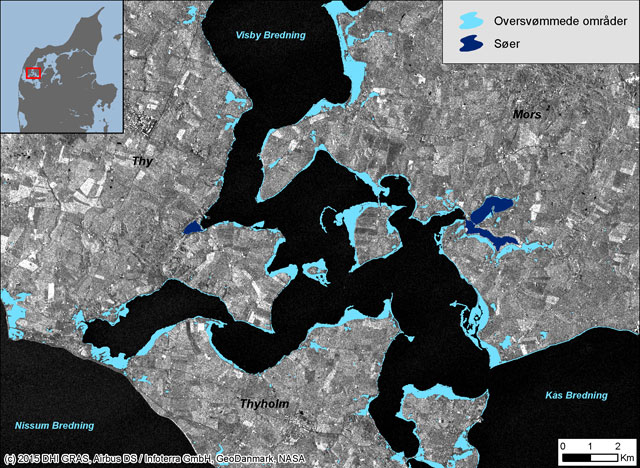 DSCOVR – Deep Space Climate ObserVatoRy satellite was successfully put into orbit by Falcon 9, a Space X rocket on Feb 11 at 6:03 PM. In another 110 days, the satellite will get to its own orbit, a million miles from Earth. 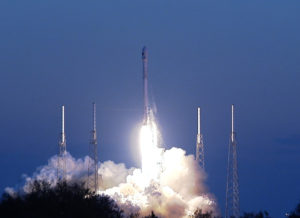 According to the media release from NOAA: “DSCOVR will be the nation’s first operational satellite in deep space, orbiting between Earth and the Sun at a point called the Lagrange point, or L1. It will take its place at L1 alongside NASA’s Advanced Composition Explorer (ACE) research satellite, replacing the 17-year old ACE as America’s primary warning system for solar magnetic storms headed towards Earth. Meanwhile, ACE will continue its important role in space weather research.”

Sponsored jointly by NASA, NOAA and U.S. Air Force, the satellite will be primarily operated by NOAA Satellite Facility in Maryland. The date from the satellite will be crucial to understand and predict geomagnetic storm magnitude at regional levels. Why should we worry about geomagnetic storms? One strong enough can leave you stranded mid way on a highway wiping out all the GPS satellites in orbit or disrupt the power grid and leave an entire state in dark. The applications also extend to communications and aviation.

Apart from this, the satellite also has two earth observing instruments on board to measure ozone and aerosol in the atmosphere. Lets wait until DSCOVR begins Discovering! Looks like there is a lot in store. And aurora watchers are going to fall in love with this satellite.