Paz is the Spanish word for “peace” and regardless of its meaning the PAZ mission indeed constitutes a flagship mission of the Spanish Space Strategic Plan (Programa Nacional de Observación de la Tierra por Satélite) established between 2007 and 2011. The plan is based on two complementary satellites with PAZ as a radar satellite and the Ingenio satellite covering the optic needs.

The PAZ mission is set-up as dual-use mission serving the civil and military sector. It will be used for applications of earth observation as welll as surveillance purposes. Probably the latter could explain why the satellite was named as “PAZ”. The Paz mission is funded and owned by the Spanish Ministry of Defence and managed by the Spanish communications company Hisdesat. The applicability in the earth observation domain will range from environmental monitoring, protection of natural resources, surface monitoring, city and infrastructure planning, monitoring of natural catastrophes up to high-resolution mapping, while its usage in the intelligence sector will cover military operations, border control and enforcement of international treaties. It will also contribute to the Copernicus Programme of the European Commission.

The PAZ satellite is operated in constellation with the SAR fleet of the German TanDEM-X mission (Public Private Partnership (PPP) between the German Aerospace Centre  (DLR) and Airbus Defence and Space) with TerraSAR-X and TanDEM-X as its satellites. The constellation was agreed on both sides by Hisdesat and Airbus Defence and Space as the operator of the two German satellites and offers the advantages of an optimized revisit time, increased coverage and improved service. According to Hisdesat “numerous activities that require large quantities of timeous data, like crisis management or the monitoring of surface movements, will benefit from this new constellation.”

With a great delay PAZ finally was launched on 22 February 2018 on board of a Falcon 9 rocket by SpaceX from Vandenberg Airforce Base in California, United States. The original launch was scheduled from the Yasni Launch Base in Russia for 2014, but was cancelled with the geopolitical conflict arising in the Crimea region. At the moment the Paz satellite is in the commission period.

Like the TerraSAR-X and TanDEM-X satellite, PAZ was built by Airbus Defence and Space in strong collaboration with Hisdesat. It uses a Synthetic Aperture Radar and operates with X-band at a wavelength of around 3,1 cm in order to be compatible within the two other satellites of the constellation. According to radar technology it records day and night and is weather independent – almost weather independent, as heavy rain clouds reflect the radar wave. With the capability of two polarization modes at the same time the satellite will indeed also be used to detect heavy precipitation occurrences. Planned for a flight time of 5,5 years, PAZ will orbit the Earth 15 times per day and cover an area of 300.000 km² daily up to a resolution of only 25cm. It flies at an altitude of 514km in the same orbit as TerraSAR-X and TanDEM-X. Equipped by an Automatic Indentification System PAZ will simultaneously combine AIS signals from ships and SAR imagery contributing important monitoring capabilities for the maritime domain.

The Spanish Space Strategic Plan constitutes an important support for the development of the Spanish space industry. For the construction of the PAZ satellite, Airbus as main contractor led a team of 18 European companies, whereas Spanish space companies were heavily involved in the development of the active SAR sensor enabling to expand know-how and enhance the competitiveness in the global space market. According to Miguel Ángel Panduro, Head of Hisdesat, “the PAZ programme is already a success story for Spain’s industrial development. It has created hundreds of skilled jobs over the years, and stimulated research, development and innovation activities in Spain.” 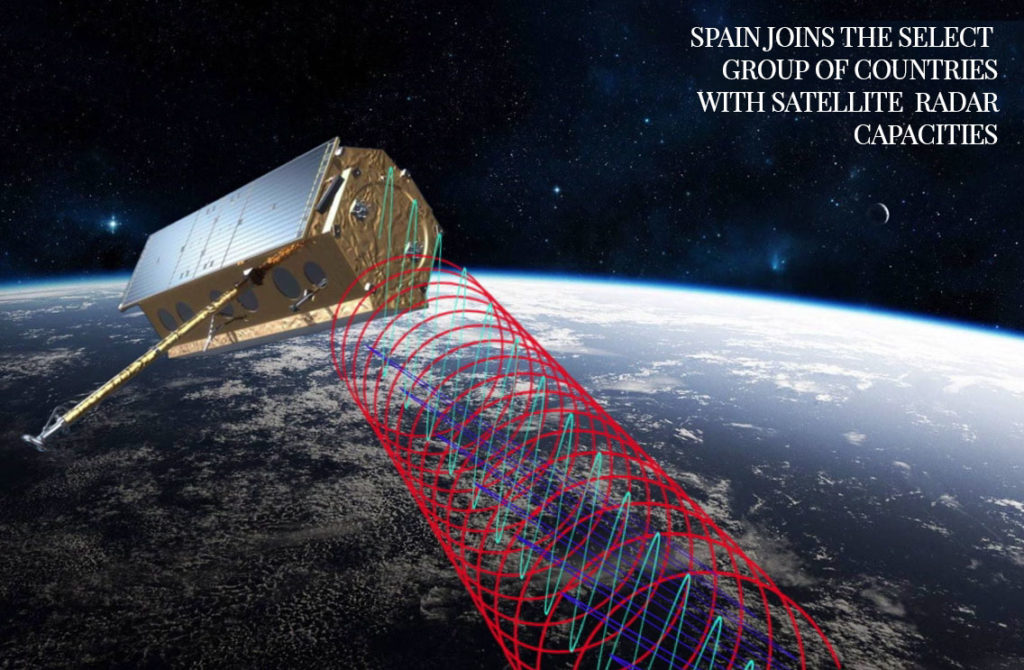 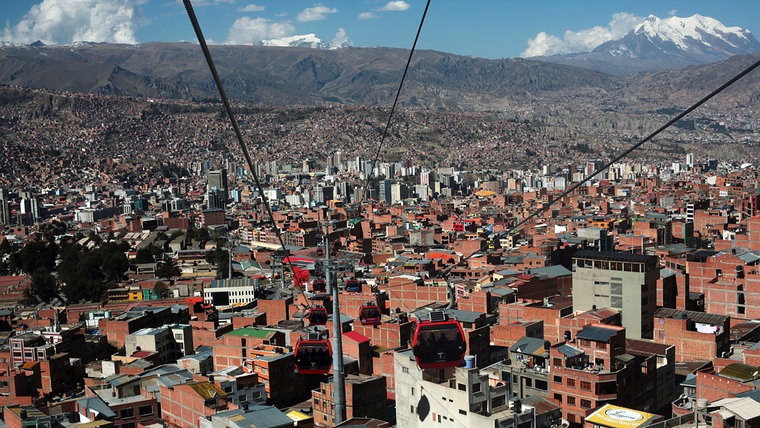 The city of La Paz carries a part of the satellite’s name, but was probably not responsible for its naming. I assume it comes from the application in the surveillance domain. Source: NDR

The second Copernicus Sentinel-3 satellite, Sentinel-3B, was launched on 25 April 2018 to join its twin satellite Sentinel-3A in orbit. Flying in the same orbit with a separation of 140°, the pairing of the Sentinel-3 satellites extends the coverage and data delivery for the European Commission’s Copernicus programme with the objective to observe the Earth. Sentinel-3B constitutes the 7th satellite of the Sentinel mission. Two weeks after its launch the first image was captured on 7 May 2018 showing a sunset scene over Weddell Sea in Antarctica. 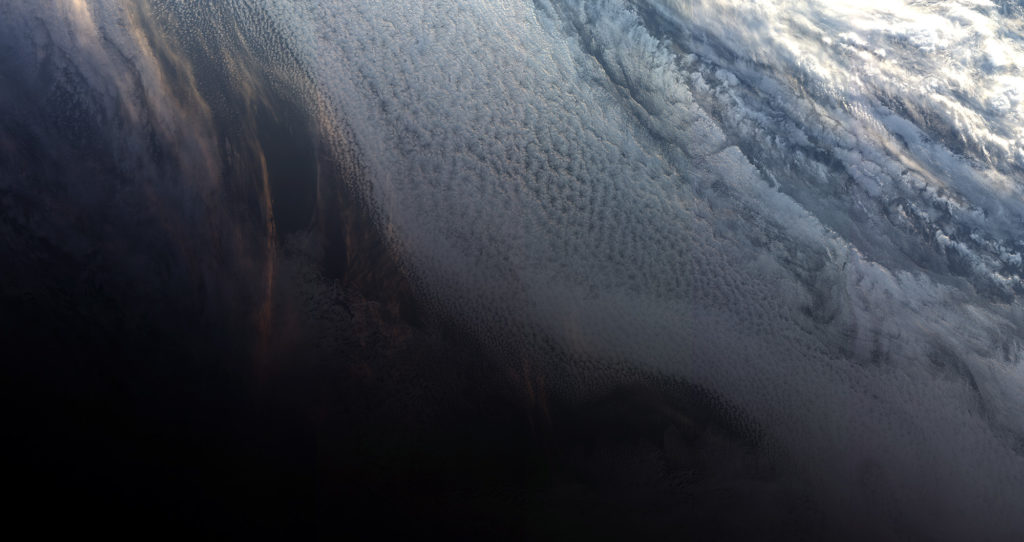 Antarctic sunset from Sentinel-3B taken on 7 May 2018. Source: ESA

Another foto was taken on 8 May 2018, showing Northern Europe almost cloudfree. 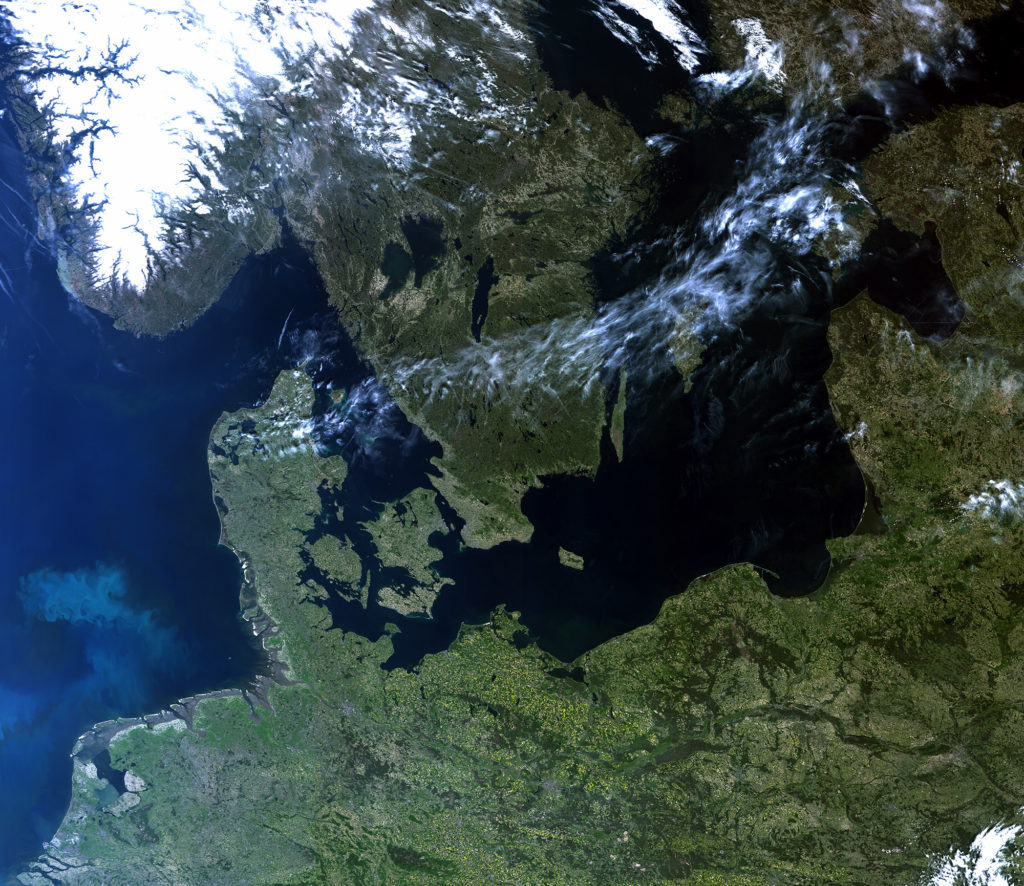 Sentinel-3B image from Northern Europe taken on 8 May 2018. Source: ESA

The Sentinel-3 mission is designed to observe the oceans, changes over land, ice and the atmosphere. It will provide enhanced continuity of ESA’s Envisat and ERS-2 satellites and constitutes the workhorse mission to monitor the Earth’s environments. Near-real time data will be provided for ocean forecasting, sea-ice charting, and maritime safety services on the state of the ocean surface, including surface temperature, marine ecosystems, water quality and pollution monitoring. The Sentinel-3 satellites were built by the French-Italian aerospace manufacturer Thales Alenica Space and belong to the European Commission. As technical partners ESA and EUMETSAT are responsible for the technical implementation and running of the satellites.

Following instruments are carried by the satellites:

The Ocean and land colour instrument (OLCI) features 21 distinct bands between 400 and 1020nm wave length and with that has equivalent precision as the former MERIS instrument (15 bands). It captures the surface at a swath width of 1270km and has a resolution of 300m. Its numerous bands will be used to monitor aquatic biological productivity, marine pollution, the health of vegetation over land and land use changes. The pairing of the Sentinel-3 satellites enables a short revisiting time of less than 2 days for the OLCI instrument at the equator.

The Sea and Land Surface Temperature Radiometer (SLSTR) determines the surface temperature at a precision of < 0,3K (Kelvin). The instrument features 9 spectral bands. The resolution is 500m for the bands in the visible and near infrared spectrum and 1000m for the middle and thermal infrared. The revisiting time for the SLSTR instrument is less than one day at the equator. The continuous measurement of ocean temperature delivers beneficial information concerning weather and climate dynamics. Temperature measurements over land can be used to identify forest fires.

A radar altimeter (SRAL for Sentinel-3 Ku/C Radar Altimeter) measures the distance from the sensor to the surface at a low resolution (applied for homogeneous ocean surfaces) and at high resolution for ice applications. The instrument will be particularly used to measure the height of rivers and lakes, surface wind speed, sea ice height and thickness.

The SRAL instrument is supported by a microwave radiometer (MWR) that performs atmospheric corrections and by three more instruments (GNSS – Global Navigation Satellite Sytsem, LRR – Laser Refrectometer and DORIS – Doppler Orbitography and Radiopositioning Integrated by Satellite) to determine the position in orbit at an accuracy of 3cm.

Following the data policy of the Sentinel mission, the Sentinel-3 data can be obtained for free on the data hub of the Copernicus programme: https://scihub.copernicus.eu/