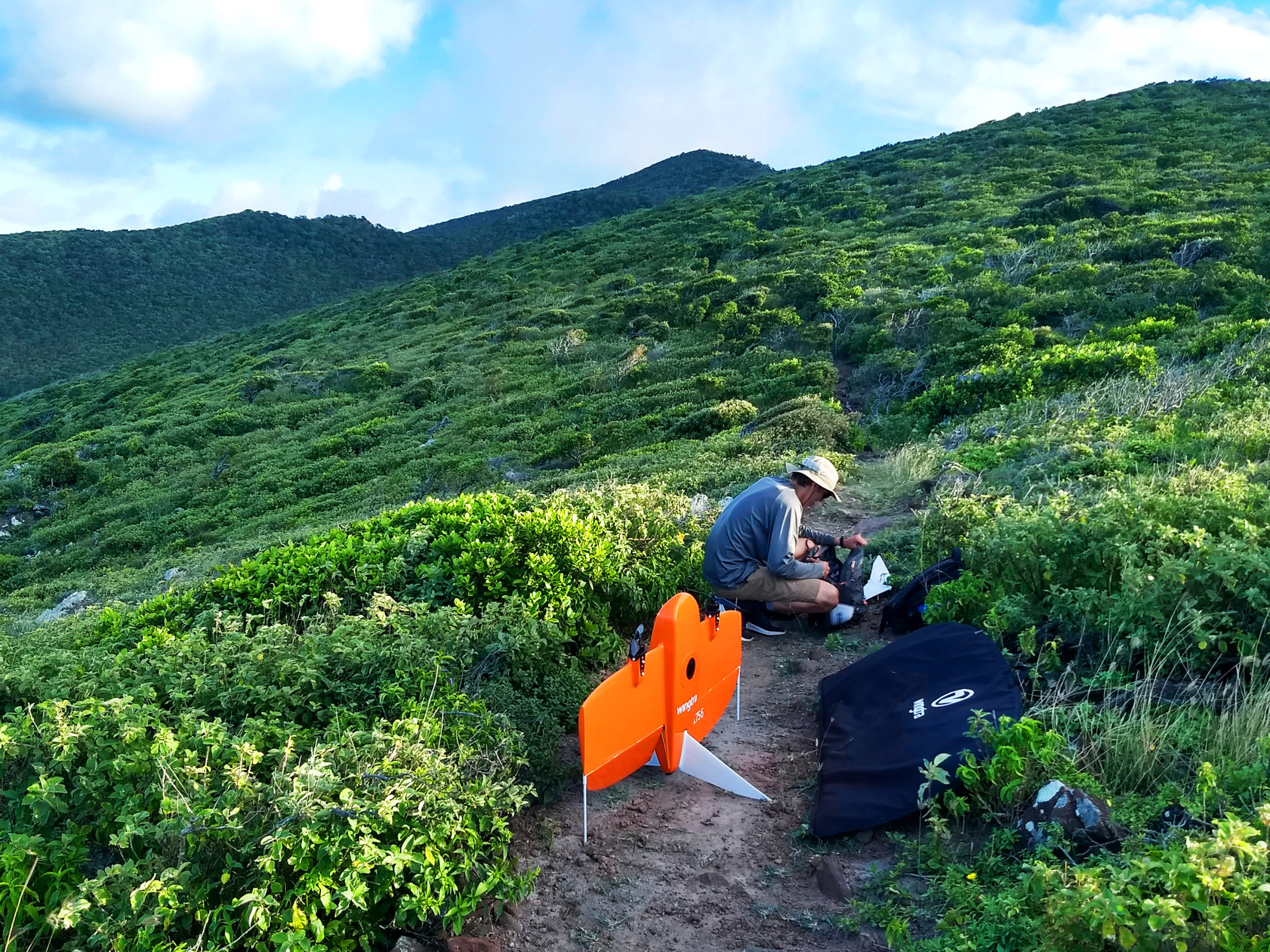 Around seventy percent of the world’s property is unregistered, causing land insecurity and poverty. Creating a system to document and formalize land ownership is the only way to ensure that the land is developed sustainably into the future. Medici Land Governance works in partnership with governments at the national, state and city level to provide low-cost and innovative land-titling solutions that help people secure property rights.

“We map areas to get the underlying data to be used for enumeration, property valuation, and cadastral systems,” said Ben White, GIS Engineer at Medici Land Governance. “We can then build a portal for countries or places to see the data and draw parcel boundaries in it so there’s a record for that property.”

White and a team of three other specialists recently mapped the island of St. Kitts, which is one of two Caribbean islands composing the nation-state of the Federation of St. Kitts and Nevis. The island measures around 168 km2 (65 mi2), and the team mapped 104 km2 (40 mi2) of it with WingtraOne in just 28 days / 65 hours of flight time—overcoming volcanic terrain and windy conditions.

It’s stunning really. The WingtraOne data is very accurate. And with all the new imagery you can see all the different use cases for it, like city planning, tracking new and degraded roadways, and farming certain areas.

Drone mapping instead of hiring costly airplane surveys is opening opportunities to make more high-accuracy maps of more of the world. In particular, WingtraOne’s ability to capture large amounts of high-accuracy data in short periods of time across challenging terrain makes it a cost-effective tool in the push to document land rights. 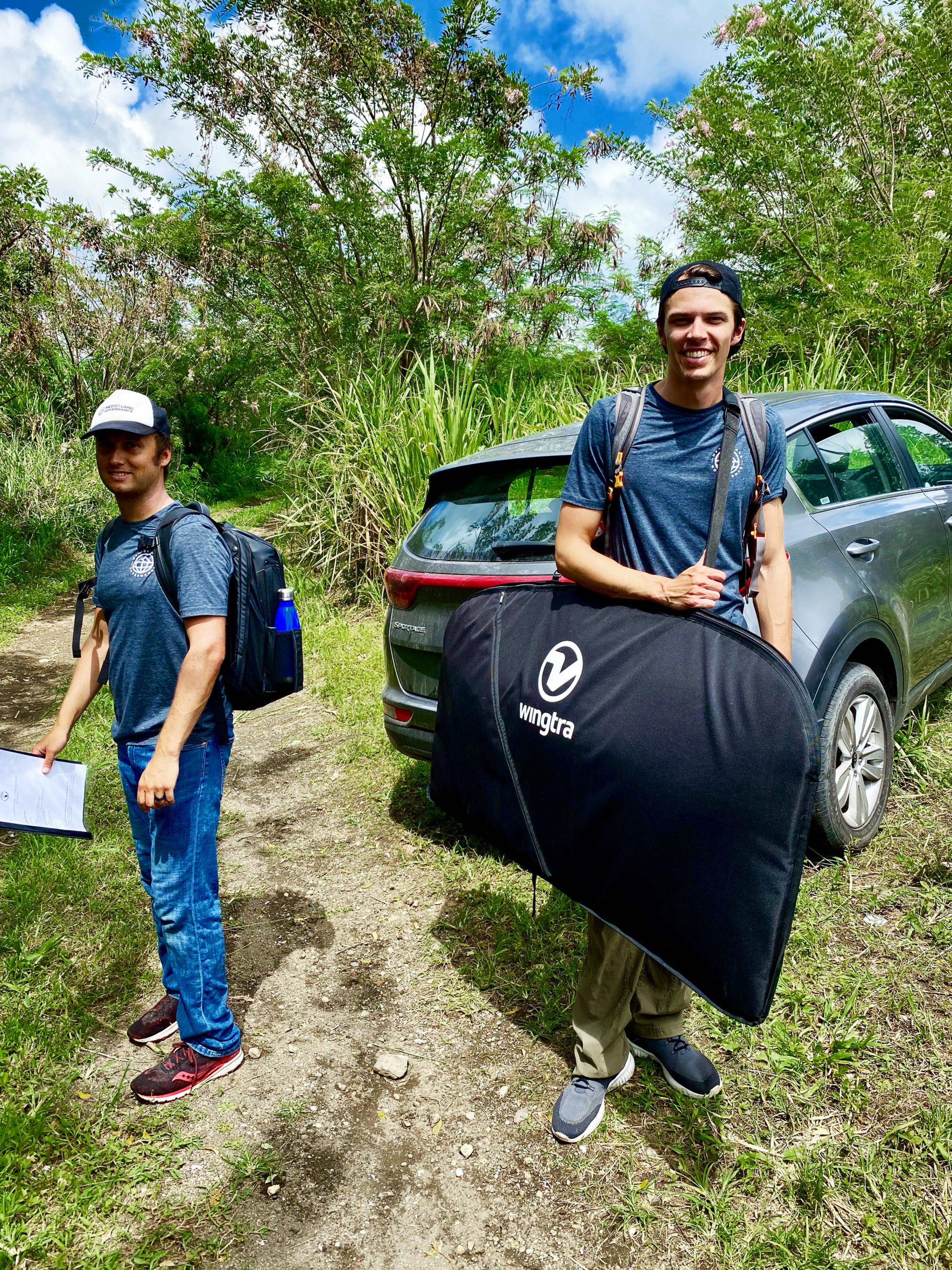 “With WingtraOne, we could fly higher because of the 42 MP camera,” White said. “We could fly at 700 feet (213 meters) above ground and cover a large area in a 45 minute flight. We budgeted 40 days to map what we needed and achieve it in 28.”

A land registry based on high-accuracy location data can help people move out of poverty and enjoy a higher quality of living. First of all, owned property can be taxed in order to fund and expand utilities and services. Drone data can back up the exact area parameters of properties. Environmental conditions improve as well, because if people have proof that they own land, they’re more likely to make sustainable developments and increase investments in land.

“The sense of owning one’s property and having accurate, tamper-proof records of that ownership is invaluable. It provides financial, social and psychological security,” White said. “It’s also really important in terms of having a sense of ‘home’ and a sense of place during international crises like this pandemic.”

Land titling improves socio-economic status and impacts the social determinants of health. Medici Land Governance is a cutting-edge company that offers land registry systems at a lower cost. And WingtraOne now plays a major role in making this possible.

Cutting costs and overcoming challenges to map a volcanic island

For its first projects, Medici gathered location data from manned aircraft surveys plus ground-level data collection to capture fine details of the places they were contracted to cover, White explained. Besides the cost being much more, the knowledge gained by this method was limited as well as the quality of the data. 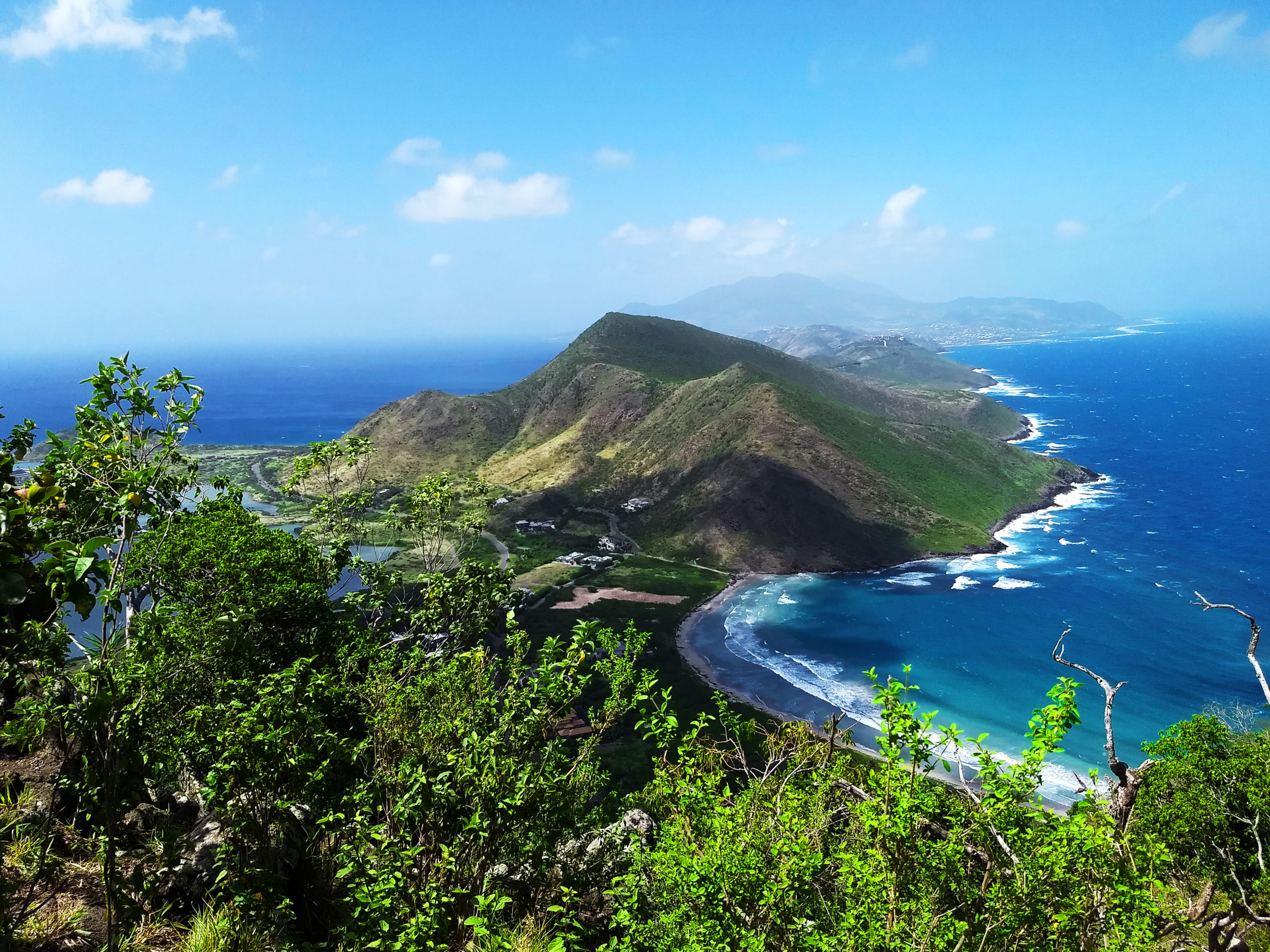 “With drones, I budgeted 70,000 dollars, which was 150,000 dollars less than for manned aircraft data capture,” White said. “And you also have to figure the in-house knowledge gained with a drone. For me to be an airplane pilot, I need a commercial license in the US, which is so much more investment. We are a startup. We’re on the ground to help people, and it’s a lot more feasible with the drone.”

In addition to high cost, airplanes presented safety concerns and issues with cloud cover, since all of Medici’s images must be cloud-free. Satellite data wasn’t sufficient either, White said. Fixed-wing drones could get the data they needed, so they invested in an eBee. But in a place like St. Kitts, they realized they would also need VTOL. 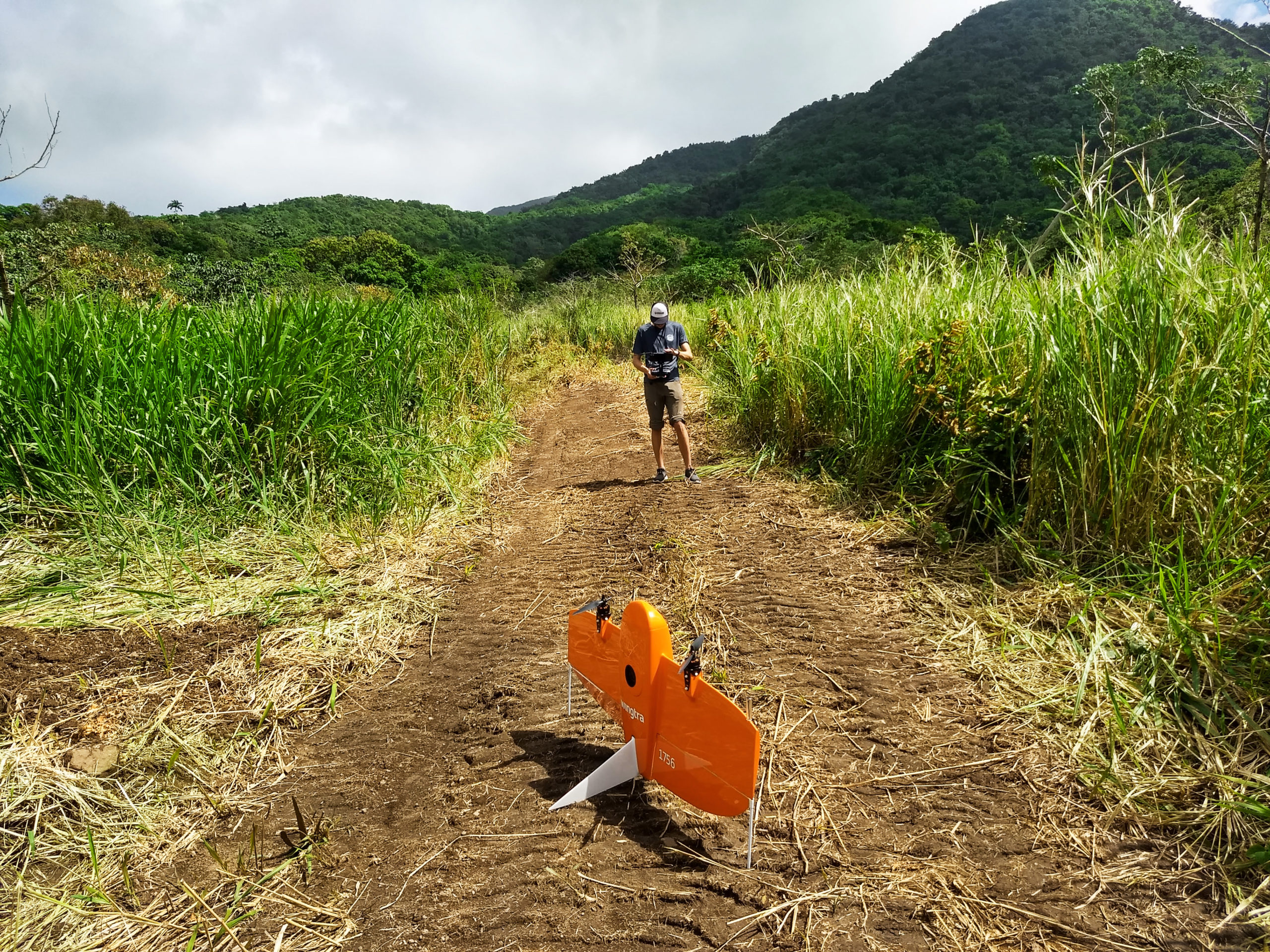 “What we found is that St. Kitts is very windy. It’s also heavily forested and steep because it’s a volcanic island. So I identified places where I could land with the eBee—playing fields, stadiums, parks. We mapped around 15-20 km2 (5-7 mi2) with it.”

We needed 60 meters (196 feet) for an eBee belly landing, or 35 (115 ft) if the landing was steep. Sometimes I only had less than 10 meters to land, so we needed a VTOL, and we liked Wingtra’s approach: focused on surveying and mapping down to 1 cm (0.4 in) accuracy.

“That’s how easy it is with this system”

In addition to capturing high-accuracy data efficiently, White and the small Medici team needed a user-friendly solution to map such a large area in a short time. They also needed it to be dependable.

“The safety checks with WingtraOne are great, White said. “They aren’t overwhelming, and are just enough to ensure you are flying safe. Across most of St. Kitts, we didn’t have internet in the field, so it was really nice to be able to download those base maps and the elevation profile into WingtraPilot.”

Our second pilot was two weeks into working with us. He had GIS experience with manned aircraft routes but had just gotten his remote pilot license, and had never flown a WingtaOne before. He went from not being a drone pilot to mapping a whole island with me. That’s how easy it is with this system.

White said he’s also impressed by the easy and transparent data processing in WingtraHub and Wingtra’s extensive knowledge base, featuring quick image and text modules with support insight on any procedure or troubleshooting that can come up in the field. All of this lined up with the company’s goal to keep overhead lean and knowledge transfer robust among team members.

Say thanks for this article (0)
Wingtra
1 posts
Want to be an author?
The community is supported by 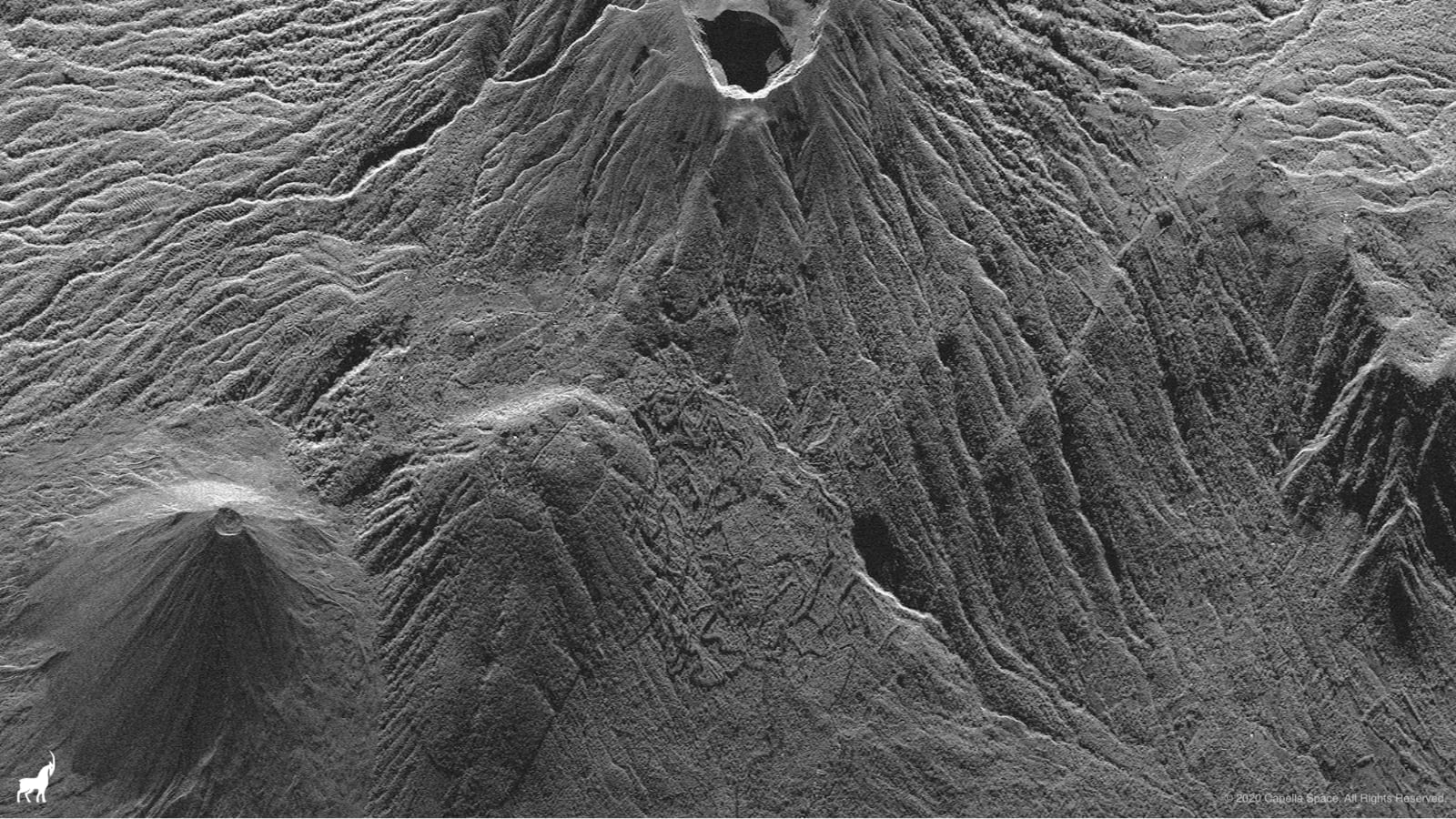 In this Strip image of Santa Ana Volcano, the geometrical patterns of the terraced gardens of Lomas de San Marcelino can be seen beneath the backdrop of the towering Volcan de Santa Ana O Ilamatepec. Courtesy: Capella Space

“When I started Capella Space in 2016, there were a number of European providers operating and building commercial SAR, but the United States had no horse in the commercial SAR race,” Payam Banazadeh, CEO and Founder of Capella Space, explains.

“Capella decided to change that dynamic, and challenge the international competition by bringing a fully American designed, built and operated capability to market. Today we accomplished that goal and we can proudly say we are the first American SAR operator.”

NASA has been using Synthetic Aperture Radar (SAR) technology since the 1970s to detect sub-meter changes to the Earth’s surface, but SAR is not the first thing that comes to mind when you talk about satellite data. Most people envision an optical image – or a photograph taken by a very powerful camera utilizing the light from the sun. SAR, meanwhile, uses radio waves to create an image.

The radio waves used in SAR typically range from approx. 3 cm up to a few meters in wavelength, which is much longer than the wavelength of visible light, used in making optical images. These wavelengths fall within the microwave part of the spectrum.

Over the years, scientists have experimented with different wavelengths for SAR and determined that utilizing X-band microwaves and large bandwidth makes it possible to achieve excellent ground range resolution. The high resolution of X-band SAR and excellent contrast achieved through a process called multi-looking can yield imagery that is uniquely suitable for object detection and recognition using computer vision and machine learning.

In the below image, for example, individual balconies of the tall buildings on either side of the Nakheel Mall, Palm Jumeirah, Dubai are visible, as are the boats moored at the docks behind the buildings. 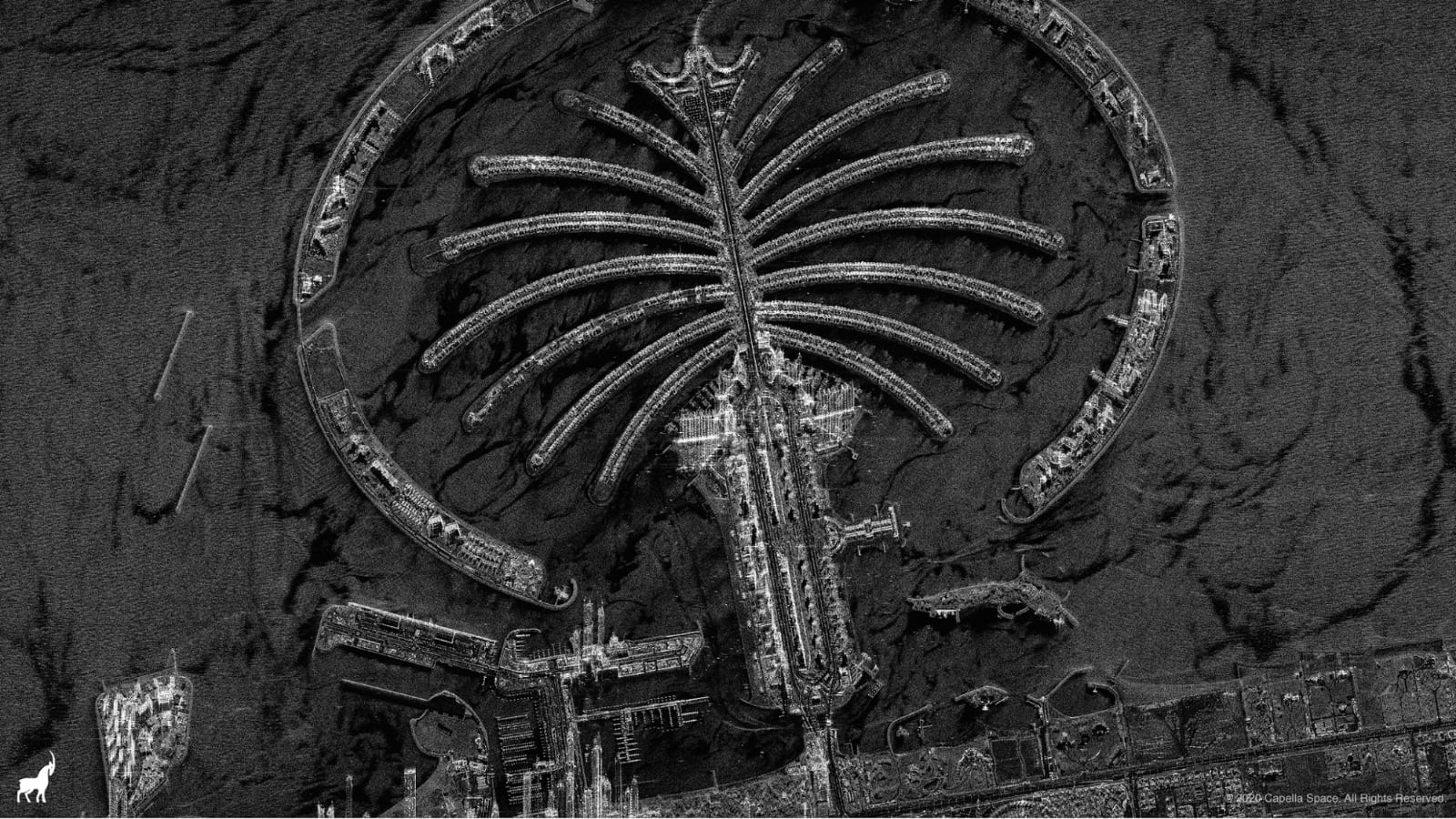 Why use SAR for earth observation

SAR can see through clouds, in all weather conditions and even at night – making it enormously useful for a wide variety of use cases, including persistent monitoring of facilities for defense and intelligence, verifying damage claims for insurance, detection of illegal activities for maritime, mapping natural disaster damage for humanitarian aid, and infrastructure security for the oil and gas sector. 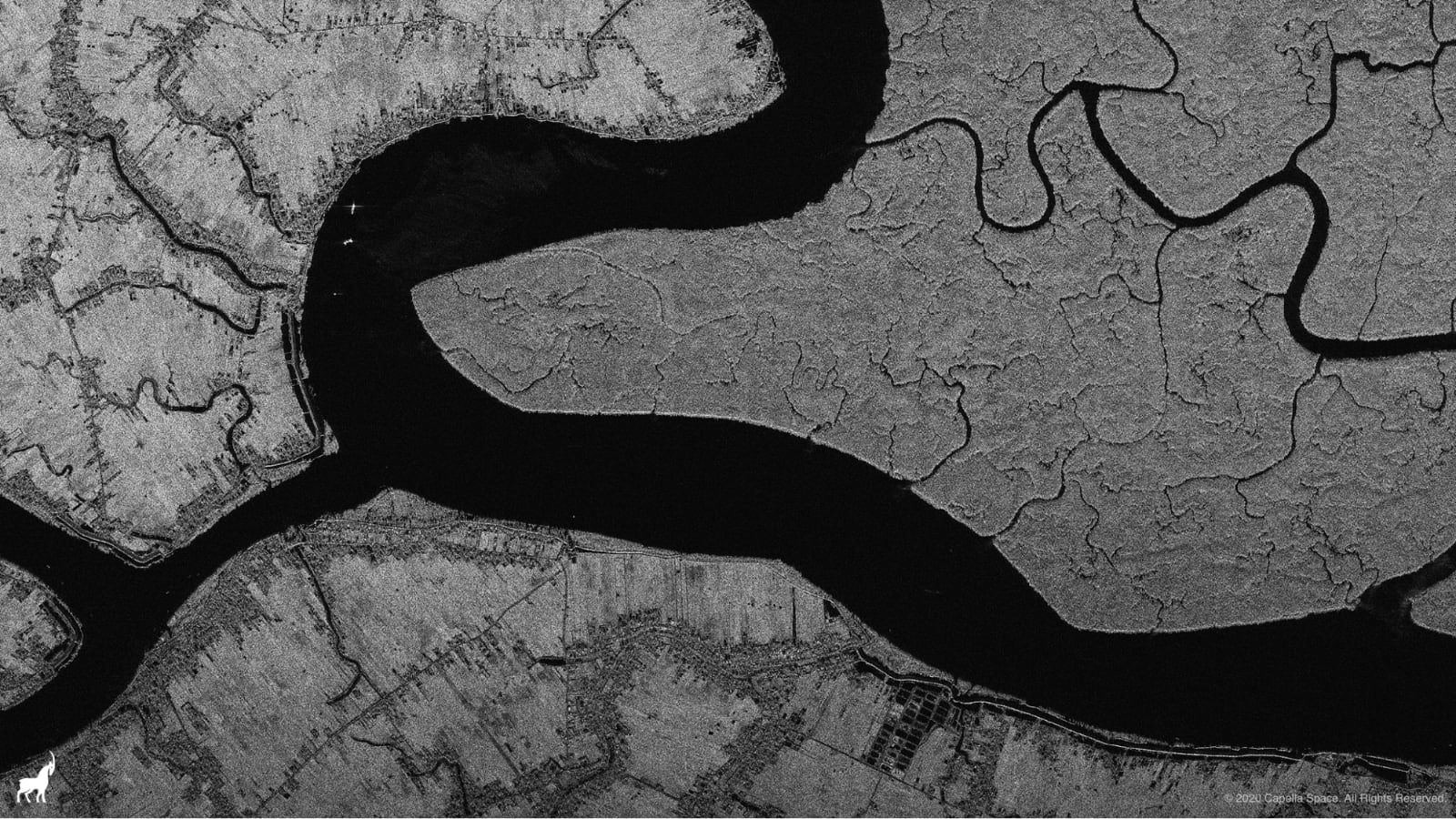 Tree counts, deforestation, and biomass are the three key applications that can be derived from this image in a region notorious for the cloudiness and monsoons that prevent optical imaging.