Is it possible to predict and map droughts by remote sensing?

As we all know, remote sensing means are appropriate for examining problems on a large scale and in areas that are difficultly accessible. Also, remote sensing data provide area-wide information on a certain question and therefore deliver complete (area-wide) solutions.

Droughts are natural hazards not solely caused by precipitation deficits, but also may be induced by humans when elevated amounts of surface water are used for human activities (tourism, industry and agriculture) or by general atmospheric circulation patterns, which act as top (most important) regulators on local weather occurrences. In any case, droughts imply a (considerable) harm for society reducing crop harvests and production of electricity (water power). During the last half a year I tried to find out the potential of predicting local drought events by using information of such macro (climatic) variables in advance on the one hand and remote sensing data on the other hand. The Iberian Peninsula is frequently hit by droughts and at the same time highly influenced by the atmospheric circulation pattern of North Atlantic Oscillation (NAO – difference between sea level pressure around the Azores and Iceland). Researchers found out that especially precipitation patterns in Iberia alternate with a modification of NAO index (NAO is specified by a certain value, which can be positive or negative). The purpose of the study was to investigate if droughts in Iberia are influenced by NAO and under which NAO index they are most likely to occur in which part of Iberia. I used MODIS satellite products to calculate an established drought index, the Vegetation Temperature Condition Index (VTCI), and in this way directly obtained information on droughts.

Indeed, droughts during spring and summer as the most important seasons for plant growth are spatially influenced by the NAO winter index (D,J,F,M). The information at a local scale can be useful for developing an outlook system for soil moisture conditions especially for spring months, which would be of great interest for agriculture in terms of drought management. The map at the bottom shows the correlation between NAO and VTCI in April and June.

The maps exemplify the correlation between VTCI and NAO for one month in spring (April) and summer (June). The dark red areas indicate highly negatively correlated areas between VTCI and NAO, blue areas delineate positively correlated areas. Interestingly the pattern flips between April and June and remains similar during the other summer months. Source: Stefan Mühlbauer 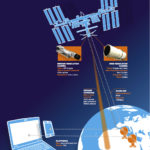 This is really intriguing, it is geo-mind-blowing, it’s gonna change our geo-world. Bringing a new paradigm to  the way we observe the earth.

Just right today, one of my students asked me about the possibility of having a satellite acquiring real-time videos of the earth instead of imagery and smartly I answered him that yes, scientist are working on that, it is the next move for earth observation. I did not even know that UrtheCast is already doing the awesome job.

We are moving from satellite imaging to satellite videoing of the earth in real time. Multi-media geospatial products that integrates, georeferenced satellite videos, images, in-situ sensor data and so on for earth observation and monitoring would be the new direction for geo-geeks.

Courtesy of Spatial Source, Canadian-based company UrtheCast has announced a new video platform that will broadcast near-real time images and video of Earth, captured from the International Space Station (ISS).

A pair of HD video cameras will be installed on the ISS; a medium resolution camera will provide a three-colour still image with a swath of 45 kilometres and a resolution of 5.5 meters; and a high-resolution camera will offer a video image with a frame rate of 3.25 frames per second and a resolution comparable to much of Google Earth.
The platform will allow interaction with the feeds, too, with users being able to zoom in and out, virtually steer the camera from side to side, rewind, and fast forward as they check out areas and things of interest on Earth. Users are also able to search for videos of a particular location, type, or theme.
The UrtheCast web platform will combine a consumer-centric website, mobile application for smart phones, and an open application program interface (API). The API enables third party developers to create their own applications and upload them to the UrtheCast web platform.
ISS is a low orbit, human-inhabited satellite. The station travels at 26,000 km/h, orbiting Earth sixteen times per day, at an altitude of approximately 350 km. The ISS is a collaborative project between the Russian, Canadian European, Japanese, and US space agencies.
UrtheCast has signed an exclusive agreement with RSC Energia, who maintains operational control of the Russian segment on the ISS. RSC Energia will take UrtheCast’s cameras, install them on the outside of the ISS, and provide the necessary maintenance and transfer of the data. The cameras are being built by UK based Rutherford Appleton Laboratories (RAL), who is a world leader in building cameras for aerospace and satellite purposes.
For more facinating explanations, see the video below