Did you ever hear about GOES-R? If you didn’t, continue and broaden your mind! GOES-R is the next generation of geostationary weather satellites in US – the connotation: Geostationary Operational Environmental Satellite-R Series – and is scheduled to launch in early 2016. As we all know the characteristic to remain stably over a point of the earth’s surface makes geostationary satellites highly useful for observing environmental conditions such a weather, atmosphere and fires on the one hand, the other broad span of application is for telecommunications.  GOES-R is the successor of GOES-14 and is a cooperation between NOAA and NASA. While NOAA is going to manage the program, an integrated NOAA-NASA office organisation with personnel coming from both is co-located at NASA’s Goddard Space Flight Center in Greenbelt, Maryland. The GOES-R series is going to continue the 2-satellite system, with operating satellites at 75W and 137W. The main purpose is to continue the observation of weather and atmospheric occurrences with enhanced instruments that will permit improved hurricane track and intensity forecast, real-time mapping of lightning and thus an increased performance in thunderstorm and tornado warning, improved geomagnetic storm forecasting which is important for GNSS and finally improved monitoring of solar features. See a detailed list of the most important sensors in the following section. 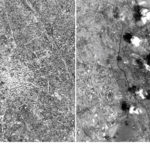 The GOES-R program will mark the first major technological advances in geostationary observations since 1994. Compared to the current GOES program a couple of new instruments and data processing methods will provide a better quality of observation:

The monitoring of solar features is of great importance for aviation flights, spaceflight and astronauts in terms of security. The new sensors on GEOS-R will be:

SUVI will observe the sun in the extreme ultra violet wavelength and will provide full-disk solar images with approximately 5 arcsec spatial resolution at 10 second imaging cadence. SUVI will observe and characterize complex active regions of the sun, solar flares, and the eruptions of solar filaments which may give rise to coronal mass ejections. The main goals of SUVI are:

EXIS detects solar X-ray and solar extreme ultraviolet irradiance in the 5-127 nm range. It will monitor:

SEISS will monitor the proton, electron, and heavy ion fluxes at geosynchronous orbit, which is e.g. critical for estimating the radiation that is hazard to astronauts and satellites. For earth relevant purposes SEISS will warn of high flux events, mitigating any damage to radio communication.

The GOES-R Magnetometer will provide measurements of the space environment magnetic field that controls charged particle dynamics in the outer region of the magnetosphere. These particles can be dangerous to spacecraft and human spaceflight.

Improved instruments also require an enhanced data transmission. The GOES-R Unique Payload Service (UPS) will permit high rate information transmission that is necessary to deliver actual information to immediately to where it is needed. 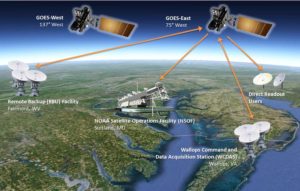 The importance of historic data and some thoughts about meteorology

In Europe meteorological data have been recorded since the 18th century, at this time mainly by royal institutions. In Austria, for instance, the ZAMG (Central Institution for Meteorology and Geodynamics/ Zentralanstalt für Meteorologie und Geodynamik) was founded in 1851 for observing climate by recording meteorological parameters. Already in 1873 the first international meteorological congress took place in Vienna with delegates coming from 16 different countries (Belgium, China, Denmark, Germany, UK, Ireland, Italy, The Netherlands, Norway, Austrian-Hungarian Monarchy, Portugal, Russia, Sweden, Switzerland, Spain and Turkey). At this date the International Meteorological Organisation (IMO), ancestor of the WMO, was founded with the purpose of exchanging meteorological information. I’d say, that meteorology has a long tradition and since that time, different weather features were permanently recorded. This proofes to be highly beneficial for topics as climate change when today we are able to compare those data with the most recent ones and to create climate time series. The new epoch of earth observation allows monitoring far more parameters than only meteorological ones. Like the meteorological time series from the last two centuries those new data will constitute a precious source of information in future. Let’s keep that in mind!

The answer is: Wind Remote Sensing

Wind as an alternative and sustainable resource for producing energy has become reality and enjoys an excellent reputation of being a green form of electricity. The area of wind farms is extending worldwide. Before a new area is developed the wind conditions need to be studied, in order to estimate if an exploitation of wind energy is feasible or not. When a wind park is operating, the wind properties are monitored to detect changes in direction. Therefore, the wind properties somehow have to be observed! Recently (after 2005), remote sensing was discovered to be an alternative for mapping wind properties. Particularly the refinement of existing remote sensing technologies as the LIDAR and SODAR one contributed to an enhanced application of remote sensing for wind mapping. In this article I want to reflect on the use of traditional vs remote sensing means for wind monitoring.

The traditional method to monitor wind over a certain surface relies on MET (meteorological) towers, normally lattice towers that are equipped by anemometers. They can be installed quickly and are useful to deliver data over a long period at fairly low cost. Recently, industry developers moved into untapped regions of lower wind regimes. In those places the wind turbines have to be bigger, in order to catch the energy, the hubs become taller and the rotors longer. Those low-speed wind turbines measure around 80-100 meters in range and are able to capture more reliable winds in greater heights. In this case, the wind data for heights above 60-80 meters have to be extrapolated (as the standard towers are too low), which implies uncertainties e.g. about the site’s potential production and therefore a higher risk and difficulties to get a project financed. On the other side, higher MET towers to advance respective heights are disproportional more costy than standard height towers and therefore would quickly loose the edge of being a cheap technology. Due to this problems remote sensing gained importance in the discussed topic.

The two favoured options of wind remote sensing are SODAR and LIDAR. Sodar emits and records acoustic impulses. It measures wind properties up to a height of 600m, whereas the measurements above 120m are not useable for exact wind mapping due to deteriorating quality. The signal may be eroded by obstacles (trees, objects, …), precipitation and even strong wind velocities that produce sounds.

Since its invention in the 1960s, LIDAR was used for wind measurements not before the early 2000s. Lidar generally provides data with better accuracy, especially at greater heights (up to 200 meters) and is less susceptible to adverse site conditions. It is significantly more expensive than Sodar or MET towers. Both remote sensing technologies are faster in installation and more flexible than MET towers, which on the other hand are more appropriate for long term observations. LIDAR’s laser does not penetrate fog and anemometers on MET towers on the other hand are susceptible to icing. Every technology has its advantages and disadvantages, its application depends on the scope and needs. Generally, Sodar and Lidar tend to get attention before and during the construction of windfarms, whereas MET towers provide a good and useful data source throughout the entire project lifespan. Still, with the development of side-scanning lidars experts forecast the solely use of remote sensing as a desicion tool for developing new wind farms and even a gain of importance in the operating phase. Technology will proof. 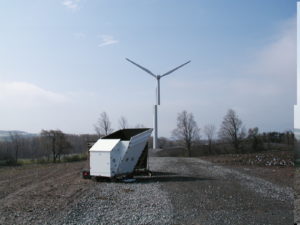 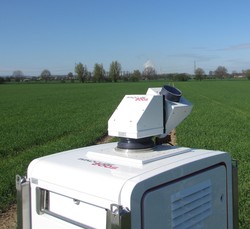 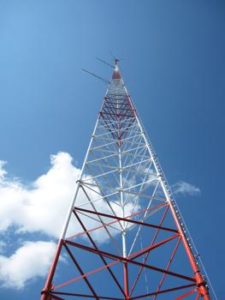