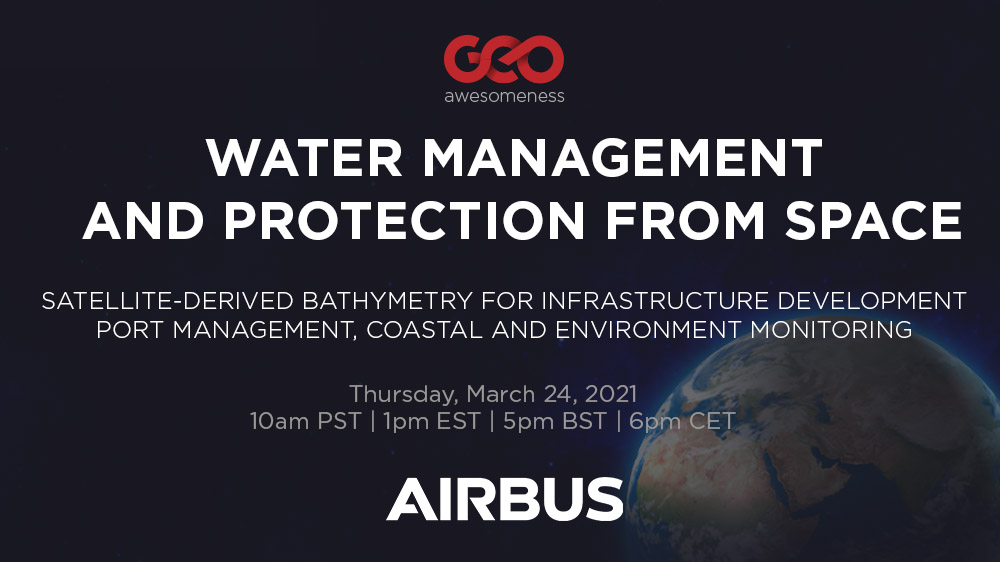 Water is the lifeblood of Earth, covering more than 70% of our planet’s surface. It not only gives life, drives weather, regulates temperature but it’s also the major mean of commercial transportation, trade and a vital source of sustenance. Yet for all of our reliance on the water resources, more than eighty per cent of this vast, underwater realm remains unmapped.

Earth Observation data open new possibilities for water management and protection from Space. The emerging field of Satellite-Derived Bathymetry (SDB) is gaining major importance for infrastructure development, port management as well as coastal and environment monitoring among other applications. The potential of remote sensing technologies for maritime use cases has been noticed by Space sector.

Airbus is the first satellite data provider that equipped its new high-resolution Pléiades Neo constellation with Deep Blue spectral bands, particularly for bathymetry applications. It provides the quality and resolution of data which is a game-changer enabling the entirely new spectrum of application.

During the meetup, we will discuss with top experts in the Satellite-Derived Bathymetry space as well as users of the data from: 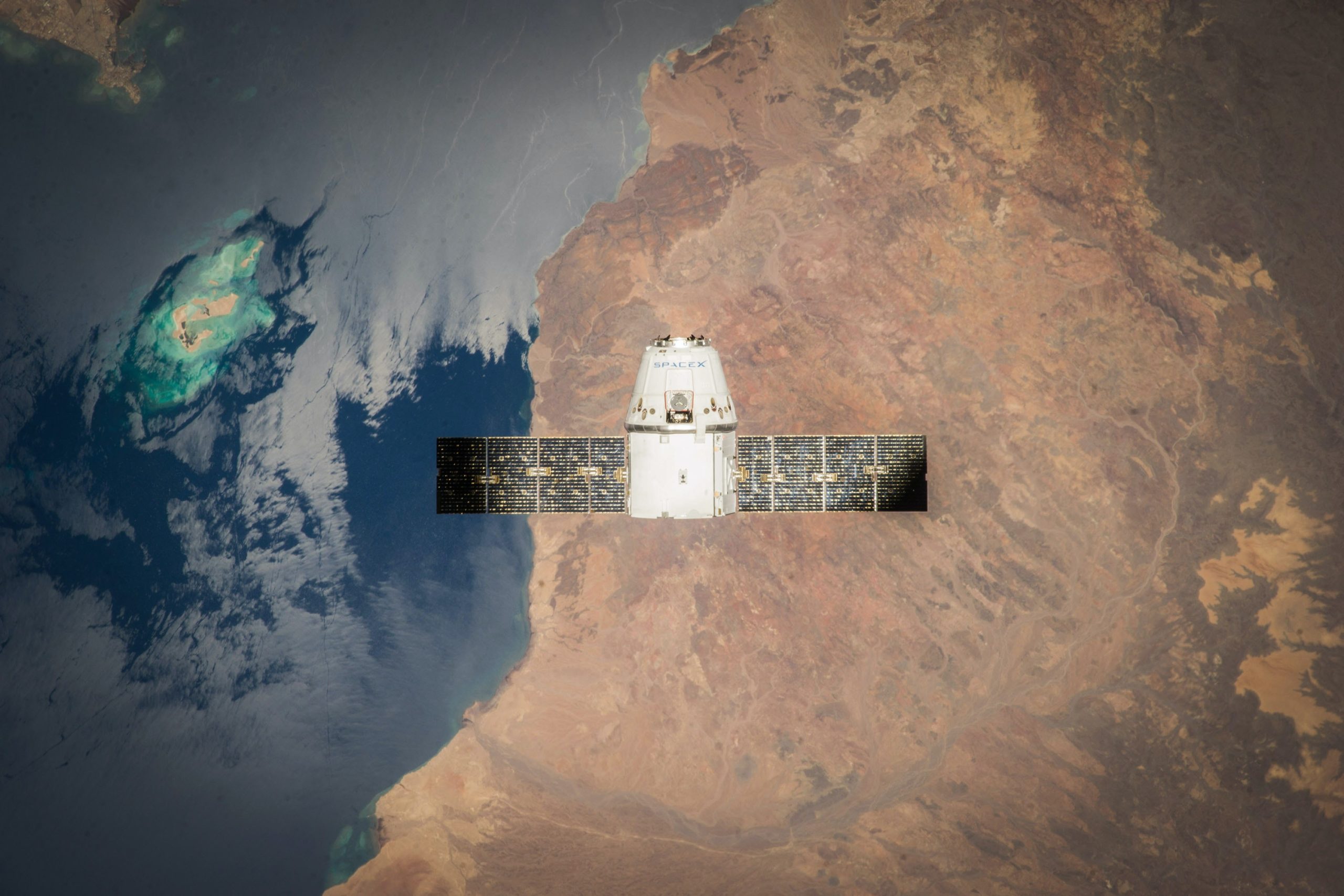 More and more nations and private companies are becoming interested in the business potential of space, from earth observation and telecommunications to the natural resources that could be found on other planets. The space race is once again becoming the challenge of the moment.

After man stepped on the moon in 1969, marking the high point of the first space race, it was difficult for the superpower rivals to set new goals that matched this ambition. The cost of space expeditions was also—and please excuse the pun—astronomical. As a result, between 1970 and 2010, space agencies, with NASA at the forefront, achieved relatively little in terms of space exploration.

Attention has long been focused on exploiting the potential of satellite technology on the ground, firstly for military and spying purposes, then for navigation (GNSS systems) through telecommunications (e.g. satellite TV, available since 1978), to numerous scientific research projects focused on terrain mapping, weather and climate research, and of course commercial applications, for example in agriculture. The first Landsat satellite was launched in 1972. Still, space technology has historically only been available to large government agencies, defence companies, and a few startups.

More recently, however, several events have driven the growth of the New Space sector. In 2015, Barack Obama signed the Commercial Space Launch Competitiveness Act, and the sector, which was considered strategic, opened up to private initiatives. This changed the purchasing model of space agencies (mainly NASA), who moved from merely paying for the construction of a solution they had designed themselves, to buying the whole solution, thus giving room for innovation in the private sector.

Another factor has been the activation of billionaires like Elon Musk, Richard Branson, and Jeff Bezos. The more they invest in the development of space technologies, the more the cost decreases of associated projects, like building space launchers and rockets, constructing manned capsules, or expanding the network of artificial satellites. At the same time, they activate dozens of startups that want to launch their own satellites or build solutions based on satellite data and space technologies. Just as importantly, they are also showing venture capital that New Space is worth investing in.

The changing face of space stations

In 2011, NASA ended space shuttle missions, and the International Space Station (ISS), managed by a group of countries, will cease operations in 2028. However, Texas-based company Axiom Space will be adding its own modules to it, and it will be converted into a commercial space station.

Meanwhile, in October 2021, Jeff Bezos announced that he was proceeding with the Orbital Reef commercial space station project, which could become operational by the end of this decade. Starlab, announced in December 2021, is another such venture, being developed by Voyager Space, Lockheed Martin and Nanoracks.

These facilities in low Earth orbit are intended to be destinations for space tourism, sites for scientific research, and centers for the development of “off-Earth” businesses.

Compared to commercial space stations, launching satellites for Earth Observation purposes seems routine and boring, but the industry is huge. One of the pioneers in this market is French company Airbus, which, in addition to building passenger aircrafts, has been a leader in satellite technology for over 50 years. In 2022, Airbus will complete the constellation of 4 Pleiades Neo satellites mapping every place on the globe twice daily, with a resolution of 30cm. “The traditional” model of satellite systems has been challenged by companies like Planet that are betting on large constellations of microsatellites instead, but Airbus’ decades of experience, know-how, and infrastructure present a huge competitive advantage.

Airbus defines itself not as New Space but as Future Space, emphasizing its pioneering role in building next-generation space and satellite technologies. Besides Pleiades and Pleiades Neo there are over 150 Earth Observation satellites operated by space agencies and private companies, fueling hundreds of startups, building solutions on the top of satellite data.

Remote Sensing analytics becomes one of the major elements of the New (or Future) Space phenomena. The industry is still in its early stages and fights to overcome the basic barriers of adolescence: access to data, which has been traditionally only available to governments and the military as well as storage and computing resources critical to process and analyze terabytes of image data daily. One of the startups which challenges the status quo is Berlin-based UP42, which provides developers with a marketplace to buy satellite data, and then infrastructure to process and analyze it. By bringing together data providers of all varieties, UP42 helps expand the applications of geospatial tech and limit the entry barriers for many solutions providers. It enables other startups to build industry-focused solutions like Live EO and AI Dash for Power and Utilities, Tesera for forestry or Spacenus for precision agriculture.

Another interesting business area for space exploration is internet provision. Up to the end of 2021, just two private companies—SpaceX’s Starlink (which Elon Musk is behind) and Britain’s One Web—have deployed 1,700 small satellites to provide internet access to the most remote areas of the globe. The eventual plan is to deploy 40,000 satellites, connected in mega-constellations, to improve telecommunications. Amazon’s chief executive has now responded to this with ‘Project Kuiper’. It envisions deploying more than 3,200 satellites in low-Earth orbits to create a competitive satellite internet system.

Coming back to the Moon

The activation of the private sector, combined with a global space dominance race between China and the US, has also been a signal for increased efforts by state agencies. In three years time, American astronauts will once again set foot on the Moon. The European Space Agency (ESA) and its counterparts in Russia and China are also interested in exploring Earth’s natural satellite.

February will see the launch of the first of three phases of the ‘Artemis’ program, carried out by NASA, ESA, and private space companies, which will lead to sending humans back to the moon with the landing scheduled for 2024. The mission will use the so-called ‘Gateway’, a sort of space ‘port’ orbiting the Moon, on which astronauts will anchor a rocket, before flying on in the lander (a role to be fulfilled by the Space X spacecraft).

This time, however, the Moon is only the first stage of a much longer journey. Governments, private companies, research centers, and universities will collaborate on innovative technologies such as ultra-low-water-use crops, sustainable energy solutions, and protection from cosmic radiation. The main objective of lunar exploration is scientific research, but that is not all. An important goal is to establish an Earth-independent supply chain for further space exploration.

Private companies, such as Moon Express led by Robert D. Richards or Blue Origin founded by Jeff Bezos, have their own plans for the Moon. It is almost certain that in a few years there will be space stations ready to exploit lunar resources—such as helium-3. The isotope is extremely rare on our planet, but there may be deposits of up to 11 million tons on the Moon. Scientists hope that it could be used as a clean and very efficient source of energy, emitting no carbon dioxide and generating no radioactive waste.

However, this is a dream for the future. Initially, the harvesting of ice from craters at the lunar poles may be more important: This could be converted into hydrogen, which could be used as fuel for onward journeys toward Mars, asteroids, and other planets. Due to the weak gravity on the Moon, rocket launches from there would be much easier than from Earth.

Some asteroids are already within reach today, and many of these celestial bodies, located relatively close to Earth, are great repositories of metals. It can be assumed that the exploration of the asteroid belt will not end there. Perhaps by the end of the century, manned missions to the moons of Jupiter and Saturn will be completed to explore the oceanic worlds that may exist under the icy crust of Europa and Enceladus, and the lakes of liquid methane on the surface of Titan.

The speed at which technology around Space moves forward presents a remarkable opportunity. In 2020, we crossed an important milestone, for the first time in human history, humans went to space using a vehicle owned not by any government, but by a private company. It seems that during the next decades, it will have a tremendous impact on the way we live on Earth (and perhaps beyond it). We are just at the beginning of enabling the use of Remote Sensing technologies to solve important environmental, social and industrial problems or looking for more sustainable natural resources outside of our planet.

On the other side, it seems that space is exponentially a contested domain. The recent Russian anti-satellite missile test made it clear: space is a strategic place where big powers are now competing. Historically, where there is too much politics, and there is too little cooperation between different blocks. It poses a risk, but it may create an incentive to further invest in technology development, which can push the entire industry forward.

The development of Earth Observation technologies makes it much more difficult to hide unwanted activities on the ground and it should enable increased political transparency. In reality, the concept of transparency is much more fragile, delicate, and incomplete as the satellite data vendors are significantly influenced by the government needs and policies often without sufficient democratic oversights. Using satellite data out of context has been often used by governments to justify sometimes questionable political decisions and in that regard provides an advantage to those countries controlling the access to space. It is not an argument against satellite data but rather for increased pressure by the international and scientific community.

For the geospatial industry, it is certainly a time to start building solutions on top of satellite data that are more and more accessible, high resolution and frequent. Problems that were previously difficult or too expensive to be solved with the use of ground or aerial data (e.g. drones) are now being challenged by high-resolution satellite imagery. Let’s be creative. It’s time for the geospatial sector to innovate.