The GEO Illustration Challenge is asking participants to give our planet a new face. The theme is “Transcending Borders – and Changing the Earth’s Image”. From illustrators and designers to keen Photoshoppers, everyone is invited to participate. The grand prize: a VIP invitation to a 2016 ESA satellite launch at Guiana Space Centre near Kourou, French Guiana.

From space, the lines between desert and fertile terrain, populated a 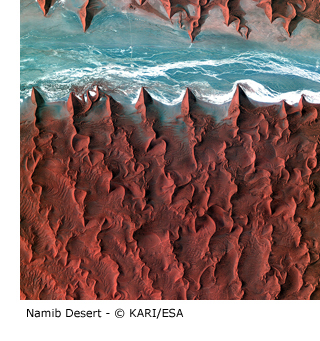 nd uninhabited regions, and dense rainforest and cleared land are clearly visible. Indeed, they are what give contours to the very face of Earth. Also evident, but more difficult to construe, are the borders drawn by humankind: between nations, ethnicities, religions, and the wealthy and impoverished.

As part of the 2015 Copernicus Masters competition, GEO magazine is inviting interested participants to apply graphical and artistic techniques to satellite imagery and illustrate them in vivid, artistic ways that reflect the theme “Transcending Borders”.

Participants will receive access to free satellite image data provided by the European Space Agency (ESA) through the competition website. An expert jury will judge every complete submission based on its informative content and aesthetic value.

The submission phase for the GEO Illustration Challenge “Transcending Borders” will run from 15 April to 13 July 2015 at www.geo.copernicus–masters.com.

The annual Copernicus Masters competition awards prizes to the most innovative solutions for business and society based on Earth observation data. www.copernicus-masters.com

Copernicus is the most ambitious Earth observation programme to date. By providing accurate, timely, and easily accessible images and data on our planet’s land, oceans, and atmosphere, it is improving our ability to manage the environment, understand and mitigate the effects of climate change, and ensure civil security. http://www.esa.int/copernicus & www.copernicus.eu

AZO has been carrying out the Copernicus Masters competition on behalf of ESA since 2011. By leveraging its extensive experience as a specialist in building and maintaining global innovation networks and organising related competitions, the company supports product innovations and the creation of new businesses, particularly in the field of commercial aerospace applications. www.anwendungszentrum.de

Say thanks for this article (0)
Sponsored Article
18 posts
Want to be an author?
The community is supported by:

The idea of using high accuracy GPS/GNSS Geodetic receivers as Earthquake sensors has been around for a while now. The fact that these high accuracy receivers can detect and measure ground displacement in the order of a few millimeters makes them good candidates for an Earthquake early warning system. (Reference: Application of real-time GPS to earthquake early warning in subduction and strike-slip environments). There are only so many GPS/GNSS permanent observatories in the world but most smartphones these days have a GPS/GNSS sensor onboard although their inaccuracies leave much to be desired for such scientific applications.

However, a group of scientists published a paper titled “Crowdsourced earthquake early warning“ on April 10th, 2015 suggesting that GPS found in Smartphones could give a good indication of seismic activity. They believe Crowdsourced GPS/GNSS data could essentially work together with existing systems to help fill the data gap with Earthquake Early Warning networks.

Global seismic hazard and extent of EEW. Symbols show the few regions of the world where public citizens and organizations currently receive earthquake warnings and the types of data used to generate those warnings (7). Background color is peak ground acceleration with 10% probability of exceedance in 50 years from the Global Seismic Hazard Assessment Program. (Reference: Minson, et.al)

Earthquake Early Warning Systems  are designed to pick up the first tremors of a Earthquake in a region and provide a warning to citizens and National agencies based on computations about where the Earthquake is centered and how strong its likely to be. In countries that are economically sound, such a   network is realized with the help of expensive seismograph-based system but not everyone can afford one, maybe Smartphones could fill that gap.

Can Smartphones really be used as Earthquake Early Warning Sensor?

Smartphones of today have the essential sensors that you would find in a decent Earthquake sensor i.e a GPS/GNSS sensor and accelerometer. Of course, their accuracy is at the least worse by a few orders of magnitude in comparison to an expensive Geodetic receiver/Seismograph but the hope is what they lack in accuracy, they will be able to compensate with quantity.

If you are wondering how they differentiated between shifts due to seismic activity and regular phone movements, the answer lies in Crowdsourced measurements. The ubiquitous nature of smartphones helped the researchers separate normal movements from an actual tremor just by correlating the motion with similar movements in nearby phones.

Assuming that such a system is in place and Crowdsourced GPS/GNSS data is being gathered using an app, there are two fundamental issues that the researchers had to consider

How close are we, then, to operational crowdsourced Earthquake Early Warning system?

To quote the authors of the paper,

As we have shown, current smartphones could be used immediately to provide warnings for the largest earthquakes, such as those associated with subduction zones, worldwide. Additionally, because of the enormous number of potentially available devices, a crowdsourced approach could be very conservative in terms of data quality control (for example, excluding devices with poor sky view or subject to unwanted accelerations such as from automobile usage) without sacrificing performance. – Minson, et.al

More often that not, we see only commercial applications for Location data. It’s refreshing to note that crowdsourced location data (GPS/GNSS to be precise) can help save lives.

Science has found a use for the Internet of Things, where any GPS-enabled device could help crowdsource seismic activity and save lives – Vocativ

Crowdsourcing is an important phenomenon that has only begun to be used across the sciences and must be considered seriously. Given the long repeat times between earthquakes and tsunamis and limited budgets with which to take preventive measures, crowdsourcing may be an important part of building, maintaining, and operating warning systems. – Minson, et.al

The researchers have already planned a pilot study in Chile, where they plan to build an Earthquake Early Warning system using commercially available phones equipped with an external GPS chip (to circumvent the operating system issue). It is to be noted that Chile doesn’t have an Early warning system and considering that each phone is only going to be used for Earthquake sensing, the researchers hope most of the intermediate challenges would be solved and the results could be good.

But even in the short term, Brooks says, crowdsourced early detection does not necessarily have to stop at smartphones. “It’s about the Internet of Things, really. Cars, robotic vehicles, WiFi hubs—anything that has GPS associated with it could be used.” Vocativ

Interested in reading the full paper, here’s the link.