Galileo satellite has successfully ‘’moved on’’ and is transmitting signals.

After the failure at the last stage of Soyuz-Fregat in 22/08/2014, (Two Galileo Navigation Satellites launched into wrong orbit) the Galileo’s satellites FOC 1 and FOC 2 was required to follow a series of manoeuvres, in order to reach a useful for Navigation purposes orbit(Galileo satellite is ‘’moving out’’ to a new orbit) .

After 17 really tough days and 11 manoeuvres, the ESA’s scientists managed to deliver the satellite in the redesigned orbit, suitable for Navigation purposes. So, finally on Saturday 29 November 2014, the fifth Galileo satellite transmitted its first navigation signal in space. When the satellite reached the new target orbit, ESOC successfully switched on the navigation payload.

The manoeuvres that were performed to the satellite, managed to gradually nudging the satellite upwards at the lowest point of its orbit (perigee). After the applied manoeuvres, the new altitude of the satellite was 17.213 km and the orbit more circular. The successful commands were issued from the Galileo Control Centre by Space Opal, the Galileo operator, at Oberpfaffenhofen in Germany, guided by calculations from a combined flight dynamics team of ESA’s Space Operations Centre, ESOC, in Darmstadt, Germany and France’s CNES space agency.

Another problem that ESA’s scientists have during all that period that the satellites remained in lower orbit was the orientation of the satellite. The main problem was the earth sensor which was not reliable, since the satellite was close to the earth and that have caused problems to the functionality of the sensor. So until the manoeuvres started, the combined ESA–CNES team maintained the satellites pointing at the Sun using their gyroscopes and solar sensors. This kept the satellites steady in space but their navigation payloads could not be used reliably. In the new orbit, the satellite’s radiation exposure has also been greatly reduced, ensuring reliable performance for the long term.

How do they ensure that the satellite is working properly?

Of course after the launch and so many manoeuvres, ESA wanted to ensure that the payload is still able to provide the designed signal. So after the activation of the payload on 29th of November, ESA began the full ‘In-Orbit Test’ campaign. The main task of the campaign was to use a 20 m diameter antenna and study the strength and shape of the navigation signal at high resolution.

After warming up the various payload elements (especially the Passive Hydrogen Maser atomic clock), the payload’s first signal in space was transmitted. After a while the L-band navigation signal was monitored by the large antenna. The first Galileo FOC navigation signal-in-space transmitting in the three Galileo frequency bands (E5/E6/E1) was tracked  by Galileo Test User Receivers deployed at various locations in Europe, namely at Redu (B), ESTEC (NL), Weilheim (D) and Rome (I). The quality of the signal was good and as expected.

What’s going on with the other satellite that was delivered in wrong orbit?

At a press conference on January 16,(Jean Jacques Dordain meets the Press) Director General Jean-Jacques Dordain of the European Space Agency (ESA) announced that the second errant full-operational capability (FOC) satellite launched in August, had started its orbital change manoeuvre the previous day. He anticipated, that the orbital change would be completed and the final orbit will be lower as it was also in FOC 1 satellite. The whole procedure will be finished in a few weeks and till now both satellites working well, fully operational and providing excellent position data. It is really important to keep in our mind that in that press conference the General Director mention that during 2015, 6 more satellites will be launched. Two of them, that were supposed to launch at December 2014 and the other 4 that were planned for 2015. Finally after a question about the failure of August, he stated that the actual launch schedule and launch vehicles are still under discussion, and he said that the European Commission (EC) would make a decision at the end of January on this issue.

The only thing that we can do, is to wait for the next updates about Galileo GNSS. In any case will be really interesting to see if the FOC2 satellite will be perform the manoeuvres successfully and if Soyuz-STB/Fregat-MT or Ariane 5ES ,whereby ESA have already sign a contract for the last 12 satellites, will be the next launch vehicle for the Galileo satellites FOC3 and FOC4.

Say thanks for this article (0)
Eleftherios Karagiannis
2 posts
Want to be an author?
The community is supported by: 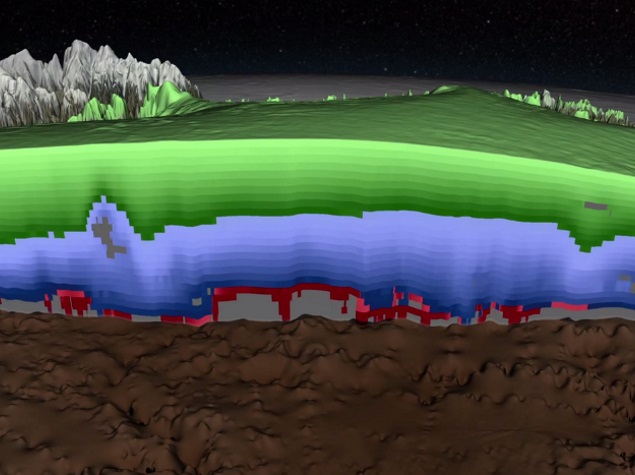 Deep ice sheets close to North and South Poles are a natural storage of historical records of climate changes over last thousands years. Using ice-penetrating radar data, NASA scientists have built the comprehensive map of layers deep inside the ice of Greenland.

Greenland’s ice sheet is the second largest mass of ice on Earth, containing enough water to raise ocean levels by about 20 feet (6 m). This new map, prepared on the basis of radar scans collected by  Operation IceBridge, gives scientists data to determine the age of large swaths of Greenland’s ice as well as to monitor its melting which dramatically accelerated over the past two decades.

The radar works by sending signals into the ice and recording the strength and return time of reflected signals. From those signals, scientists can detect the ice surface, sub-ice bedrock and layers within the ice. Scientists are especially interested in knowing more about ice from the Eemian period (115,000 to 130,000 years ago) that was roughly as warm as today.  Based on historical knowledge we could try to predict the future climate changes.