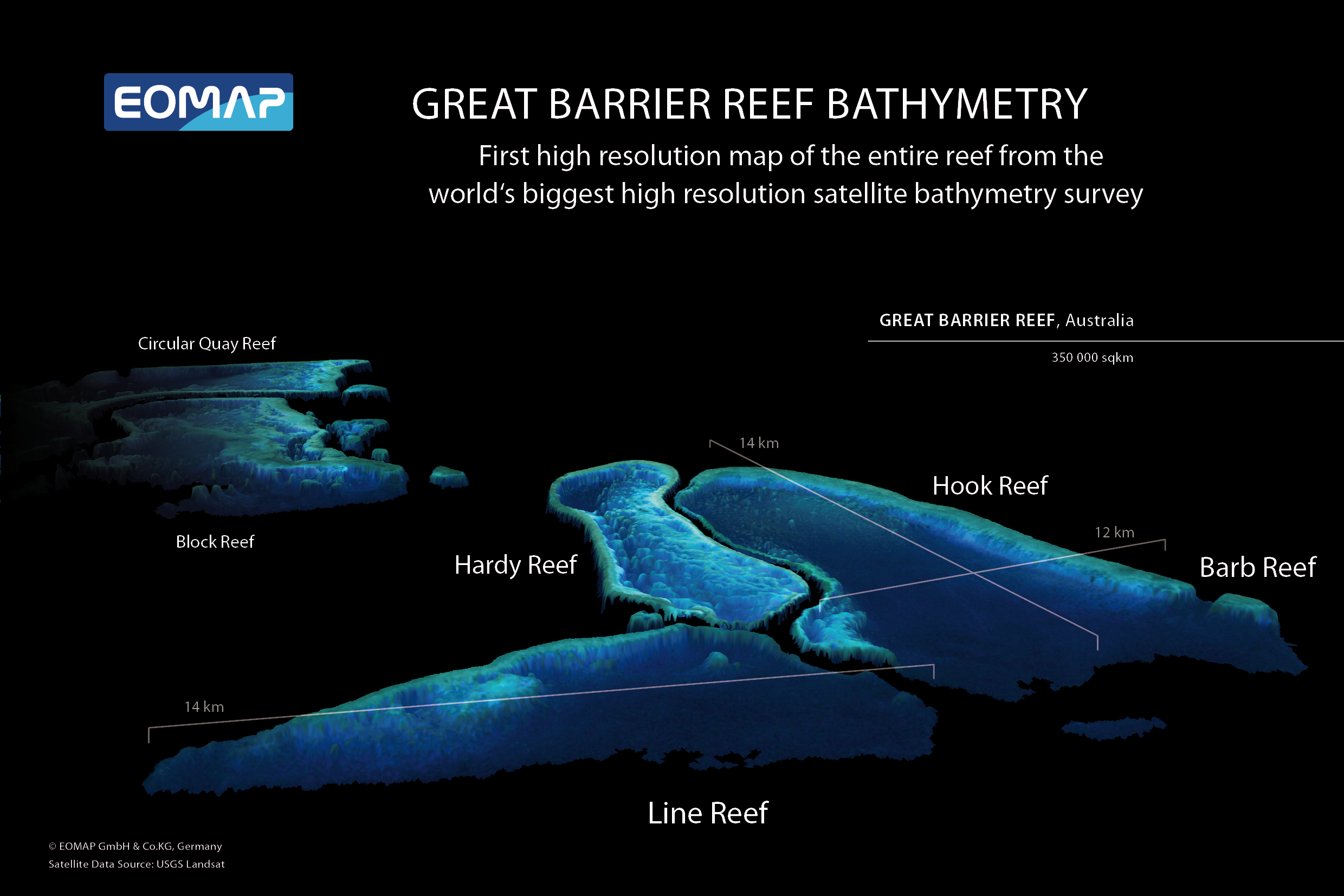 The first high resolution bathymetry of the Great Barrier Reef reveals a complete overview of the entire ecosystem and at the same time the subaqueous topography of the single reefs at a horizontal resolution of 30m. Source: EOMAP

I was recently invited to a Germany-based company that is specialized in aquatic remote sensing and just announced the finalisation of a large scale ocean mapping project, unique of its kind. I am talking about the launch of a set of high resolution maps showing the sub aqueous topography of the entire Great Barrier Reef. The collection constitutes the first digital dataset of the world’s vastest coral reef using satellite derived depth (bathymetry). Bathymetry refers to the remotely mapping of water depth using satellite information and is practicable down to a certain water depth, mostly shallow waters of 10 – 12m depending on the clearness of the ocean. 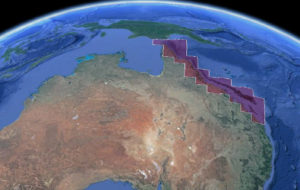 The world’s largest coral reef extends over 2000km along the East coast of Australia.

Till day the ecologically sls is costly and also navigationally dangerous due to the shallow nature of the reef lagoons. In order to overcome such problems EOMAP Company decided to use satellite imagery and developed algorithms to retrieve water depth. In November this yearignificant coral banks of Great Barrier Reef have been surveyed on a digital basis to only less than a half of their extent. Mapping water depth by means of vesse the mapping of the Barrier Reef World Heritage covering an area of around 350.000km² at a spatial resolution of 30m was finalised. The default product relies on LANDSAT 7 satellite data, higher resolution maps applying WorldView2 satellite data with a 2m horizontal resolution can be delivered on request and a downscaled version of 500m (MODIS) is available for free. The vertical bathymetry accuracy is 10cm up to a depth of 12m when accuracy begins to diminish greatly. The dataset provides both a detailed view on the single reefs but also a complete perception of the entire coral ecosystem, according to the Australian project partners at James Cook University the largest mission of its kind in Australia.

Besides exploring water depth and sea floor EOMAP also keeps know how in assessing water quality parameters such as turbidity, total suspended matter, content of chlorophyll and yellow substances (suspended organic matter). The idea of Dr. Heege, CEO of EOMAP, is to regularly create and offer an updated version of the respective products for Europe. Other regions are scanned on request. The maps will be highly beneficial for monitoring water quality and estimate its responses to man-made and natural impacts such as cyclones, climate change, sea level rise and sediment transportation.

Earth observation satellites measure the characteristics of light or radiance coming from an object of interest. All influences in between the earth’s surface and the satellite affect the energy that is recorded by the sensor requiring radiometric corrections. While land classification based on satellite imagery involves the correction of atmospheric influences, water depth assessment additionally implies the correction of sun effects on the water’s surface (sun glitter, angle, adjacency along the coasts) and the consideration of the water column itself (phytoplankton, sediments, suspended matter). For a final interpretation the applied algorithms distinguish between four types of seabed that entail a different colour (sand, rock/debris, vegetation and mixed seafloor (mainly vegetation). After that, the calculated radiance of the pure water column can be referred to a certain water depth.

Particularly the introduction of the coastal blue band beginning at 400nm has made satellite derived bathymetry (SDB) a robust technology since some water properties are discriminable within this spectral range. SDB allows to rapidly surveying remote, extensive or inaccessible areas at 5 – 10 times reduced costs compared to the traditional shipping methods. Particularly in shallow areas that are typical for all coral reefs the accessibility for vessels is challenging or even dangerous. The bathymetry and water quality maps as presented by EOMAP are very useful for obtaining an overview of a desired area and for deciding where more accurate data, for instance in-situ data is required. This information is essential for environmental monitoring, coastal engineering or reef management. The planned automatisation of the calculation process allows a repetition at a certain time interval producing a time series that is going to enable long-term observations. However, due to the limited accuracy the mentioned maps are not recommended for applications requiring nautical grade precision.

The algorithms to retrieve water depth and quality are also applicable to sweet water bodies as lakes or rivers. In this regard, a huge advantage lies in the standardized method of multi-sensor monitoring that produces a reliable, repeatable and harmonized product for a potentially large area. If we think of Germany for instance, every federal region uses different methods to measure and monitor water quality. Thus, the results are not consistent among themselves. On a national (large scale) level, a standardized product therefore represents the huge advantage of comparability. 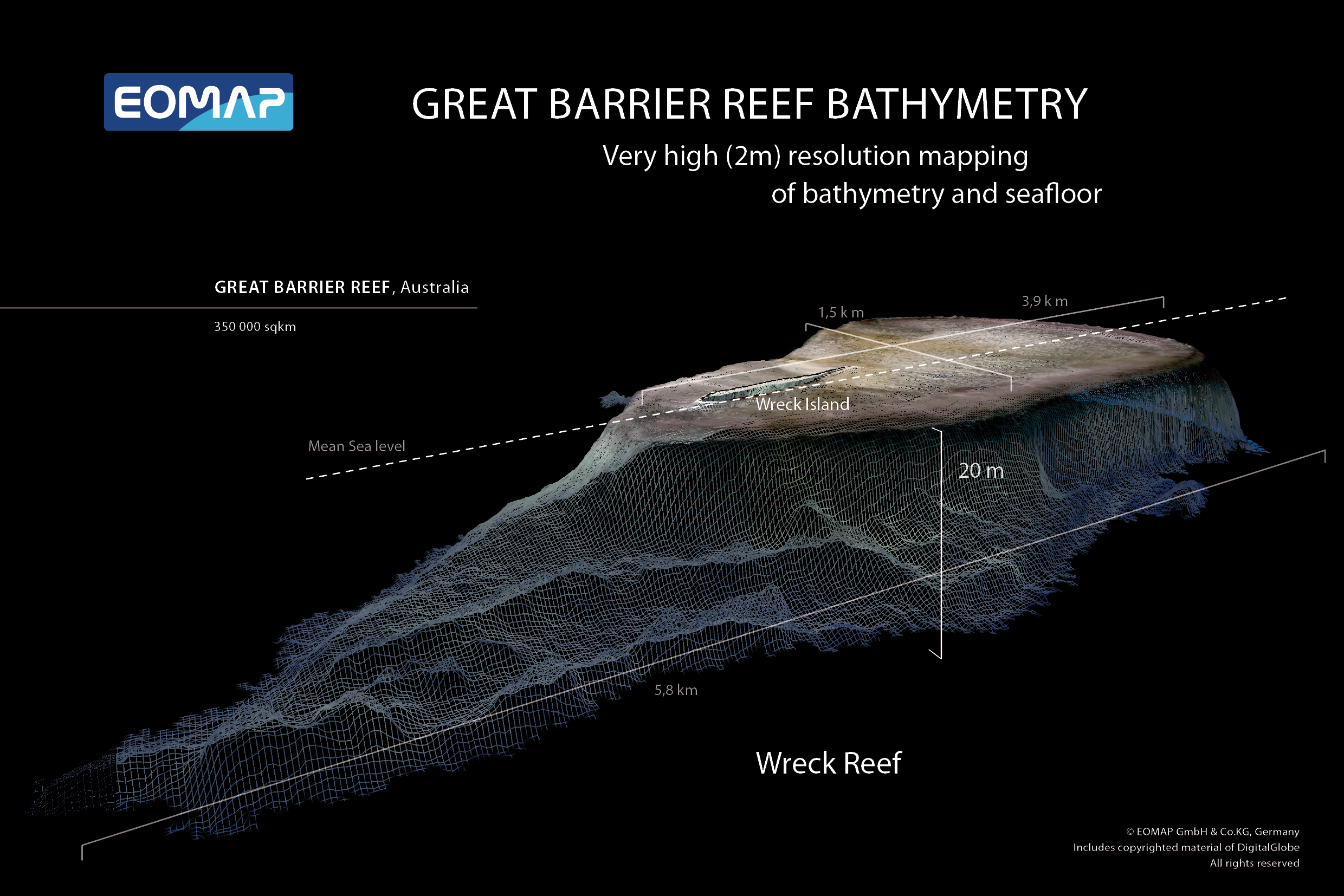 Very high resolution bathymetry maps from the Great Barrier Reef as well as other location in the world are produced on demand. Source: EOMAP 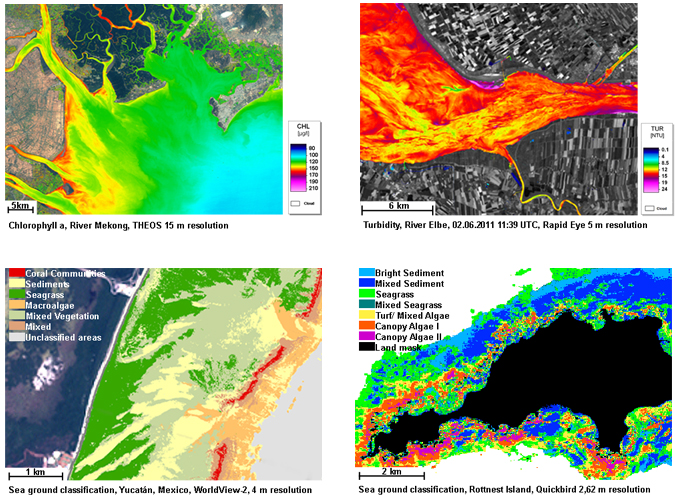 With the idea of “Operational Satellite-Derived Bathymetry Service – Rapid, spatial, validated” EOMAP was awarded the Copernicus Master for cloud computing challenge in November 2013.

New high resolution mosaic from the Arctic and Antarctic

There is new notice from the sixth and ‘seventh’ continent: The Polar Geospatial Center (PCG) at University of Minnesota has accomplished a high resolution mosaic from the Arctic and Antarctic showing the poles at an unprecedented detail. Since the launch of the LANDSAT mosaic of Antarctica six years ago (LIMA), which employed the panchromatic mode on a sub-pixel level for achieving a resolution of 15m, the latest product has a never seen horizontal resolution of around half a meter applying imagery of commercial satellites such as WorldView-1, WorldView-2, QuickBird-2 and GeoEye-1.

One of the biggest challenges was to cope with the high number of images, over 30000, from different companies requiring the correction for the orientation and the automatisation of ‘orthorectification’, in order to obtain one single mosaic. The images are implemented in web-based mapping applications of the National Science Foundation for viewing high-resolution, commercial satellite imagery mosaics of the polar regions. Since the launch of the new bedrock topography of Antarctica ‘bedmap2’ in spring this year it’s the second important remote sensing achievement within short time.

According to PCG director Paul Morin those images reveal every penguin colony and every glacier crevasse. PCG Imagery Viewers are accessible to any researchers who have US federal funding. The imagery is licensed for federal government use and is not available to the general public. Other requests involve specific requirements and will be linked to a certain purpose and date. In general, the benefit goes to scientific and governmental activities.

The new imagery collection obviously will be beneficial for science such as climate research and glacier studies. As the spatial resolution permits to even detect penguin colonies, ecological research will also profit from the images as for instance the number of animal groups can be counted better than ever before. At this point I want to stress that knowledge extracted from research always implies to be aware of new (political) responsibilities. I am pointing to the soaring interest of adjoining states in Arctic oil reserves and the environmental problems that have to be linked to this topic. Therefore, the new level of information (PCG maps, bedmap2,…), which is going to be beneficial for different questions and parties, needs a strong discussion about the usability and potential consequences of practical applications. 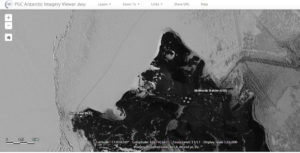 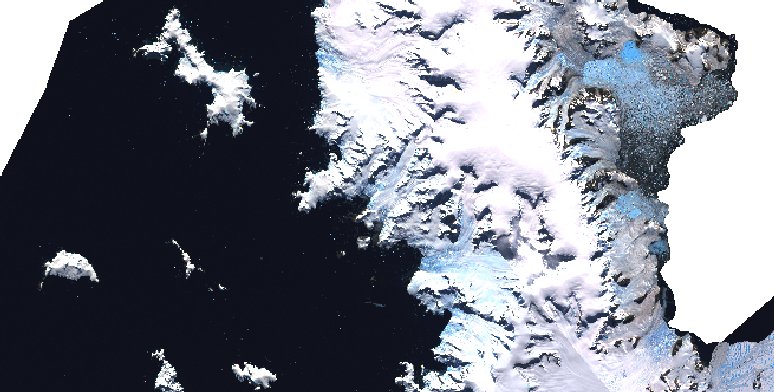 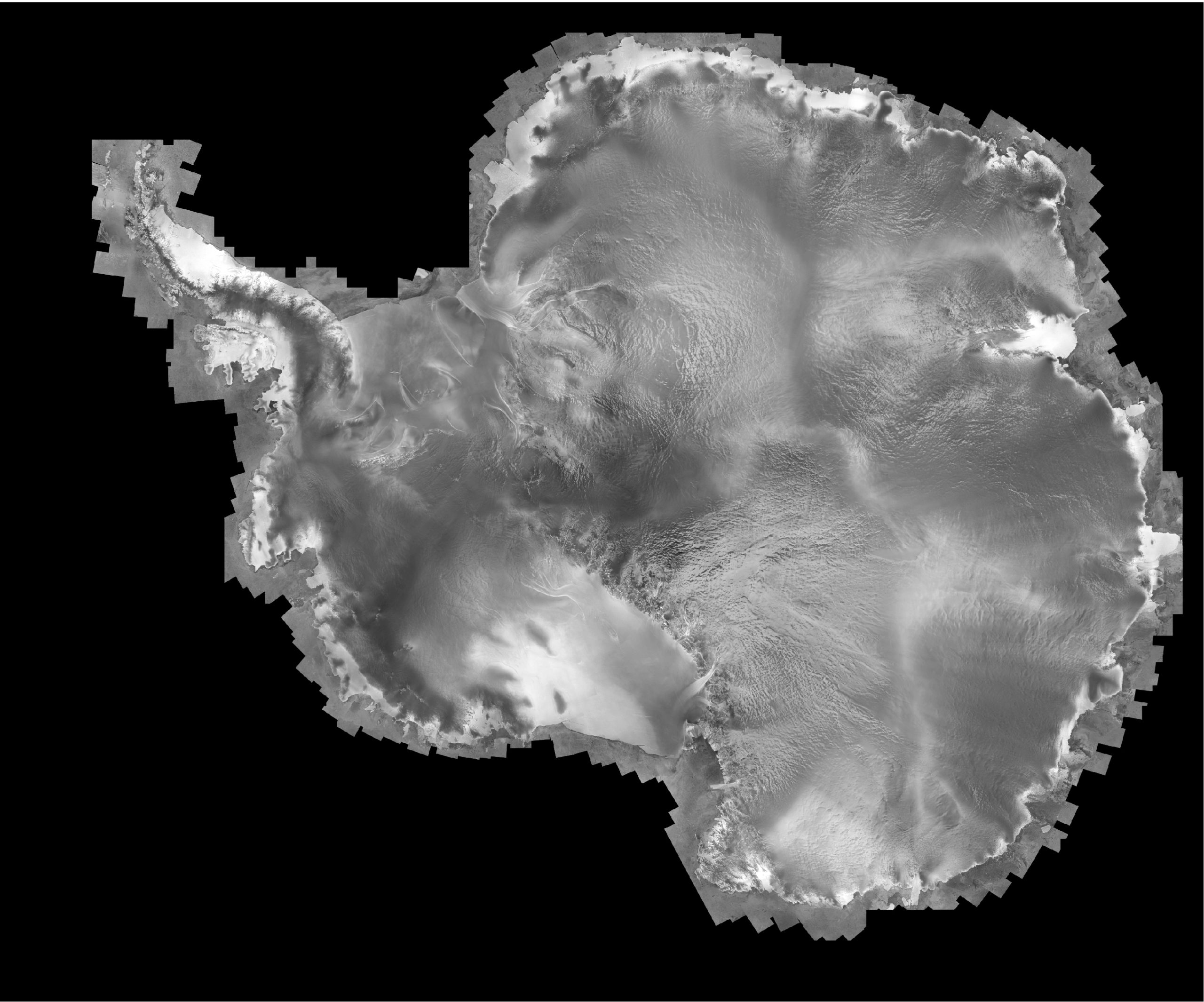 SAR Image from the Antarctic Mapping Mission of RADARSAT-1. The mosaic was coompiled by Byrd polar Research Station. The images were taken in 1997 and have a groudn resolution of 125m. Source: PGC.