Increasing deforestation, Global warming, Floods in India, Canada and Central Europe – all signs that the Earth is getting Industrialized and Gray compared to the Blue and Green that once dominated the planet?

Well, it seems all is not lost. Remote sensing studies using satellite imagery from Suomi National Polar-Orbiting Partnership by NASA and NOAA reveal the greener side of the planet.

The Normalized Difference Vegetation Index values from the study gives a fair idea of droughts, forest fires and other environmental factors that are affecting the vegetation cover.

The amount of greenery that you still see on the surface of the planet is in stark contrast to the grim and gray pictures that we have associated the Earth with over the last couple of years, thanks to extensive “industrialization”. The study does not really say that the earth has become greener by any stretch of imagination and it would be wrong to assume that but it’s still nice to see the amount of greener thriving on the planet.

Earth is still a “green and blue” planet 🙂 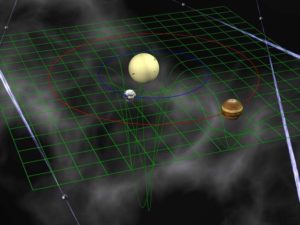 The need for “Global” positioning in Space has been a long standing and tricky issue. To put it simply – Outer Space Navigation is yet to replicate the success and confidence GPS/GNSS has had when it comes to Global Navigation on Earth. Well, at least the Star Trek needs this 😉

I have always wondered how they keep tabs on a spacecraft bound for Saturn or even moon where our GPS/GNSS does not exist. The usual method revolves around radio waves – a spacecraft’s distance from the control station is computed using radio waves which I understand is accurate to within a meter.

When it comes to Outer Space positioning, its more about getting the Angular position correct than the radial distance. Current technology has the ability to track angular position with an uncertainty of about 4 Kilometers/astronomical unit of distance between the spacecraft and earth. That’s about 500 Kilometers if your spacecraft is near pluto. Not bad you might think – but surely scientists would be happier to have a better way of determining the spacecraft’s outer space position.

Thats where Pulsar Signals come into the picture.

The basic idea behind this interplanetary navigation system is to use the signals from these pulsars in essentially the same way that we use GPS satellites to navigate on Earth. By measuring the arrival time of pulses from at least three different pulsars and comparing this with their predicted arrival time, it is possible to work out a position in three-dimensional space. (Since pulsars produce a stream of identical pulses, it is possible to generate any number of ambiguous solutions when doing this. But Becker and co point out that these can be eliminated by constraining the solutions to a finite volume around the assumed position.)

The man behind the idea Werner Becker,  Max-Planck Institute for extraterrestrial Physics in Germany and his colleagues have said that this technology can help locate the spacecraft within a five kilometer radius.

The feasibility of such a system depends on a number of important practical factors, largely determined by the wavelength of the pulsar radiation that the navigation system is designed to detect. This determines the antenna collecting area, the power consumption, the weight of the navigation system, and of course its cost. Becker and co calculate that for 21-centimeter waves, the spacecraft would require an antenna with a collecting area of 150 square meters. But a better idea, they say, is to use pulsars that emit x-rays since the technology for collecting and focusing x-rays has improved dramatically in recent years. SOURCE: Technology Review

The research”Autonomous Spacecraft Navigation with Pulsars” had been published in MIT Technology Review last month.

Taking Navigation to Infinity and Beyond 😉