At some point in time, most of us in the geospatial industry have used Earth Observation technology and remote imagery to track changes on the Earth’s surface. Common applications include environmental monitoring, meteorology, and cartography. Some of you may have used it in the past and been fascinated by it but do not actively use it now. Others actively use Earth Observation in your day-to-day work or research.

If you are a part of the industry, you must have come across two Earth Observation programs: Landsat and Sentinel. The Landsat program, operated by the National Aeronautics and Space Administration (NASA), has been continuously imaging the surface of our planet since 1972. What turned the industry upside down was a bold move to open up the entire archive of the program to the general public in 2008. Back then, it felt incredible that all this data was not kept under lock and key anymore. It was one of the major triggers that influenced the beginning of the new space economy. 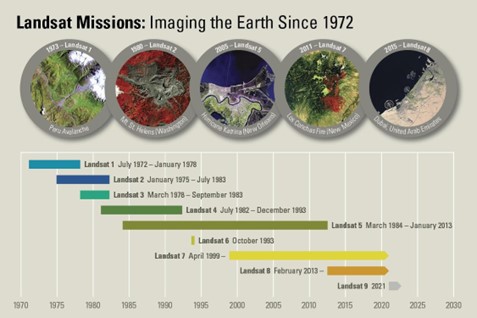 If you’d like to hear about the origins of the 2008 policy change by someone who was instrumental in securing it’s execution, check out this podcast by Minds Behind Maps: Barbara Ryan – How Landsat Became Free & Open – MBM #21.

It also paved the way for the European Space Agency (ESA), which launched its Sentinel program back in 2014.  The most widely known and used open-source dataset is procured by the Sentinel-2 satellite constellation, which comprises two polar-orbiting satellites with 10m spatial resolution. However, these are only two satellites in a family of many others.

NASA, ESA, Landsat, Sentinel, and the Power of Collaboration

Both Landsat and Sentinel datasets are similar in nature, but have enough differences to complement each other given the right circumstances. They are also both available to the geospatial community via various platforms and marketplaces such as UP42 among others.

Interestingly, the fact that these two programs complement each other is by design rather than by accident. In fact, NASA and ESA are closely collaborating on a number of efforts and initiatives that enhance Earth Observation and benefit humanity. These efforts are a great example of how we are better when we work together and share information than when we isolate and keep the power of data to ourselves.

For example, each dataset consists of bands of the radiometric spectrum that capture a range of wavelengths. There is a significant overlap in the two datasets. When harmonized together, the overlap allows for better atmospheric correction and presents more accurate data. 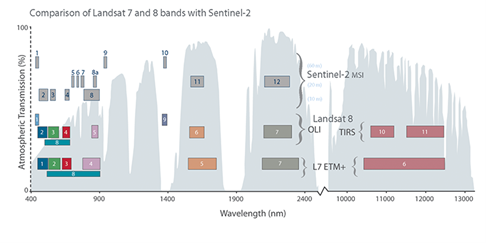 For the purposes of the Harmonized Landsat Sentinel-2 Dataset, the products are gridded to the same resolution and Military Grid Reference System (MGRS) tiling which allows for stackable time series analysis. For a more academic overview of the dataset, see this link. 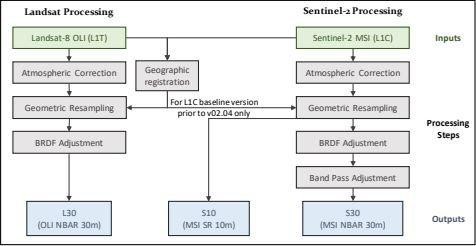 This collaborative effort provides updated data on a more frequent basis, the combined product is more accurate, and it is freely available to all via NASA’a EarthData website. Government agencies, private entities, academia, and the general public all benefit from this. 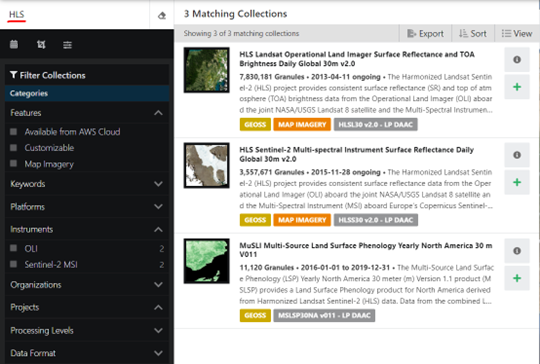 This dataset is ongoing. With the launch of Landsat 9 on September 27, 2021 and the launch of Sentinel-6 on November 21, 2021, more of these types of opportunities present themselves. With enough visibility and support from the community, we can communicate how valuable this is to us.

Although a shorter mission, the CryoSat-2/IceSat-2 Resonance Campaign, dubbed #CRYO2ICE, is another impactful representation of the collaborative effort between ESA and NASA. CRY2ICE was a 2-week mission that occurred between 16-31 July 2020. The goal was to temporarily synchronize the orbits of NASA’s ICESat-2 and ESA’s CryoSat-2 satellites to gather radar and LiDAR measurements of the same ice at the same time. The CryoSat-2 and ICESat-2 satellites passed over coincident polar areas at approximately the same time over 19 orbits that occurred roughly every 31 hours.

This provided scientists with a more accurate measurement of sea ice thickness measurements and ice-sheet elevation time series than had been done before. Tommaso Parrinell, Cryosat Mission Manager, commented: “The scientific benefits such a small orbit change for CryoSat will bring are impressive. By using the combined data from CryoSat-2’s radar and ICESat-2’s laser instruments, for the first time, we will be able to reduce inaccuracies in sea ice thickness and land ice measurements. It will enable us to map snow at the poles and could help us, among other aspects, to measure sea ice in summer and improve climate models.”

Fascinating on a technical level, the synchronization was accomplished by increasing the ESA CryoSat-2’s semi-major axis by 887 meters through a series of 14 maneuvers.

On November 21, 2020, the Sentinel-6 Michael Freilich satellite launched from Vandenburg Air Force Base in California. This effort is part of a strategic partnership between NASA and ESA to observe earth and its changing environment. The primary goal is to measure the height of the ocean to better understand how Earth’s climate is changing. A secondary goal will be to measure the temperature and humidity of the troposphere, the atmospheric layer in which we live.

Five years after the launch of the Sentinel-6 Michael Freilich satellite, an identical satellite called the Jason CS is set to launch and provide observations up to 2030.

An effort such as this only comes to fruition with the combined forces of several entities. NASA and ESA are not the only ones involved. Other organizations that are actively involved or supporting the mission are the National Oceanic and Atmospheric Administration (NOAA), the European Organization for the Exploitation of Meteorological Satellites (Eumetsat), the European Commission, and France’s Space Agency, the Centre National d’Etudes Spatiales.

The Sentinel-6 and subsequent launch of the Jason CS satellites are set to provide measurements until 2030. Some notable technological improvements provided by the Sentinel-6 satellite are the inclusion of synthetic aperture radar into the altimetry reference mission time series and an advanced microwave radiometer provided by NASA. These will yield high-resolution along-track measurements and more accurate sea-surface height measurements, respectively.

Visions of a Unified Future in Earth Observation

The collaboration of NASA and ESA represents a great moment in history that will define how we as humans approach each other and the future moving forward. Not only can launches happen more frequently and successfully, but this also demonstrates the world coming together as a more unified whole. The cooperation between such high-profile organizations incorporates a new level of transparency to tackle the difficult issues of our day such as climate change.

A bit of healthy competition is good, but collaboration can be just as powerful, if not more. When different minds come together, remarkable things can happen. The ability to get a fresh dataset every 2-3 days with the Harmonized Landsat Sentinel-2 data and more accurately measure sea ice thickness with CRY2OICE are notable examples of these impacts.

Today, we have many stories of space technology making a positive impact on the lives of all of us. What are your thoughts on the collaborative efforts with Earth Observation technology? NASA and ESA are just a highlight, but there are many more organizations and collaborative space programs out there. Can reaching the stars bring us closer together? Please share your comments below.

Say thanks for this article (4)
Michael Ivison
3 posts
Want to be an author?

For those who work in Earth Observation, satellite data is most familiar in archival form. This is how we have worked in the past; accessing data a few years or, with enough luck, maybe just a few months old. The typical applications for civilian satellite data use have always assumed the use of archive data. Only a handful of research projects could afford to buy newer data or, in rare cases, on-demand imagery.

On the other hand, popular culture is full of spy movies featuring scenes where MI6 are studying near-real-time satellite images of villains on the other side of the world carrying out nefarious acts—images obtained just a few hours previously. All these films show very high-resolution satellite data captured using optical sensors that were pointed on specific Areas of Interest, at a specific angle, and at the perfect time.

Today, we know this technology by the name of satellite tasking—and it’s now available to every one of us. 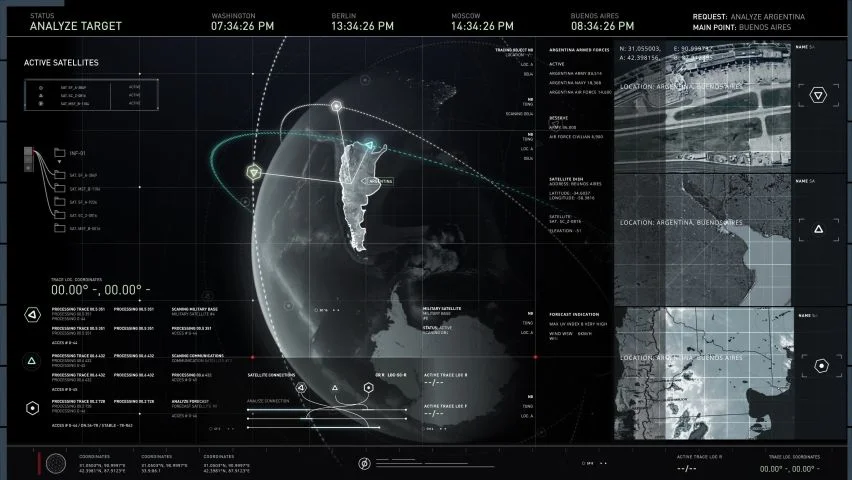 To learn more about satellite tasking, and to help me address some of the important questions in the sector, I recently spoke to Seulgi Son, Satellite Tasking Support Engineer at UP42.