The usage of three-dimensional printers has become a mainstay in the independent production of products. However, these printers could also become the quintessential educational tool.

While geography and history teachers have many methods of teaching at their disposal, the ability to present a landscape in a physical format is far more conducive to the style of tactile learners.

By extension, adding even simplistic examples of three-dimensional printing to a class curriculum gives greater opportunity for more learning styles to succeed, and allows students with vision impairment or blindness a greater opportunity to engage with the course content, especially when teaching a very visual concept like ArcMap.

At present, most public schools don’t receive the funding necessary to include this type of technology. However, by utilizing the advent of personal three-dimensional printing, it’s possible to create basic recreations of topographic structures to improve learning in the classroom. There are feasible and independent methods educators could utilize to incorporate this technology for their students, even if to a lesser extent.

The process of creating topographic renderings and converting them into a miniature three dimensional model is relatively simple. Teaching this process can be done in tandem with instruction on how to import DEM files into ArcMap. 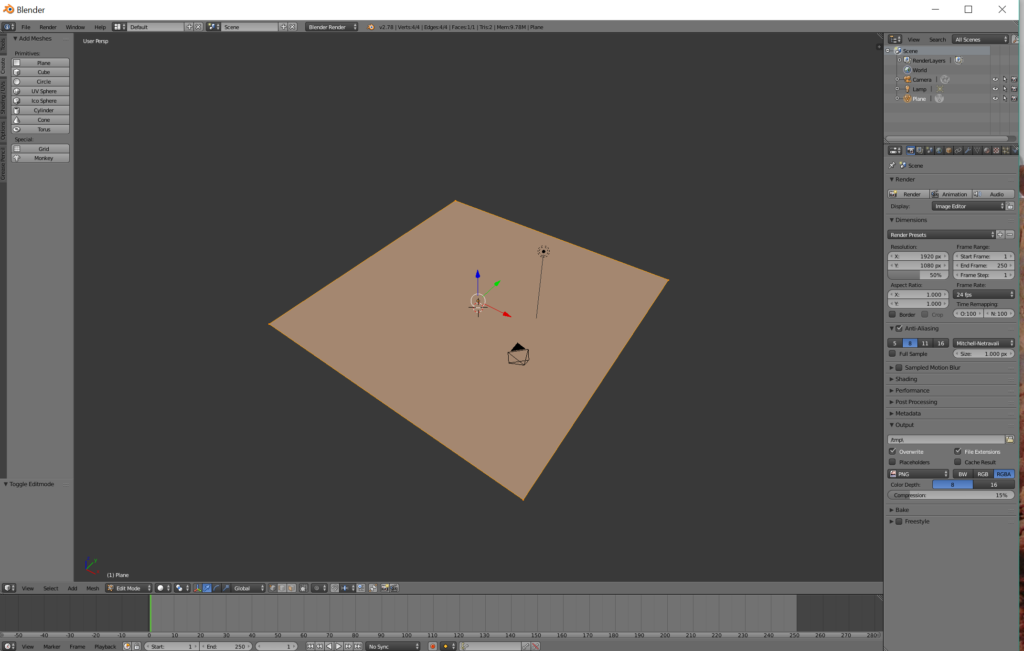 Hand creating these environments requires an open source software, of which I found Blender to be the easiest and most versatile. By using this program, students can reference DEM data to recreate basic imagery of a wide variety of landscapes.

Learning how to use Blender requires very little technical knowledge, and most of what’s needed to learn can be found through their current User Manual, which details the vast amount of functions this software can perform. In simplistic terms, selecting vertices and extending or reducing them and their variant ranges are the primary functions.

Taking a basic plane and splitting the face into several vertices allows the user to manipulate the rendering by any number of points. By selecting individual vertices, it’s possible to change the standard shape into an environment with a variety of detail.

Utilizing Blender, a great variety of landscapes can be modeled, from mountainous landscapes to deep sea trenches.

This methodology could also be applied as a task in the classroom. Having students attempt to recreate environments could bring about a greater grasp on spatial concepts for those who may have trouble visualizing in a three dimensional plane.

Once completed, these models can be exported in .wav or .obj formats and printed through sites such as Thingiverse or Pinshape.

While this is a relatively simplistic method, I’ve found it entirely feasible to conduct in the context of college or public school classrooms.

Say thanks for this article (2)
Olivia Harne
8 posts
Want to be an author?
The community is supported by:

New Google Earth will be released next week

Google Earth is one the best mapping tools ever. It democratized the mapping industry and made millions of people around the world spatially aware. It has been used by urban planners, archaeologists, and the tourism industry. It made the whole world accessible with a click of a button. Exploring our planet started to be easy like never before.

Although it has been largely cannibalized by Maps, many people including me still use it, especially the Pro version which is also available for free. It’s the fastest way to browse ShapeFiles and KMLs, and The Timelapse feature is simply amazing. Unfortunately, the user interface remembers the past decade, and it feels a bit old-school.

Next week it’s all about to change. Yesterday Google sent out press invites to attend an event, where the company will reveal the “new Google Earth.” The event is planned on April 18th, 8:30 AM ET at New York’s Whitney Museum of Art. We expect to see a new user interface, integration with other Maps services and support for more VR headsets as currently, the app is only available for HTC Vive. The event is also interesting in the context that recently Google made Google Earth Enterprise open source…

The Google Earth predecessor has been initially launched by the company called Keyhole back in 2001 (and interestingly it has been financed by CIA). In 2004 the company has been acquired by Google, and its founders including John Hanke (founder of Pokemon Go), and Brian McClendon have been leading the Google Maps for almost a decade.

I’m really glad to see that the company did not ditch the Earth project, even if it’s not the most profitable one. For me and many other people, it was and still is, a game changer app.