How drones help to fight against wildlife crime in Africa? 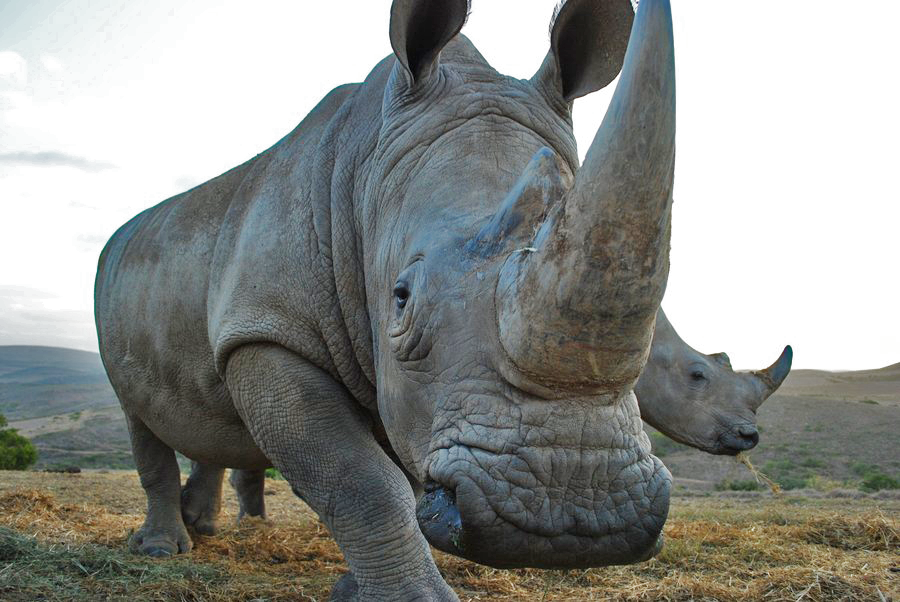 Poaching is a deadly crime against wildlife. Illegal hunters kill tens of millions of animals every year. According to UCLA horns and ivory are more valuable than cocaine or even gold, so poaching is clearly a lucrative business on the black market. The numbers are staggeringly high. Last year, 1,175 rhinos were poached, and its population is down 97.6% since 1960. Up to 35,000 African elephants were killed in 2015. Researchers estimate that, at current poaching pace, African rhinos will be extinct in 20, and elephants will be gone in 10 years. Other animals are also at a great risk of extinction. In fact Lion already extinct in seven african countries. There are approximately 2,000 Grevy’s Zebras and fewer than 900 Mountain Gorilla left alive.

How to use technologies of the XXI century to fight agains wildlife crime?

The answer is simple: drones! The idea to use drones in anti-poaching is not unique. Multiple test have been conducted in South Africa and Kenya but until recently the high-tech UVA technology has been reserved mainly to military purposes and military technology comes with a price tag and some governments are nervous about allowing its unrestricted use within their airspace.

With the recent development of hobbyist’s and commercial non-military drones, the technology got much cheaper and easier to operate. First wide-scale tests of non-military UVAs started in Olifants West Nature Reserve in South Africa back in 2013 and were followed by another projects. One the them called AREND (that stands for Aircraft for Rhino and ENvironmental Defense) has been launched in 2014 as a student research project established by 4 universities from the US, South Africa, Finland and France. Another trials have been performed in Kenya in 2014 as a cooperation of Airware – a California-based drone company and Ol Pejeta Conservancy.

Also the Kruger National Park – the largest South African wildlife reserve has been testing surveillance drones to stop people from illegally slaughtering rhinos and elephants. Last year the park has intensified actions and partnered with several organisation to introduce a program called Air Shepherd that aimed to deploy UVAs to popular poaching areas. Last year the project had run an Indiegogo crowdfunding campaign. Although the program didn’t reach its final goal of $0.5m, it raised $325,818 from people all around the world.

The tests showed that the program can be a large success. Not only drones have recorded poachers in the act, but also it prevents poachers from going to a particular areas. Because individuals including park rangers, staff, and villagers are aware of when the drones fly, the network of individuals who may tip poachers will tell them to avoid the area. 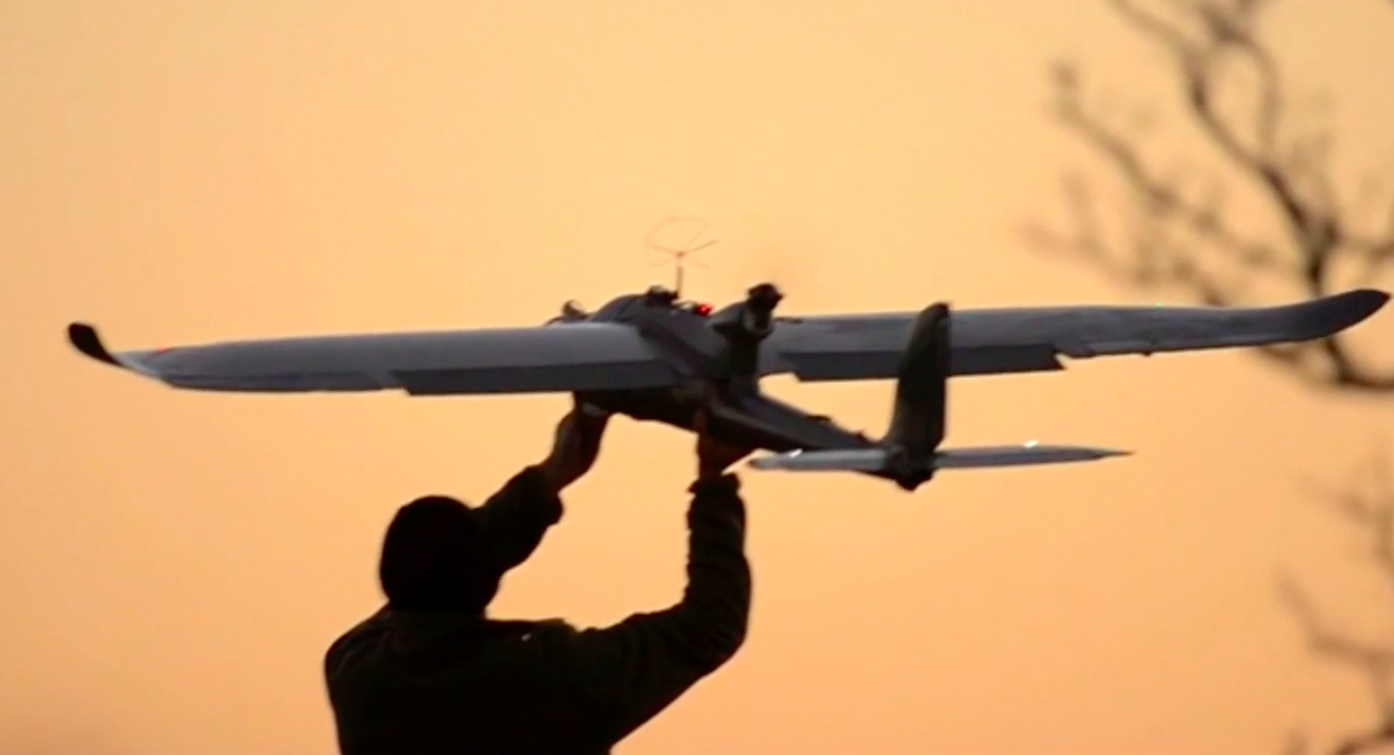 In March 2016 another 12-months long pilot started as a part if the Air Shepherd project where South African drone company UVA and Drone Solutions will be evaluating the effectiveness of drones in the fight against wildlife crime.

One thing is sure: drones have proved useful in anti-poaching activities. Still there are some significant limitations that make the technology staying in “the pilot phase” for couple of years. On one hand the technology is still expensive, requires skilled operators as well as effective coordination with the ground forces. On the other hand local unstable governments fear that drones might be misused which have led to bans in certain areas. In 2015 Kenya and Namibia banned the use of drones over national parks.

Drone technology is likely to play a significant role in the fight against wildlife crime in Africa. But it will be effective only as part of an integrated, ground-to-air tracking and surveillance system.

#GeoChat with what3words: Addressing the world

Here’s the entire post in 3 words – GeoChat.Geoawesomeness.what3words! Hmm, okay maybe we need to explain a bit more than that 😉 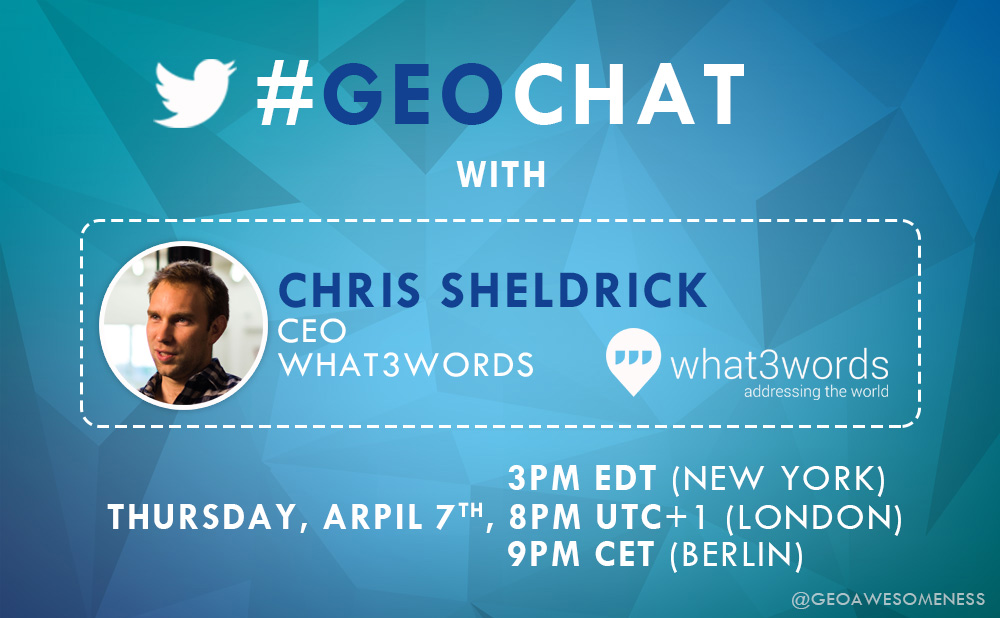 Join us for our second #GeoChat with Chris, CEO of what3words, the startup that is literally changing the way world uses addresses.

Poor addressing is costly & frustrating in many countries, and  around the world it hampers the growth and development of entire nations. what3words is a multi-award winning system looking to change that and have addressed every 3mx3m square on the entire planet with just 3 words. – what3words

Geoawesomeness has always been and is, all about sharing our passion and craziness for everything location and the #geochat is our attempt to broadcast our conversations with the coolest names in the geo-industry and get you, our readers involved in them, so get ready to tweet whatever questions you have about what3words and their work during the hour long #GeoChat on April 7th 19.00 UTC.

Since its an Q&A, we wanted to know (via Twitter of course), what would best day for you GeoGeek and it turns out thursday is the best way forward, at least for the moment.

What would be the best day for you #Geogeeks to tune in our Twitter Q&A #GeoChat. The 1st was on a Monday (8pm UTC) 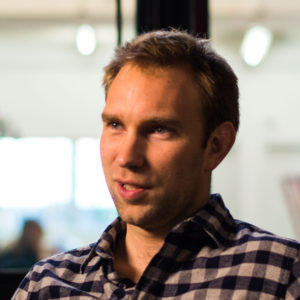 Chris worked in the music business for 10 years, booking bands and managing production for events around the globe. Chris was constantly frustrated with suppliers not finding site entrances, and bands not finding their way from the hotel to their gigs. He tried distributing addresses and GPS co-ordinates for years but both failed him on numerous occasions – he was certain there was a better way: what3words was born.