How Drones are being used in Disaster Management?

1.2 million deaths. 2.9 billion people affected. $1.7 trillion in damages. According to data from the United Nations Office for Disaster Risk Reduction, these staggering figures are the total economic and human impact of global disasters from 2002 to 2012. With a steady growth in annual disasters, especially climate-related ones, emergency management strategies are being put under the microscope. Disaster management technologies, on the other hand, have seen some remarkable breakthroughs in the past decade. 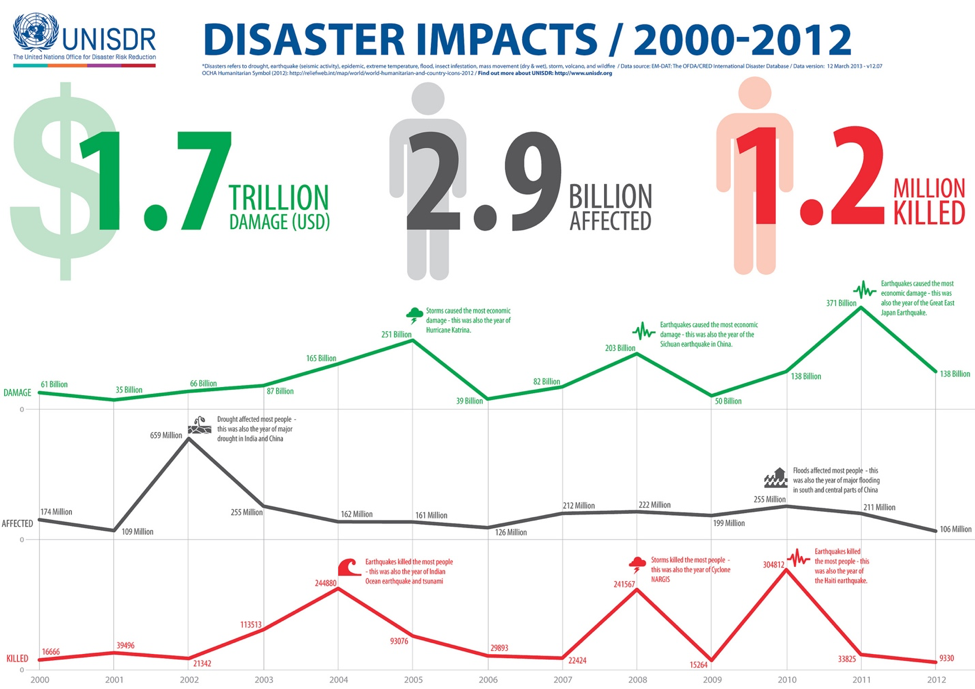 Many technological breakthroughs in recent years have emerged in places areas where it was least expected. Unmanned aerial systems, for example, have transitioned from highly defense-focused applications to a multitude of commercial use cases that transcend industries. But what makes UAS, more commonly referred to as drones, fit for emergency response?

As previously discussed, aerial views are critically helpful in large-scale disaster zones. Drones, designed to be agile, fast and robust, empower response teams with a substantial upper hand without costing as much as manned flight operations. Because many are autonomously flown, drones can access hard-to-reach areas and perform data-gathering tasks that are otherwise unsafe or impossible for humans. 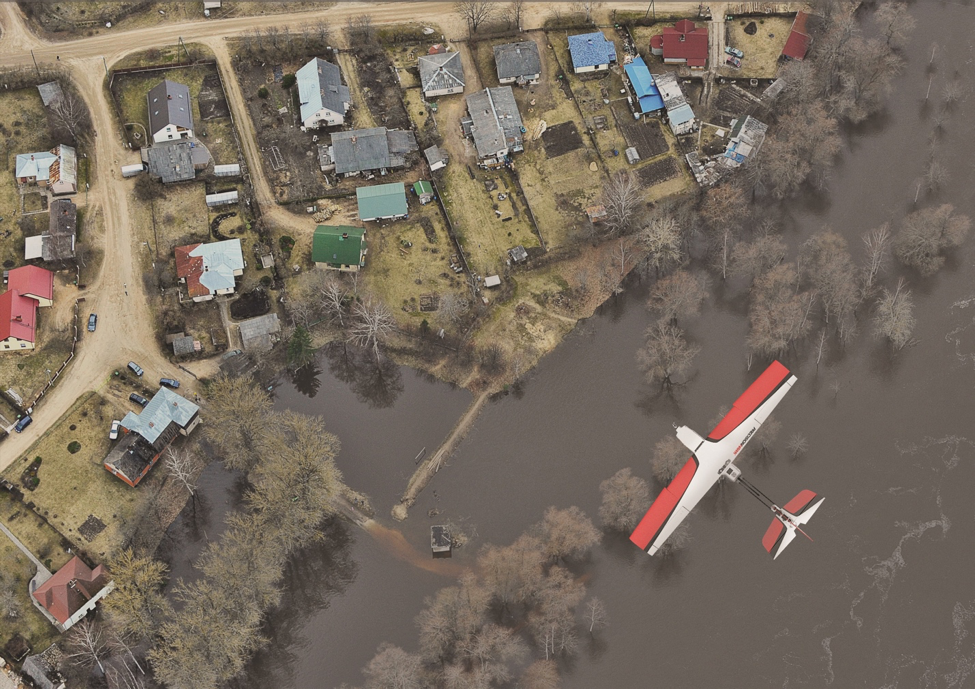 Many disaster management protocols have been tested over the years. While many of these strategies have been successful, they also come with major hurdles. Time is the most important commodity in disaster response. Emergency responders know very well the irreversible consequences of critical delays, so their playbooks are inherently designed to address urgent, high-pressure scenarios. On top of urgency, disaster response faces another major challenge in logistics, as evidenced by the 7.8 magnitude earthquake in Nepal that claimed the lives of 9,000 people and injured 23,000 others.

As debris and rubble piled up on the streets following the biggest natural disaster in the country since 1934, most of the roads were blocked, denying access to outlying areas. In situations like this where land access is off the table, government agencies are forced to deploy manned aircraft to continue immediate search and rescue, and later on, relief efforts. In theory, this sounds like a winner, but resource allocation, especially in poorer countries, poses another major challenge. Search & rescue operations from the air are expensive, and as we’ve seen in the past, these operations can stretch for months, even years. In countries where resources are already scarce, this option is not viable.

Outside of these safety concerns, there’s another major hurdle that is often overlooked: first responder safety. In the case of earthquakes, landslides, hurricanes and wildfires, first responders are deployed immediately in rough and dangerous working conditions. In 2014, a mudslide roared through the rural community of Oso, Washington, destroying over 30 homes and taking the lives of 43 residents. The response team had to move quickly. The risk of another mudslide was looming over them, while the first one dammed the river and flooded the valley, essentially turning the entire disaster zone into quicksand. Given all these uncontrollable elements, it was not safe for the ground crew to investigate the scene. To make things worse, only 30 minutes of clear skies were left for helicopters to conduct an aerial survey – not enough time to gain an accurate account of what was happening on the ground. The team did, however, have a drone. 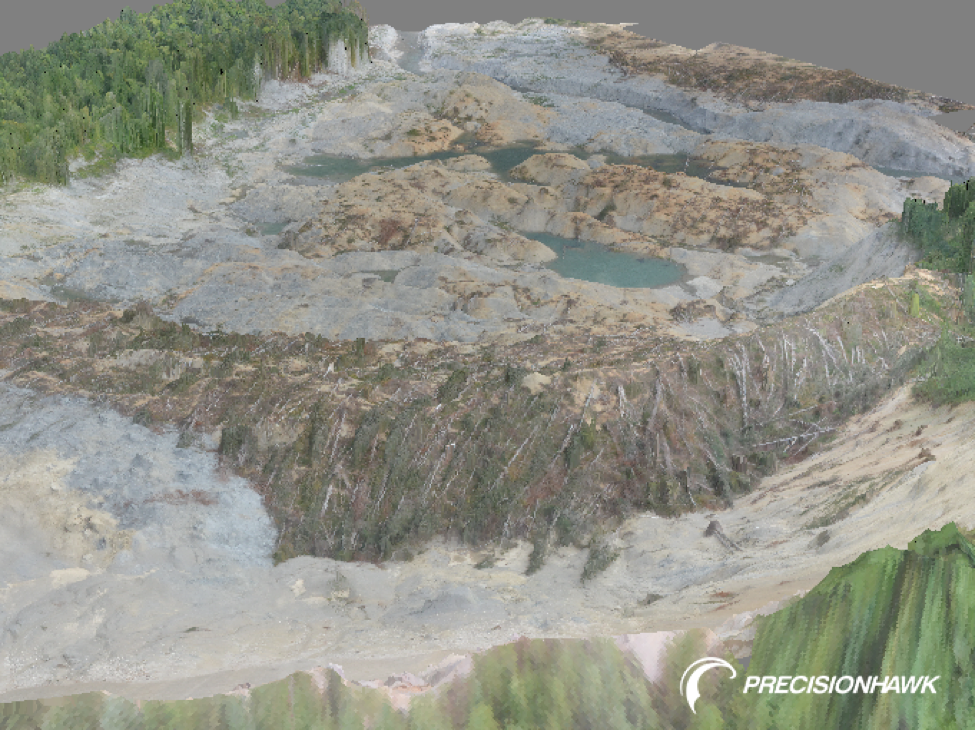 Immediately following the Oso mudslide, PrecisionHawk, an information company out of Raleigh that manufactures a drone for data collection and software for processing and analysis, was called in through involvement with Roboticists Without Borders (RWB) to provide geologists and first-responders with actionable insights. Using their Lancaster UAV platform, PrecisionHawk surveyed the terrain from the air to create an 3D map. RWB’s Dr. Robin Murphy recently told CNN, “[The UAV] acts like a plane. It’s smarter than a plane because it’s got all sorts of onboard electronics to let it do pre-programmed surveys. It takes pictures like on a satellite or a Mars explorer and then pulls those back together into a hyper-accurate map — a 3D reconstruction.”

In Oso, PrecisionHawk used high fidelity sensors and intelligent back-end software to reconstruct and analyze the terrain in 3D — a step that not only helped geologists detect the pace of land movement but also provided first responders the time-sensitive data they needed to safely infiltrate the disaster zone. This all happened in a matter of hours. Historically, emergency response teams used manned LiDAR flights and satellite information to gather such data, actions that are costly and take days to weeks to accomplish.

Beyond economic and logistical advantages, drones currently on the market are often equipped with intelligent flight planning software that allows first responders to easily create highly customizable flight paths that focus on specific areas of interest, leading to organized and focused search efforts.

Additionally, drones are also outfitted with various sensor options that include visual, thermal, LiDAR, hyperspectral and multispectral. Why are these important? In earthquakes and landslides, these sensors can be flown to conduct ground truthing surveys. The thermal sensor, for example, is perfectly suited for detecting the heat a human body emits, which helps locate survivors. Various sensors suites are efficient in obtaining data to create an exact 3D reconstruction of disaster zones, which when compared with historical data from satellites, offers new perspectives on the extent of damage, and terrain or field deviation that could help manage future disasters.

With the advent of UAVs in emergency response, it is important to note that commercial drones operated by professionals and emergency organizations do not offer the same applications as hobby drones recently seen disrupting wildfire containment efforts. Commercial UAV platforms are designed with the on-board intelligence to empower, not deter. In order for drones to become a vital part of emergency management, hobbyists need to avoid irresponsible use cases that overshadow the massive benefits of UAV technology and manufacturers need to continue to in-build tools that promote safety.

Advanced data analytics are the next frontier in leveraging drones for emergency response. One of the advantages of solution-focused algorithms is the ability to apply them across industries from emergency response applications to agriculture to energy, even identifying toxic waster in the air in real-time.

In mid-February last year, PrecisionHawk was issued an emergency COA to conduct an aerial survey over the Bennett Industrial Landfill in Lockhart, South Carolina. Toxic particulates were being released into the air, including asbestos and other potentially harmful chemicals, so it was crucial that the Environmental Protection Agency (EPA) assess the situation quickly. The EPA, however, could not obtain an accurate volumetric survey of the area due to an active fire affecting some sections of the landfills, plus chemical exposures that made the scene unsafe for ground surveyors. To address the situation, PrecisionHawk flew a drone to create a 3D reconstruction of the site and conduct volumetric analysis to help the EPA determine an appropriate response.

The demand and desire for this type of technology to assist in emergency response is apparent as disaster response teams search for strategies to accomplish tasks easier and more efficiently. The convergence and advancement of technologies, including unmanned aerial systems, will grant first responders with enormous opportunities to save more time, money and lives.

Say thanks for this article (1)
Lia Reich
8 posts
Want to be an author?
The community is supported by

Once in a while Google Street View team likes to please us with something cool. This time it is the western Europe’s highest peak – Mont Blanc.

Mont Blanc rises 4,808.73 m (15,777 ft) above sea level and it’s the world’s 11th tallest mountain so you cannot simply take Street View Trekker backpack with 360 cameras to the top. In order to do it Google had to partner with several photographers, skiers, mountaineers, climbers and runners. The effect is the stunning library of 360-degree imagery. There is also a dedicated website where you can explore the Mont Blanc massif from different locations and perspectives.

Users can run up the mountain with Kilian Jornet – who holds the speed record for ascending and descending Mont Blanc, in just 4 hours 57 minutes,

and do some powder skiing with 14-time ski mountaineering champion Laetitia Roux.

Check out the video to the full experience: