Everyone who reads Geoawesomeness know that spatial visualization of data can give you new perspective on your analysis. Map is far much more informative than tables or database records and it provides a quick way to visually analyse complex and voluminous data. Most of you probably knows that it is not easy to make a really good map. When using GIS software first you need to geocode your data, than to add background data (if you have it) or WMS and WFS services (if you don’t have it), than you can perform spatial analysis and finally generate map. Due to the fact that GIS visualization effects are quiet limited (if any) at the end you need to export it to software like Adobe Illustrator and play with it for hours. At the end it looks good but it’s not interactive.

That’s way I’ve been fascinated by Google Earth’s KML (Keyhole Markup Language) for a while. It’s simple way of visualizing data in an awesome way. There are four main reasons why it’s so good. First of all it’s relatively easy to use, just a little bit of XML which shouldn’t be a problem even for an amateur. Second of all, it’s free which means that is free for both: you and your clients. Moreover it allows to visualize your data with Google Earth’s background. And finally it allows for cool interaction between your map and the user.

There are a lot of examples of great visualizations made with KML: 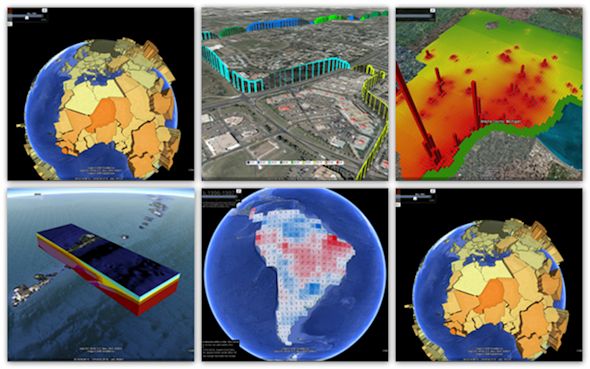 But in order to create visualizations at that level you need to write some code because it’s a little bit too complicated to do it manually. You can find online some simple software to generate basic things automatically but it’s not going to look cool.

Now there is a solution for those who want to create cool, custom visualizations but have never seen nothing like XML. Data Appeal is the first online automatic KML generator with cool customizable features. The project is based on PhD research of its founder Nadia Amoroso and allows you to generate some cool visualizations with just a few clicks of a mouse. Data Appeal position themselves as a GIS software but I would classify them as a the first powerful geo-vizualization software is based on Google Earth. 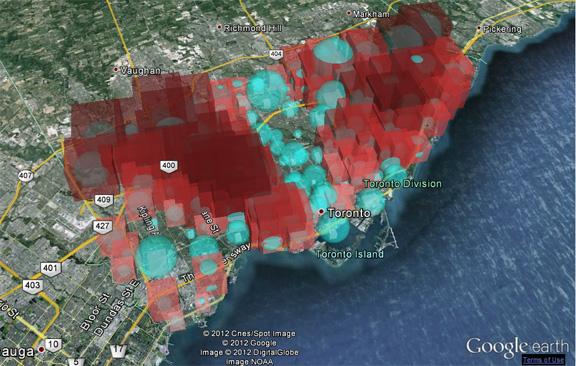 It is really simple. First you have to prepare you data in excel, where you can automatically geocode them if you don’t have coordinates. Than you upload the file and you can move to simple and easy to use creator, where you can change shapes, colours, size, you can add legend and so on. Everything is nicely displayed online, but you can in any time download KML and use it directly on Google Earth. If you’d like you can share it on social media as well.

Check out the video to learn more about Data Appeal:

What you can do with it?

Right now the software is still a little bit limited but guys at Data Appeal told me that they’re working on new features, which they will launch soon. So what can you visualize with it right now? Basically geocoded points with assigned values. Those values are represented in hight and size of the shape that you choose e.g. prism, cone or bubble. With old school theory of cartography this would be considered redundant use of cartographical device, but actually on GE it looks awesome and gives users nice map experience. I like it. Soon they you’ll be able to visualize not only points but as well polygons and create a lot of other cool stuff.

Will it work for you?

I’ve been searching for a good KML generator for a while already, and I guess that Data Appeal is what I was looking for. The value of GE can be big if you know how to use it. When you work with non-GIS people it’s crucial to let them play with solutions they know. And everybody knows and uses Google Maps and Earth. Great job Data Appeal Team and keep on making your software even more awesome! 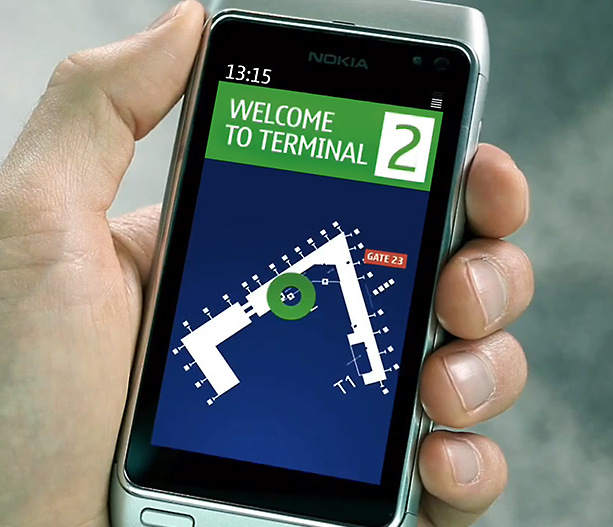 When was the last time you had that frustrating experience in a large supermarket, where you’ve been walking around in circles trying to find a small item? Indoor positioning technologies are one of the most hot topics around Location-Based Services. Every university linked with any kind of geo-stuff is currently working on indoor LBS including mapping, routing or positing.

The basic idea is that we are already pretty good in utilizing location outside, but people are spending more and more time inside buildings like offices, airports, shopping malls or supermarkets. Creating technology that would allow for truly great indoor LBS customer experience will allow to monetize a lot of great ideas including Location-Based Advertising but as well in indoor emergency procedures.

Why it is not there yet?

There are some technological and user adoption issues that need to be solved. The user experience needs to be indeed extraordinary in order for a broad adoption and basically, it’s not there yet. Although indoor positioning already works for example on Google Maps it’s far from being useful. The technology depends on WiFi and there are still no world-wide standards about creating indoor infrastructure and in order to create  them there are so many parties to be involved…

But this is only one side of the problem. In order for the system to work venue owners/managers need to share indoor maps of their venues and giants like Google, Amazon or even Facebook could use it for advertising competitive products in leveraging their indoor location data. I could easily image entering getting text message in Zara store with $20 coupon from Banana Republic.

In order to deal with all those issues and introduce service that could be loved by customers Nokia announced The In-Location Alliance. It includes 22 companies across industries: phone makers such as Nokia, Samsung and Sony, chipset manufacturers such as Qualcomm, Broadcom, CSR, Dialog semiconductor, Nordic Semiconductor, indoor location pure players such as Insiteo and Visioglobe, and other companies linked to this market. Their mission is to “drive innovation and market adoption of high accuracy indoor positioning and related services“ according Nokia’s press release.

Who and why is not there?

But there are some notable exceptions in the alliance: Google, Apple or Amazon are not part of it. And I guess I know why: Nokia is in charge. First of all they’ve announced the alliance second of all Nokia’s HAIP ( High Accuracy Indoor Positioning Solution) will be the leading technology. It’s based on Bluetooth 4.0 and it has a minimal power consumption, which giving Google hard time.

Whenever big companies are joining to create something good, creating some alternative to Google Maps domination it will be good for end-user, so for all of us. Congrats to Nokia for making such a huge brands working together on something.