How map-driven stories can grab attention and influence international policy

The running joke in Washington is that think-tanks produce 200-page paperweights that sit on a congressperson’s desk, never to be read.

But the Center for Strategic and International Studies (CSIS) is different. Ranked #1 think-tank in the United States by the University of Pennsylvania’s ‘Global Go To Think Tank Index’, CSIS’s exhaustive reports are complemented by gripping map-based products, such as video stories and interactive geographic data visualizations.

In 2015, CSIS changed the global conversation on geopolitics by releasing the first declassified photos of China’s clandestine military bases in the South China Sea.

The picture below shows Adm. Harry Harris, while he served as the commander of the U.S. Pacific Command (PACOM) under the Obama administration, testifying in front of the Senate Armed Services Committee, pointing to a satellite image that CSIS provided him. 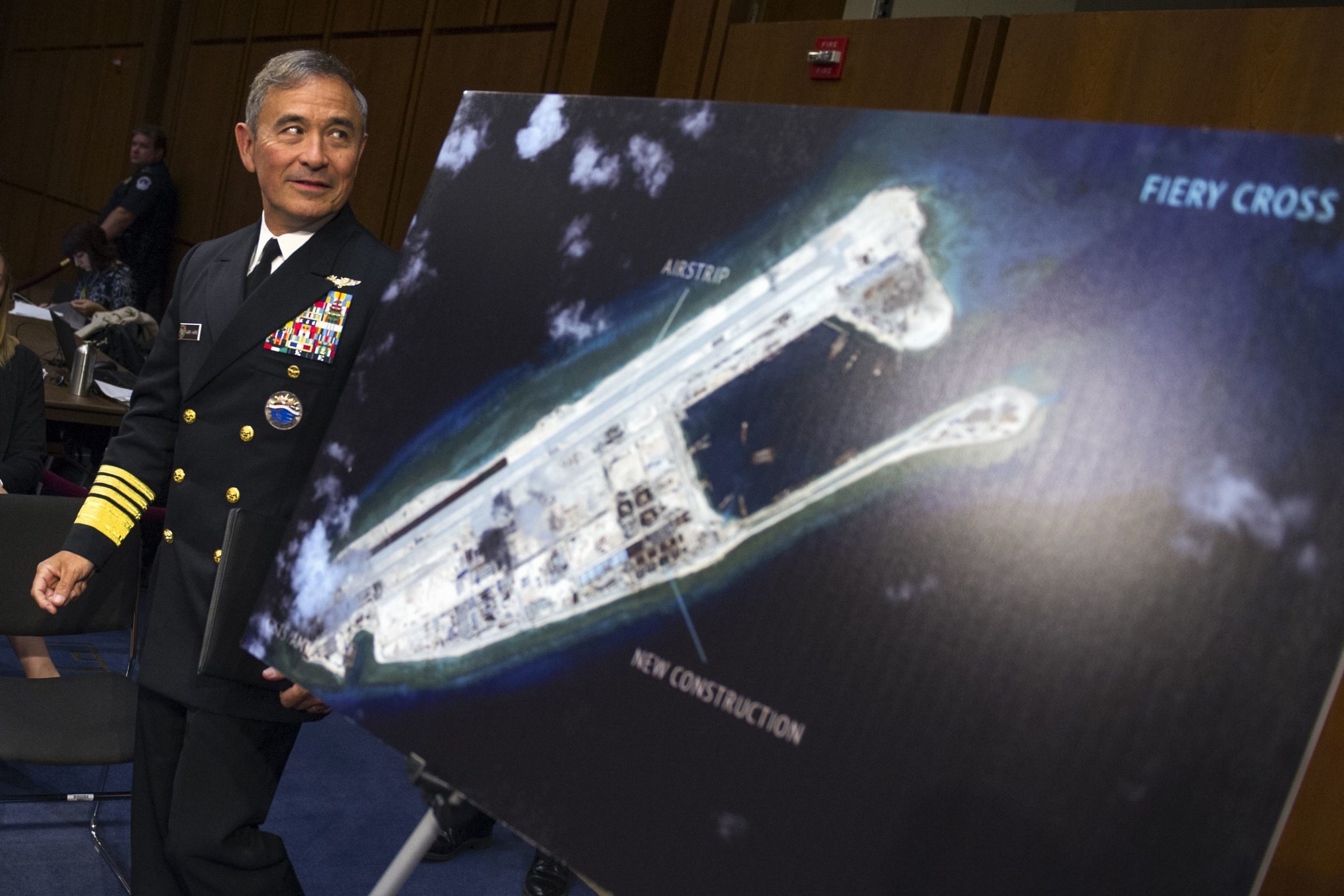 Adm. Harris knew about China taking dredgers out to the sea, destroying coral reefs, and building military outposts in order to assert authority over its maritime neighbors long before CSIS made the evidence public. Only, earlier, he could not have addressed the issue publicly, let alone testify in front of Congress, since US intelligence reports are typically classified.

“The difference with this project and so many others from CSIS was that we built an entire website around these issues at the Asia Maritime Transparency Initiative. We did not bury these striking satellite photos in a report that languished on a congressperson’s desk,” says Paul Franz, who manages the production of innovative and engaging visual content at CSIS.

To this day, AMTI is cited as a leading source on Asian maritime legal and political issues. 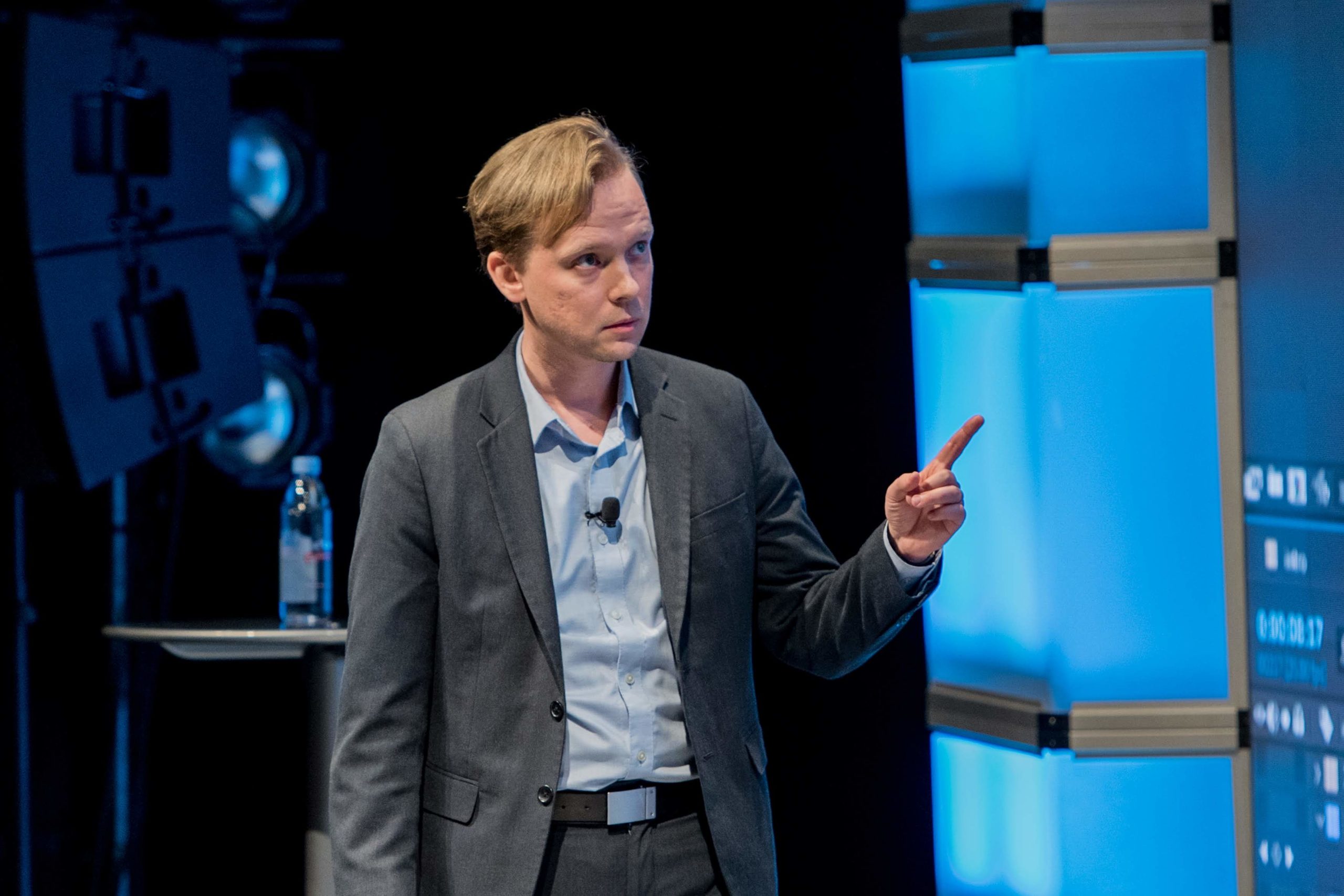 Paul Franz as he presents at a Mapbox conference

Up against a world stuck in PDFs

As a former journalist, Franz is deeply aware of how powerful visuals, when presented well, translate into headlines. But when he jumped over to the nonprofit sector, it shocked Franz to see the dismal ways through which think-tanks were communicating important issues to their audiences.

“The dominant output of the ideas industry and think-tanks is the PDF. The world has moved on from this and audiences demand engagement that is not only cross-channel, but also multi-platform. It is not enough to take satellite images or maps and shove them inside a product like a PDF. No one will ever see that,” Franz stresses.

And while he recognizes that there’s always going to be an expert audience for deep dives into the written word, Franz is also cognizant of the fact that not everyone engages with content the same way as a researcher would.

“What organizations fail to understand is that this is not a zero-sum game. If the report is accompanied by a compelling video or interactive product, it doesn’t come at the expense of the report or the research. It all exists in a continuum of engagement. The report isn’t a tombstone,” he quips.

This is why as Director of Technology and Dracopoulos Chair in Creativity and Innovation, Franz has ensured that telling stories with maps and imagery – geostorytelling – becomes a core part of CSIS’s brand.

“We deal with heady stuff every day – major geopolitical issues of our time that shape the present and future of our world. Yet, we’re not journalists, novelists, or storytellers in the traditional sense. Unlike journalism, we can’t always rest on finding a compelling character to generate empathy and interest,” Franz points out.

“So, maps become the next best thing. Maps are familiar. They are engaging and fun. Maps transcend national languages. They are part of a common visual vocabulary that people can easily understand.”

In 2019, CSIS started a new video explainer series called ‘High Resolution’, orienting stories around the geospatial aspects of CSIS’s research. Franz and his team have produced 14 episodes to date, and by far, the series has been one of the most successful and most-watched products at CSIS – averaging an 80 percent completion rate and over 1 million views.

“To go from unread PDFs to this level of attention is all we could have asked for,” Franz smiles.

Pushing the envelope for maps

The success of ‘High Resolution’ also gives a nod to the inclusivity of the geospatial industry, proving that maps aren’t a province of cartographers or GIS professionals alone. “It shows that a video and motion designer can also have a seat at the table and a voice in geo,” Franz asserts, pointing to the emergence of tools like Google Earth Studio and the potential they hold for motion design, maps, and visualization.

“We think of maps as these static things – either an interactive image shown through an iframe or a still image. There’s so much room to keep pushing the envelope and incorporating the best of cinema – motion design, sound design, etc. – to make maps even more compelling.”

Does that list include virtual reality tools as well?

Not at the moment, Franz shrugs.

“At a recent geography meetup, I tried out Maxar’s CityBox to explore the locations of satellites. Beyond its initial ‘wow’ factor, I did not see much value to using it, especially from a storyteller’s perspective,” he explains.

“The question VR app developers really need to ask themselves is: What is the value-add? What can be done with native VR tools and technology that a ‘normal’ desktop or mobile experience cannot provide?”

For storytellers like Franz, immersion is everything. “If I can be fooled, even for one second, that I am actually standing on a corner of Washington, D.C., with a headset on, then I think VR will have reached a turning point. Right now, I still feel like I’m caught inside primitive attempts at early 3D visualizations of the 90s, with jagged edges, blurry images, and poorly extrapolated heights. For that matter, the VR geo apps I’ve tried are very one-dimensional. They’re yet to capture another critical part of visual storytelling: audio.”

Can the industry create a VR app that would transform geospatial in the same way Half-Life: Alyx revolutionized gaming? “We are not there yet. But I hope to be a part of that conversation and help lead us there.”

Talk about the novel coronavirus and its impact on the geospatial industry, and Franz is quick to mention that, if anything, the COVID-19 pandemic has made remote imaging technologies more valuable than ever. “If fieldwork and on-the-ground photography is restricted in the future or deemed too dangerous, then satellite imagery becomes ever more critical,” he says.

“I think this is also a golden opportunity for us to build a bigger tent for geo. I’ve been to too many talks and lectures where it’s obvious that the presenter is talking to his or her five colleagues who know as much as they do about GIS. That’s not what we need to do. We need to talk about geo in a way that’s effortlessly understandable to all.”

And that’s exactly what Franz and CSIS plan to continue doing – through stories that combine the best of other disciplines and use ideas from other industries to make geo better.

The Neighborhood Impact of COVID-19, an Impetus for Innovative Testing Strategies

Many are making strong arguments in the appeal for more comprehensive coronavirus infection testing.  For instance, Paul Romer, former World Bank Chief Economist, contributes greatly to the debate with his modeling and provocative spending comparisons, to encourage testing everyone in the nation once every two weeks.  (His comparison with soda production is particularly provocative.)  However, with the possibility that a large national testing program will remain unattainable for the foreseeable future, we see a powerful role for geospatial data analytics in shedding light on the potential for innovative testing strategies that can have sizable net positive impacts (maximize blunting of transmission and spread against deployment of resources), can protect vulnerable populations, and can be seamlessly integrated into the flow and fabric of daily routine (minimize disruption).

Our own modest contribution in this area is motivated by the inherent difficulty in maintaining social distancing practices on mass transit and the potential for prolonged exposures as defined by the CDC.  Our study analyzes Bronx subway ridership composition based on home neighborhoods of riders, and asserts lower income neighborhoods may be significantly more vulnerable to economic disruption and health destabilization.

Over 80% of the U.S. population resides in urban environments and many urban residents have a significant reliance on mass transit.  Furthermore, mass transit and its unrestrained use is critical for the economic vitality of large urban environments.  We believe there is great merit in studying urban mobility patterns, including travel distances, dwell times, trip chains, route repetitions, anchor points, and activity spaces, and population dynamics like convergences, ephemeral clusters, and sustained pools in the context of the coronavirus, and perhaps supplemented with contact tracing data.  Some patterns of mobility and population dynamics are known, such as convergences at mass transit ingress and egress points, pooling on subway cars during high-occupancy commuter periods, and clustering at mass transit interchanges.  Mathematical frameworks for simulating movement, such as T. Alex Perkins et al in “Theory and data for simulating find-scale human movement in an urban environment,” or for analyzing virus spread patterns, such as Andrew J. Tatem et al in “Assessing spread risk of Wuhan novel coronavirus” could help us model coronavirus transmission and spread, and the impact to unique population groups.

At this writing the U.S. is just now reporting a consistent level of testing at or above 500,000 tests per day that some experts indicate is the bare minimum needed to track and contain (not diminish) the nation’s coronavirus outbreak.  Greater emphasis on modeling mobility patterns and population dynamics could lead to some truly innovative testing strategies, that maximize impact and curb negative consequences.