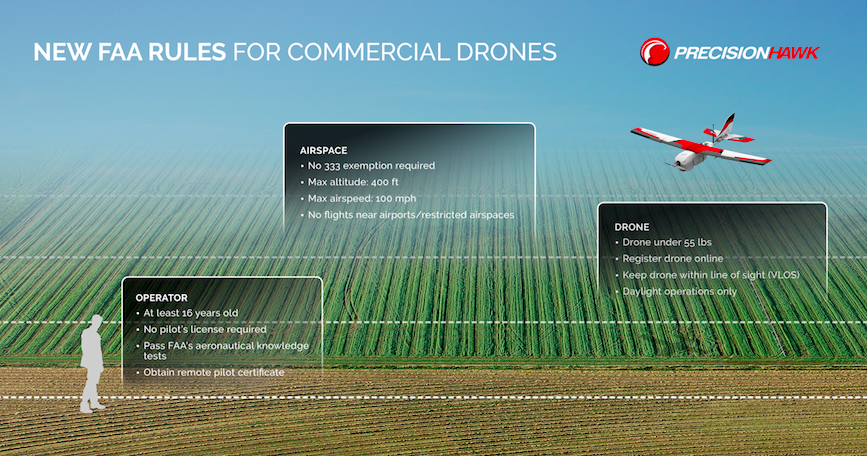 This morning, the Federal Aviation Administration (FAA) released the highly anticipated rules governing the operation of small UAS (sUAS) for commercial purposes.  The new rules are scheduled to take effect in late August – until that time, commercial operators may continue to operate under Section 333 exemptions.  As expected, Part 107 generally follows the proposed rules that were contained in the Notice of Proposed Rulemaking (NPRM) that was issued by the FAA in February 2015.

One of the most significant changes for industry is that commercial operations that fit within the framework of Part 107 will no longer require approval by exemption, which has typically taken months to secure.  Undoubtedly, the new framework will mean increased efficiency for commercial operators who will also not be required to secure airworthiness certification for their sUAS.

The fact that operators will no longer be required to hold a manned aircraft pilot’s license and can instead take a knowledge test to obtain a sUAS operator’s certificate is a significant win for the industry that will open up the skies to make more operators.  Brendan Schulman, VP of Policy and Legal at DJI remarks:

“This is a global precedent.  The most respected aviation authority in the world has concluded that drones may be operated safely for basic commercial operations without requiring airworthiness certification and without requiring pilots to pass a practical flight examination.  This reflects how fundamentally safe and beneficial this technology is, and is a model that should be adopted worldwide.”

The removal of the requirement to obtain a sport pilot’s license comes as no surprise as the NPRM stated that the “training, testing, proficiency and experience requirements for obtaining a commercial pilot’s license have limited relevance to the nature of small UAS operations.”  In addition to passing the aeronautical knowledge examination, pilots will be required to self-certify that they have the physical capacity required to safely operate sUAS.  They will also need to undergo a TSA security threat determination.

In anticipation of the skies opening up significantly for sUAS, last year President Obama issued a Presidential Memorandum directing the National Telecommunications and Information Administration (NTIA) to convene an industry-led multi-stakeholder process to address privacy, transparency and accountability issues raised by UAS.  In May – after many months of meetings – various industry stakeholders reached consensus on voluntary best practices for conducting UAS operations.  Jules Polonetsky, CEO of Future of Privacy Forum, one of the stakeholders involved in the NTIA process states that with the final rule in place:

“Drones will bring a wide range of benefits, but for widespread acceptance, it will be essential for the public to feel comfortable that personal data collected by drone operators will be used responsibly.  The drone privacy best practices provide guideposts that will help major companies and small operators alike demonstrate that they handle data in a trustworthy manner.”

In the coming months, with support of the White House, industry stakeholders will work towards developing educational initiatives surrounding the privacy best practices aimed at promoting broad industry adoption.

In addition to responding to privacy concerns surrounding drones, what the industry needs to achieve its full potential is a framework that supports beyond line of sight operations.  This sentiment was expressed by Kurt Carraway, Unmanned Aircraft Systems Executive Director at Kansas State University (KSU): who commented on the Pathfinder Program which is a vehicle established to research how to fly beyond line of sight safely: “the methodologies incorporated into this great work are exactly what is needed to strike the balance between the advancement of the UAS industry and expansion of integration into the national airspace in a safe manner.”

In the meantime, industry reactions to the final rule suggest a general excitement surrounding the future of UAS.  Bob Young, CEO of PrecisionHawk remarked that “today, the FAA revealed new regulations that maximize freedom andsafety, promoting business innovation that will take the industry to the next level. The rules recognize the value of drones as a tool to preserve our growing planet’s diminishing resources without jeopardizing a stellar safety record. We are excited to about the bright future of flying robots.”

Say thanks for this article (0)
Diana Marina Cooper
1 posts
Want to be an author?
The community is supported by

As the ongoing UEFA Euro 2016 football (aka soccer if you’re from the US) championship is keeping fans in Europe in front of TVs, Netbet released an interesting map that tracks the origins of all 552 players in the tournament and presents them as an interactive trademap.

24 nations are competing in France this summer, but in fact many more are represented through migration and ancestry. The map reveals that France has the longest list of athletes who were born abroad or have foreign ancestors (15 out of 23). Just below we find Switzerland with 14 out of 23. On the bottom of the list there is the team from Romania which is composed only of natives. Check it out:

Well… in football nationality can be a fluid concept but from the cartographic stand point the map does the job of presenting it really well.