CARTO Locations was one of the best Location Intelligence events ever 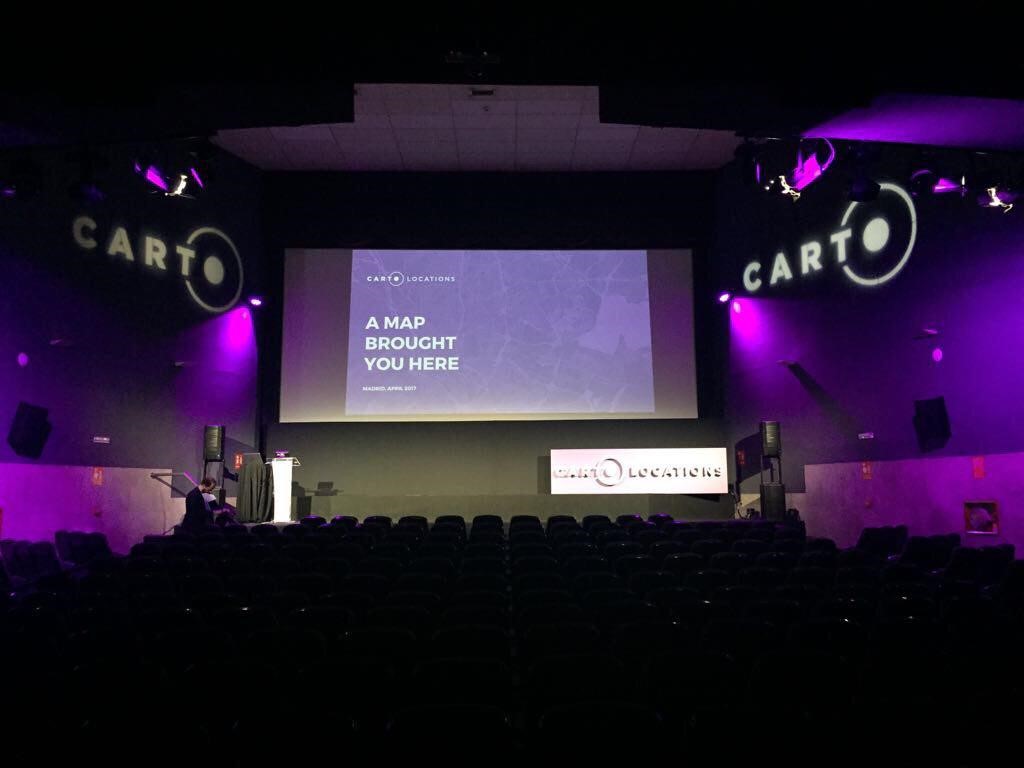 CARTO Locations is a new location intelligence event organized by CARTO, a provider of Location Intelligence software. The first edition of this event took place from April 26-27 at CARTO´s headquarters in the Palacio de la Prensa in Madrid, Spain. With over 300 visitors, some coming from as far as Japan, the event was well-visited. The two-day program offered several speakers and panel leaders from the fields of analytics, data visualization, geospatial analysis, and data science. CARTO staff was present to discuss different components and new releases of the CARTO platform in a series of keynotes and technical sessions, while CARTO partners discussed how CARTO’s platform and location data extends their business and services.

The following article provides a selection of keynotes and technical sessions of the event.

The event´s opening keynote was delivered by CARTO CEO Javier de la Torre, who discussed the term location intelligence, which is the process of deriving meaningful insight from geospatial data relationships to solve a particular problem. CARTO´s LI platform is now used by more than 1200 individual customers worldwide to derive and visualize these insights.

New data sources, analytics and audiences are driving a new location intelligence revolution. With “new analysis”, he referred to CARTO Builder, a web-based drag-and-drop analysis tool for business users and analysts to discover and predict key insights from location data. CARTO’s second big product offering is Engine, a one-stop shop of geospatial tools, services and APIs for the rapid development of location applications.  Companies such as Waze, Tile, Airbnb and Uber are all examples of companies that make use of location intelligence, by combining location data with analysis. An example of how CARTO’s technology is reaching new audiences is the Bloomberg Terminal, a software system for monitoring and analyzing real-time financial market data and place trades that now comes with integrated CARTO location intelligence technology.

A number of keynotes were given by CARTO partners that discussed the importance of location data and how it adds value to their products and services. The first one being from Telefonica’s Chief Data Officer Chema Alonso, who made a statement that was repeated many times during the event: companies that make decisions based on location-based data are ahead of companies that don´t. To support this statement, he first showed how consumers use location data for routing, finding a parking space or restaurant information on Google. Second, he showed how companies build user profiles based on where they are, when and how they behave. For the Mobile World Congress in 2017, Telefonica aggregated this data for studying commuter patterns studies around Madrid. In Malaga, Telefonica uses IoT infrastructure to make the city greener and smarter, while the local government uses CARTO technology to monitor information created by sensor technology around the city.

Elena Alfaro is Global Head of Data & Open Innovation at BBVA, a bank that is active in both Spain and Mexico. Her keynote provided an interesting view on how BBVA uses big, geolocated financial data from its customers to study and map their behavior: location technology makes it possible to see where in a city or area they make payments. She showed how CARTO’s platform was used to map these payments, as well as to analyze a network of shared customers moving throughout the city and redraw existing boundaries among areas (zip codes). On a larger scale, the same process was executed for large tourist areas in Spain during the summer months, showing where BBVA customers make payments when on holiday.

BBVA’s business customers also benefit from big, geolocated financial data through customized apps that provide insights to business owners as how to improve their business strategy based on information of the area where this business is located. Finally, she showcased BBVA API Market, an online API catalog targeted towards companies, small businesses and developers interested in building value-added services based on financial APIs.

For CARTO users wishing to use authorized location data instead of OpenStreetMap’s free data, HERE provides location data as a premium service. Leon van der Pas, who is Senior Vice President IoT Business Group at HERE, discussed how HERE is reinventing itself once again in a quickly changing geospatial market. In his keynote titled “A Perfect Storm: Data, Digitization and Disruption”, he explained how location data underpins HERE’s open location platform and how location data provides new insights and possibilities for all industries, not just automotive. He continued with an overview of new location intelligence technologies that require HERE’s location-based data in the future. He expects the drone market to professionalize more, as current technology is insufficient to realize its full potential. A concept that originated in the car industry, the so-called Reality Index that provides a real-time car navigation map, can also contribute to entire cities and its inhabitants and this is where technology providers, mapping companies and the automotive industry are working towards in the coming time. 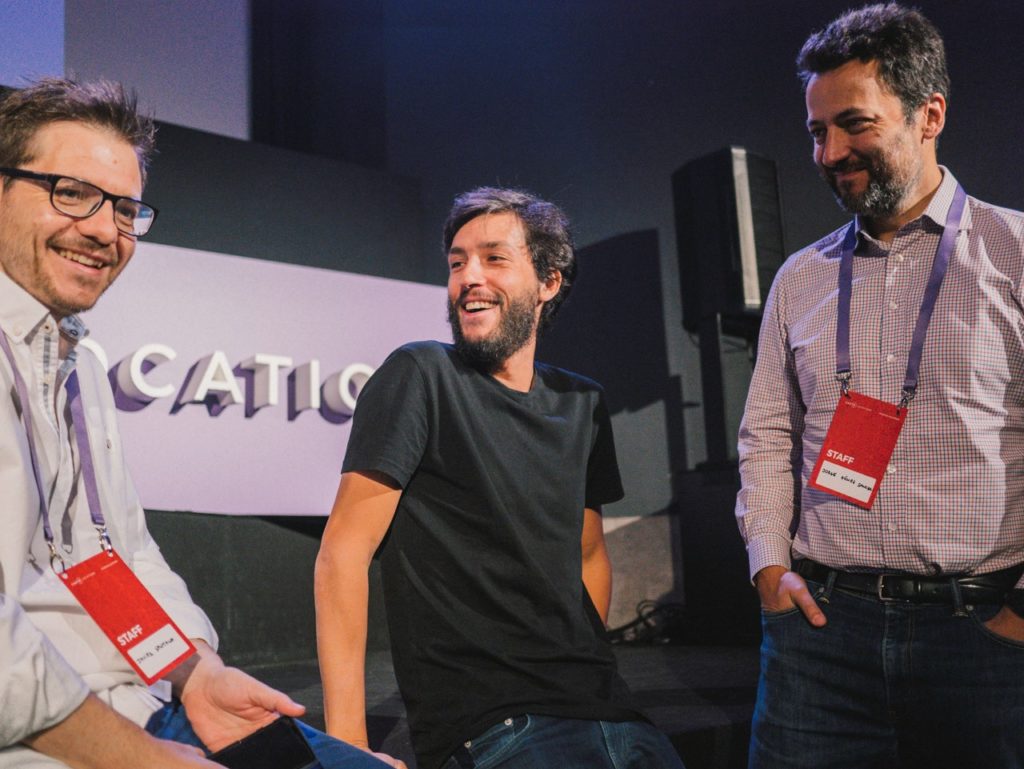 The first real technical session, “Connecting the Dots”, was delivered by Javi Santana, who is CARTO´s Chief Technology Officer. He showed how location data has changed over the years and that using location data today means handling large volumes of real-time data. One way CARTO can handle such data is through Torque.js, which renders big, time series data in the client. In addition to Torque.js, CARTO works with regular location data from databases such as Oracle, MySQL and PostgreSQL, Big Data platforms (Redshift, Hive). Nowadays, it’s common to use multiple data sources to produce one map: a 21st-century version of John Snow´s cholera maps of the 19th century would involve a combination of location data from public sources, telecommunications, social networks and demographic data. A recent customer story showed how spatial analysis can be used for understanding and predicting the Zika virus in Brazil.

A key product overview of the CARTO platform was provided by Javier Alvarez, who is UI developer at CARTO. This session provided insight to how CARTO Engine and Builder work together, as well as the future of both. While Builder has been created thanks to Engine APIs, Builder also helps to shape Engine by determining the difficulties in developing or expanding APIs, and provides feedback allowing the company to develop simple APIs for solving complex problems. To be released soon is an Analysis UI Framework to run complex geospatial analysis at scale.

Stuart Lyn, Head of Research and Data at CARTO, explained that spatial analysis is different than other types of analysis as data doesn´t stop at boundaries and relationships change from place to place. His presentation focused on geo algorithms and advanced Analytics. CARTO offers spatial analytics tools such as calculation of point clusters found in GIS software and data science software. There´s also a Python module for existing data science workflows called CARTOFrames. A use case that was mentioned many times during the event is the study of movements, and related applications such as optimization of infrastructure, inference (uncovering underlying patterns and relationships in location data) and prediction using spatial and temporal data patterns.

The second conference day opened with a presentation called “Location (without all the hype)” by Sergio Álvarez Leiva, who is CARTO’s Chief Product Officer. While most of his presentation was about early mapping examples, the last part discussed a number of upcoming CARTO product features. Of particular interest were advanced SQL analysis workflows, more and better collaboration tools, a smart vector rendering engine, a new version of Engine, more and better visual collaboration tools, a Pandas interface for integrating CARTO into data science workflows and 3rd-party data streams through the Data Observatory. 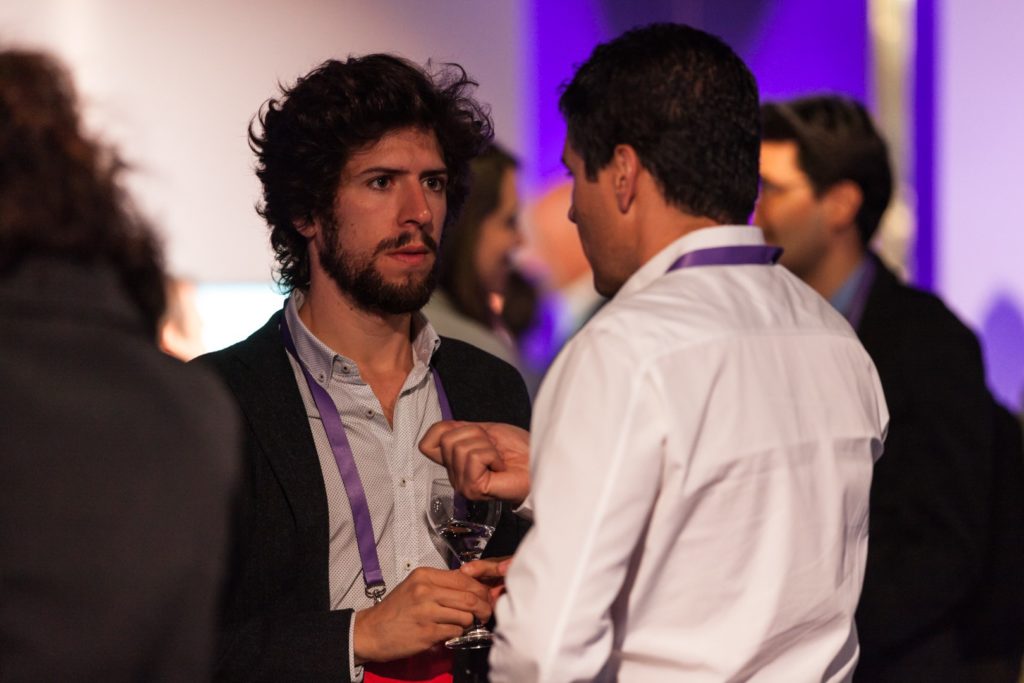 This Data Observatory was also the subject of the next presentation, delivered by Stuart Lynn and Javier Noguerol. This data observatory provides out-of-the-box location data for more than twelve countries, as well as access to a catalog of analyzed data methods, and the opportunity to build LI apps on top of fast APIs. This means that available data from the web that might not be easily searchable can also be found through the data observatory through well-formed and named tables and searchable through a list of data provided by CARTO. The data observatory is also a context-providing API that powers spatial analysis.

The past and future of CARTO’s Mobile SDK was discussed by Jaak Laaneste, who is Head of Mobile at CARTO. Since 2009, CARTO used Nutiteq´s mobile maps SDK, offering offline maps, mobile GIS and 3D globes and cities. It was possible to use your own server and GIS backend with the SDK, but some customers wanted a full solution. In 2016, CARTO acquired Nutiteq and released the 4.0.0 version of its own mobile SDK in December of that same year. This SDK offers offline features, is not locked to a specific base map source, has been integrated with the CARTO platform and offers GIS features such editing vector data. An impressive integration roadmap mentions two new updates later this year of the mobile SDK, integration with CARTO´s current and upcoming APIs, such as the new Engine APIs.

The remainder of the program offered presentations on location intelligence and satellite imagery analytics, CARTO´s partner program, Google Cloud and maps, among others. The event concluded with a discussion on the future of CARTO and Location Intelligence, including a Q&A session with CEO Javier de la Torre, Sergio Álvarez Leiva, Javi Santana and Ian Walsh.

Say thanks for this article (0)
Eric van Rees
10 posts
Want to be an author?
The community is supported by:

The 2017 edition of The Submarine Cable Map by TeleGeography is out and it looks great! 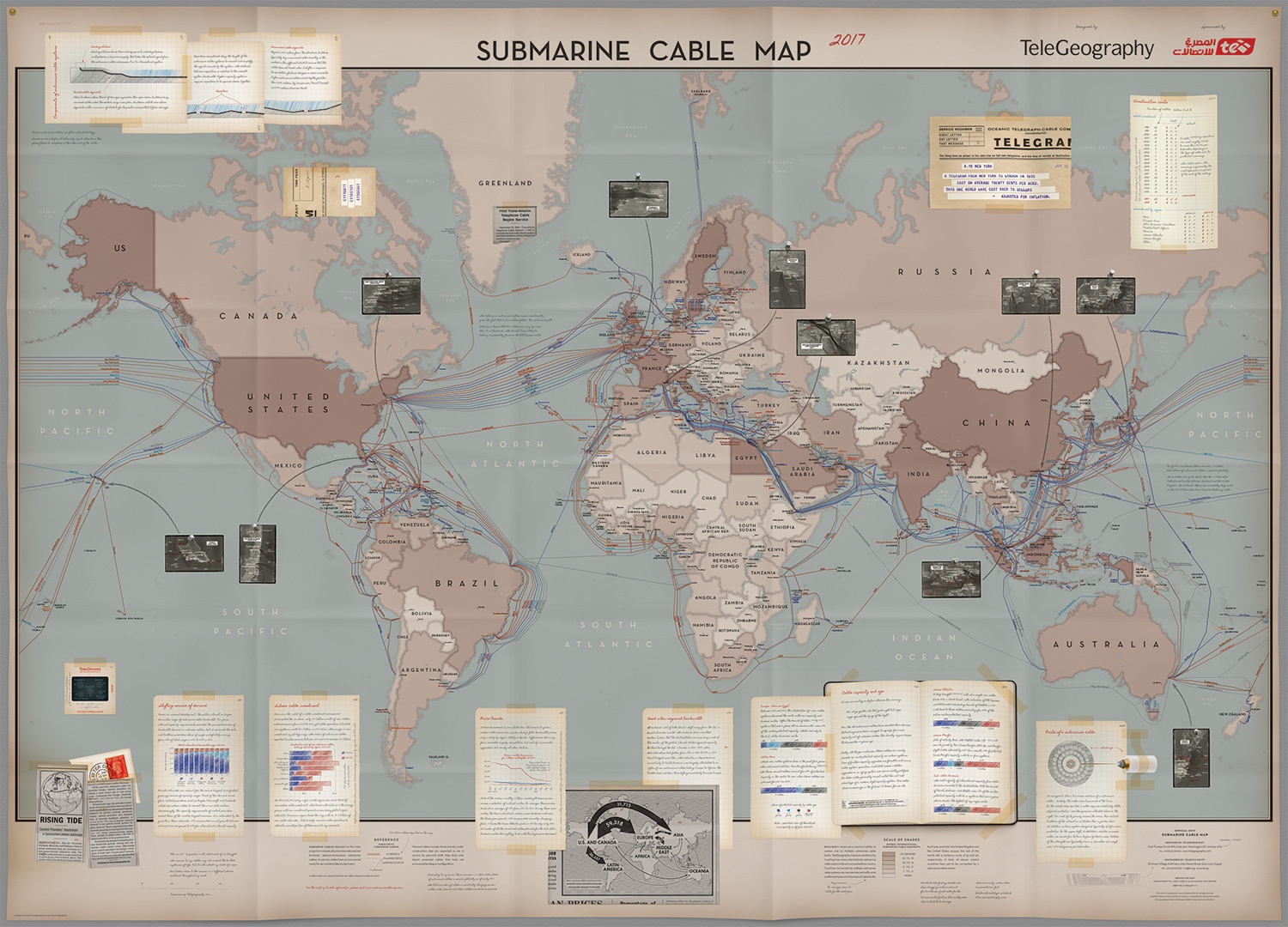 Every year TeleGeography, a telecom data research firm, releases a stunning map related to global communications. Each and every of them is a piece of art. The 2015 edition was styled like old maps from the Age of Discovery. Last year it had a modern design and looked like an infographic.

The 2017 edition has a new theme. The map is designed in the Indiana Jones style with a collection of artifacts, journal entries, and hand-drawn sketches and it looks great! What I love about TeleGeography mapping projects is that the top-notch design is not the purpose on its own. The aim on the map is to visualize information, not the other way around, and these guys really get it!

2017 Submarine Cable Map shows a lot of interesting data. It visualizes 293 active and planned submarine telecommunication cables that are connecting the world under the ocean, changes to submarine cable capacity on major global routes in the last 20 years, aerial “photos” of major submarine cable landing stations as well as countries with the largest number of submarine cable connections, giving them higher resiliency.

The map is really stunning and it is great to know that there are still serious organizations that believe that making maps is an art. Thanks for that TeleGeography!