Apple is on a hiring spree. The company is looking for people who are skilled in the areas of mapping, geospatial information services, navigation and fleet management. Over 70 job listings pertaining to these specializations have been posted by Apple in the last month alone. And as CNBC notes, that’s a lot of jobs revolving around just one discipline. So, we can safely assume the technology giant has something big up its sleeve.

We are already aware that Apple has roped in some very, very smart people from Google’s satellite business, NASA and Tesla to its talent pool earlier this year. And that it’s painstakingly trying to improve its Maps product is also no secret. More recently, the Apple Mapping Van has been spotted driving around with four LiDAR sensors, capturing a 360-degree view of its surroundings. Who knows, we might even see 3D street view in Apple Maps in the times to come!

Meanwhile, on the Q3 earnings call earlier this month, Apple CEO Tim Cook was quite bullish about the company’s future in the field of augmented reality and autonomous systems – both of which require serious expertise in the field of location and positioning technologies.

Detailing that Apple’s ARKit, a new set of tools for developers to create augmented reality apps, has captured the imagination of the developer community, Cook said, “We believe AR has broad mainstream applicability across education, entertainment, interactive gaming, enterprise, and categories we probably haven’t even thought of. With hundreds of millions of people actively using iPhone and iPad today, iOS will become the world’s biggest augmented reality platform as soon as iOS 11 ships.”

When quizzed about Apple’s focus on self-driving technology, Cook didn’t comment on the company’s interest in autonomous vehicles, but did acknowledge that it is “very focused on autonomous systems from a core technology point of view.”

Cook admitted that a “large project” is going on in this field and that the company has been pouring in big investments to make it a success. “From our point of view, autonomy is the mother of all AI projects. And the autonomous systems can be used in a variety of ways and a vehicle is only one,” Cook said.

A Vision for Google Earth

Geoawesomeness recently published a blog outlining a major new development for Google Earth for Chrome i.e. Google Earth as a social networking platform. I’m worried. I love Google Earth, and I love its new home in the Chrome browser. But I think there’s a whole lot more it could do as an educational tool for mapping before it shifts focus. 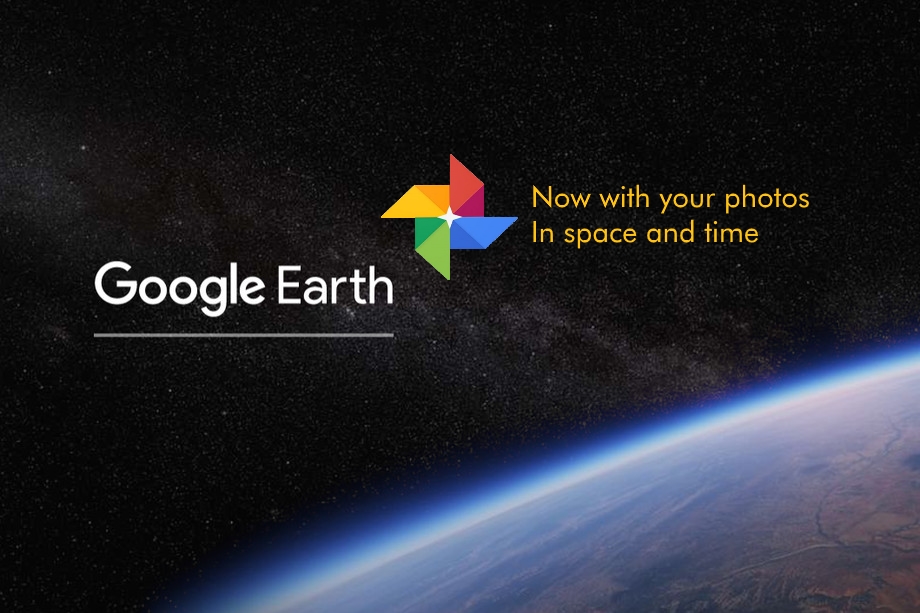 I’m a geologist working in the education sector, as an editor of geographical teaching materials, and I’m passionate about sharing geographical knowledge and making geography exciting and accessible. Google has a platform to really push the boundaries in this regard; not just with geography but across all disciplines.

As geographers and cartographers we always looking for new ways to take mapping into the future, but as a geologist, I’m really interested in exploring new technologies that can be used to map the past.

The theory of plate tectonics is now widely accepted, and scientists have used a number of techniques to map the locations of tectonic plates throughout geological time. This is the field of paleogeography. We now have a very good idea of the movements of plates throughout the timeline of known life on Earth, The Phanerozoic Eon.

Google Earth’s for desktop has a history slider which lets us see recent changes on the surface of our planet but why not slide all the way back through geological time (Google Earth layer file) and watch the continents as they shift and collide; watch the opening and closing of seas and oceans, and the forming of mountain belts. Global biomes of the past could be mapped out using Google’s iconic satellite imagery, providing a representation of rainforests, deserts, tundra, swamps… 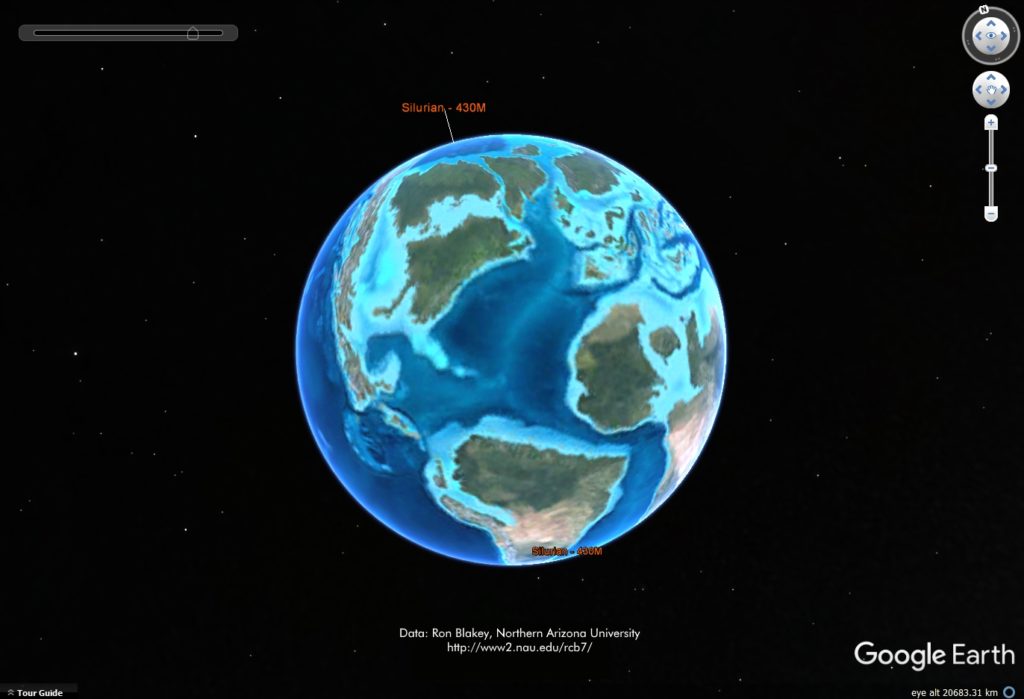 Geological history of Earth in Google Earth for desktop. Here we see the Silurian Period, some 430 million years ago. This was a time when high sea levels meant much of what is now North American was flooded by shallow seas, modern-day South America was separated from North America, and Africa was only recently separated from South America and was moving towards Europe and Asia. Credit: Ron Blakey, https://www2.nau.edu/rcb7 (file: EarthSilurian.jpg)

When you can ‘see’ global changes like this play out before you, and develop an understanding of the amount of change this planet has experienced, global issues like climate change are perhaps less difficult to refute. In educational terms, we shouldn’t be asking if people ‘believe’ in climate change. We should accept global climatic changes, and work towards a future where we can limit the negative impact on humankind that results from a warming planet. Google are in a position to share this type of knowledge to a far wider audience using Google Earth; educating the world, and influencing our futures.

Looking back in time is one thing, but why not look forward to the future. With Google investing heavily in SpaceX, it’s not too hard to imagine a time when space travel is not just for the mega-rich. Google Earth for desktop already allows virtual exploration of the Moon and Mars as well as SkyMap. Ever higher resolution images of the planets in our Solar System are being collected at an ever increasing rate, so why not map all of the planets, moons and the Sun, and geo-locate them all in Google Space for Chrome; scrolling out from the Earth to see the whole solar system – an orrery – complete with the ability to ‘turn on time’ and watch the planets in orbit… As an educational tool, so widely available and so accessible, this would be incredible. Google Earth Director Rebecca Moore’s “gift to the world” could be a gift to the universe!

A move towards social networking within Google Earth, albeit not-for-profit, could pave the way for reduced support and development of these types of core, educational mapping functions.

Having said all that, I do think there is one key area within the suite of Google apps that is not exploited nearly enough, and it would make a great basis on which to develop a social platform.

Close to 50% of the world’s population now own a smartphone. Most of these have a camera and GPS and that tech is set to get even more accurate. We’re a snap-happy species, with conservative estimates suggesting more than a trillion images will be taken in 2017 alone. A huge number of these images will be tagged with geo-location data in space and time.

Google Photos provides a service allowing huge amounts of data to be stored and accessed in a user-friendly and intuitive manner, with automatic upload from phone to server. As an individual, my photos tell a story; they act as a timeline of my life, showing the people I meet, the places I visit, the events I attend.

I want to lay all my photos out in a timeline, and then group them intuitively. Marking the start and end points of a holiday, a concert, a family wedding, a birthday party, a particular meal, a work social, a given year, or decade. You get the picture.

But I might also want to lay them out in spatial groupings. All the pictures taken at my house, school, workplace, town, or in a chosen country. And with facial recognition why not group all photos of my child, my best friend, my family, everyone within one of my Google circles?

Google can do a lot of this for me and make suggestions for new albums, which I can then edit and confirm. And Google can keep these updated when new photos meet the right criteria. A single photo might appear in multiple albums (event, particular country, family circle, given year). 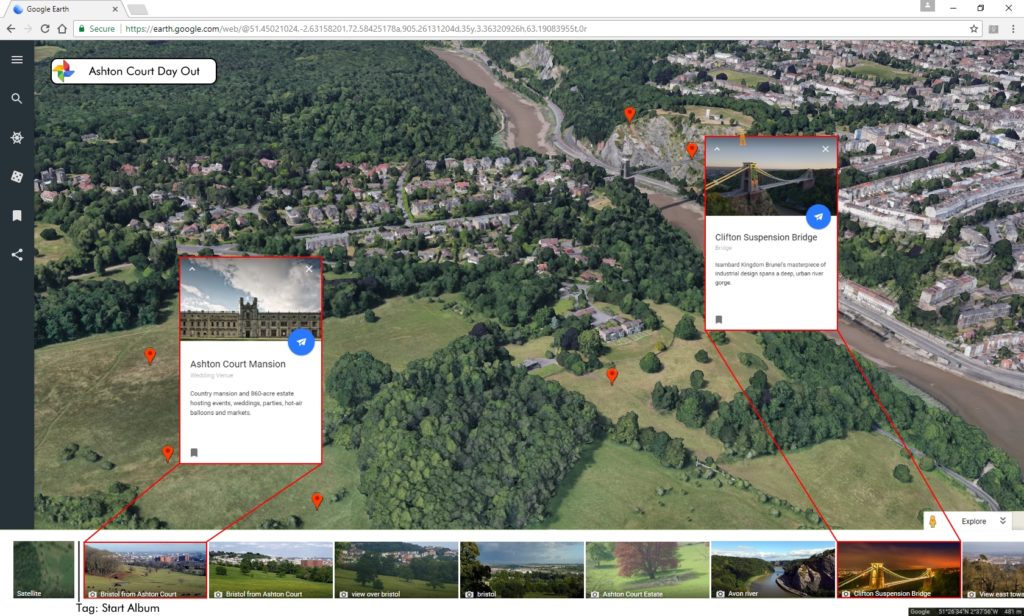 In each case, I may then want to see those photos on a map. A photo map tells a story of the journey you took on a day out, that special holiday, your gap-year travels, a work conference, an epic cycle ride… It can show the places you visit most frequently, and in the gaps, those places you’ve never explored. And these are stories you may just want to share!

Therein lies the power of Google Earth as a social network; a seamless link to our world and our lives through our shared photos.

They say “if at first, you don’t succeed”… For all their tries at creating a successful social network, I kinda hope Google succeeds with this one. But please Google, don’t forget the educational power of Google Earth, primarily as a mapping tool. Let’s keep Google Earth Geoawesome!