Apple has updated its Find My Friends app with what it calls a ‘new UI’ for setting up location-based alerts. The app uses geofencing to set up alerts for when you, or a friend, arrive or depart a location, and the new interface allows those to be more accurately defined. There is no big revolution… the app will simply let you define the distance from a location for receiving notifications. The redesigned app also simplifies the notification process to fit on one page, with options to receive alerts when your friends arrive at or leave a specific place, along with settings for notifying others based on your location. 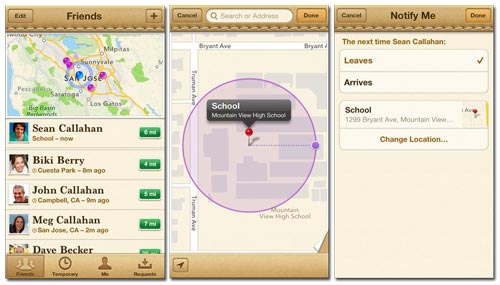 Real Estate in Outer Space is in a lot of demand and considering that Space debris is only making things chaotic for the men behind the space missions and control stations, its only naturally that a great deal of research went into trying to ease the pressure on Galactic Real Estate.

Several international debris mitigation guidelines and policies have failed to mitigate the problem of space debris. The ill effects of space debris can be understood as a matter of fact from the event that happened in 2009; out-of-service Russian satellite Cosmos 2251 collided with the functional Iridium 33 satellite. Both satellites were destroyed and fell in over 2,000 potentially lethal pieces to Earth. Satellite debris is increasingly making the life of Space Scientist horrible. Now not only do they have to pray for the perfect launch, they might have to also include “No Collision with debris” in their annual “wish” list!

A report from EurekAlert indicates that Global Aerospace Corporation (GAC) had announced that the American Institute of Aeronautics and Astronautics (AIAA) is publishing an article entitled “Removing Orbital Debris With Less Risk” in the March/April edition of the Journal of Spacecraft and Rockets (JSR) authored by Kerry Nock and Dr. Kim Aaron, of GAC, and Dr. Darren McKnight, of Integrity Applications Incorporated, Chantilly, VA.

One proposed method utilizes electromagnetic tethers that draw down satellite debris; the EM Tethers use a power supply to create a flow of electrons within and interacts with Earth’s magnetic field to draw the satellite slowly down to Earth. Unfortunately the EM tethers work slowly and have a large cross-section which increases the risk of interrupting other satellites in the environment near the defunct one. The next option is a mechanical contraption a.k.a inflatable attachment that increases the drag on the satellite and slows its orbit, effectively making it spiral towards earth.

The authors of the paper also propose ultrathin envelope spheres. The spheres don’t require a lot of power unlike an EM tether, but it would take only a matter of months to draw the satellite down to Earth. The spheres also work quickly, greatly reducing the risk of collisions despite the temporary added girth.

So whats the verdict? The graph says it all!

This graph displays the area-time product summary comparison of the several deorbit devices evaluated for their risk. High-energy collisions can create significant amounts of new and dangerous orbit debris and low-energy collisions, while not generating significant new debris, can disable operating satellites. Area-time product, measured in square meters per year, is the product of collision cross-section area multiplied by the time for the object to reentry the atmosphere.