How do my users move in this city? Where do they go? What does the “flow” of this city look like? How does that change throughout the day?

What is movement analysis?

Until now, we have talked about performing geospatial analytics in primarily two ways:
Static Points: Analysing metrics or events with respect to a static entity that doesn’t move. For example, analyzing how many trips start from a station or what is the average prep time at this restaurant. To read more, check this out!
Aggregations: Using a system of geospatial aggregations such as hexbin or geohash when we are dealing with an event that has happened at a certain place and time. For example, aggregating orders delivered onto hexagonal grids for one city. To read more, check this out.

However, in order to understand the metrics between two events over a trip, movement analysis is very useful. Movement analysis is primarily done on ping data that is either received from vehicle sensors or from driver apps and helps you in understanding how your users and assets move on the ground.

Characteristics of movement (or trips) 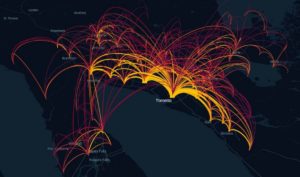 Trips in a city

While analyzing trips, here are the characteristics that we should be looking at:

Say thanks for this article (0)
Aditi Sinha
1 posts
Want to be an author?
The community is supported by:

Blockchain has been one of the hottest topics in tech for some time, and like numerous other sectors, the automotive and mobility industry is also exploring potential applications for blockchains. A new patent application published by the US Patent and Trademark Office this month reveals General Motors’ (GM) plans to use blockchain to develop a decentralized, distributed navigation map for vehicles.

The method will leverage one or more sensors embedded in automobiles to evaluate and characterize the surrounding area, including capturing the GPS information and registering the differences noticed on a blockchain map network.

To give you a rough example, if a sensor detects a road change (change in the lanes along a road, a traffic sign, speed limit changes, etc.), it would communicate the same to a perception and localization processor. The processor, in turn, will communicate that information with a blockchain map to detect any discrepancy with regard to the already registered transactions (or map data). Once enough vehicles/sensors relay the same new information to the network, the transaction will be accepted as a valid change and the blockchain map will automatically update to reflect the same.

Vehicles today utilize some type of navigation system that provides detailed maps to either a human driver or to the automated driving system of a self-driving car regarding the geographic location of the vehicle and directions to the desired destination. However, as GM points out, the current mapping systems are difficult to keep dynamic without incurring large costs. As such, there is a need for a new and improved system and method for distributing navigation maps to automobiles.

In essence, GM recognizes that the many benefits of using blockchain technology to develop a decentralized, distributed navigation map for vehicles. These include: