911 will soon take location data from your iPhone during emergencies 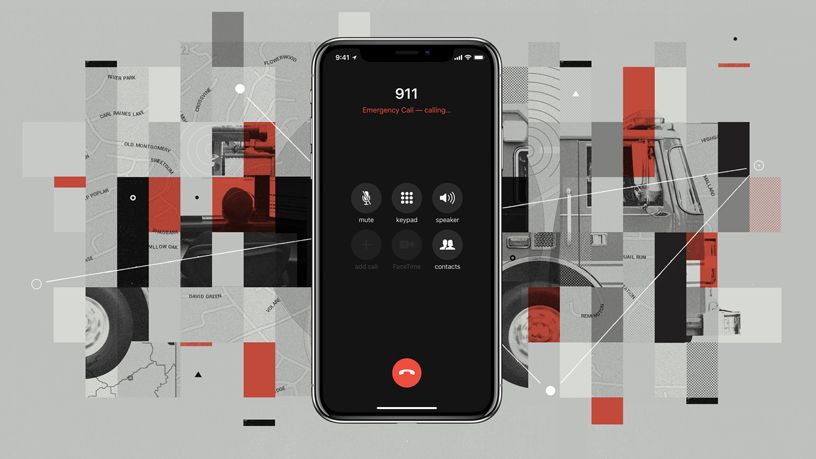 In emergencies, knowing the location of the person in distress is the single most important factor for first responders. Apple knows that all too well and is making it easier for 911 to dispatch a fire truck, ambulance, or police car where they are needed the most.
Since 2015, Apple has had the tools in place to determine the location of an iOS device using signals from the nearest cell towers and on-device data sources like GPS and Wi-Fi access points. What it didn’t know was how to get the data generated by its HELO (Hybridized Emergency Location) technology to 911 centers.

That is going to change with iOS 12, the next software update for iPhone which is slated to release later this year. Apple has partnered with emergency technology company RapidSOS to use the latter’s Internet Protocol-based data pipeline system to relay the emergency location data to 911 centers.

Five decades ago, when emergency services number 911 was set up in the United States, it was designed for the landline infrastructure of that time. The system would tell the operator the exact address where the hard-wired phone was installed and help could be dispatched swiftly.

Today, of the 240 million calls made to 911 each year, 80% are reportedly made from mobile devices. And pinpointing their exact location is no mean feat. Therefore, one of the very first questions an operator asks the caller is, “Where are you calling from?”
The Federal Communications Commission of the United States has mandated that by 2021, telecom carriers must be able to locate callers to within 50 meters at least 80% of the time. And Rob McMullen, President of the National Emergency Number Association, the 911 Association is positive that Apple’s technology will “accelerate the deployment of Next Generation 911 for everyone, saving lives and protecting property.”

Meanwhile, Apple CEO Tim Cook has assured that checks are in place to see a user’s location is not leveraged for any non-emergency purpose. Only the responding 911 center will have access to the location data during an emergency call.

#Business #Ideas
EUSPA Space Academy – where entrepreneurship meets space technologies
Geoawesomeness Team 09.15.2022
AWESOME 2
#Business
We have analyzed 568 geospatial startups around the world. Here are the conclusions about the market
Hassan Safieddine 05.21.2022
AWESOME 11
#Business
What is the metaverse and why should geospatial enthusiasts care about it?
Sowmya Somanchi 06.29.2022
AWESOME 5

So, this is a map you don’t expect to see every day. Riddled with tiny rat icons, what you see above is a catalogue of Parisians reporting rat sightings in the 17th Arrondissement of the French capital.

The brainchild of Geoffroy Boulard, the head of the municipal council of the 17th Arrondissement, ‘Report a Rat’ map came up after a daycare center’s playground in Paris was found to be infested with rats.

In an interview with a local television network, Boulard explained, “The presence of rats in public space is worrying and has become more and more serious. We had a crèche surrounded with rats dead and alive. Nobody is taking their responsibility. It’s a matter of public health. The city has to react to this sanitary problem. It’s not just the 17th [arrondissement].”

Boulard is not kidding. For every human being in Paris, there are 1.75 rats roaming the streets. The New York Times has declared the situation the ‘worst rat crisis in decades’. And the last couple of years have seen everything from overworked rat catchers going on strike to garbage collectors releasing a nauseating video of a swarm of rats trying to escape from a dustbin.

With ‘Report a Rat’ map, Boulard is hoping to catch the attention of Anne Hidalgo, the mayor of Paris, and let her know that her $1.7 million campaign to eradicate rats is not working out too well for the 17th Arrondissement. 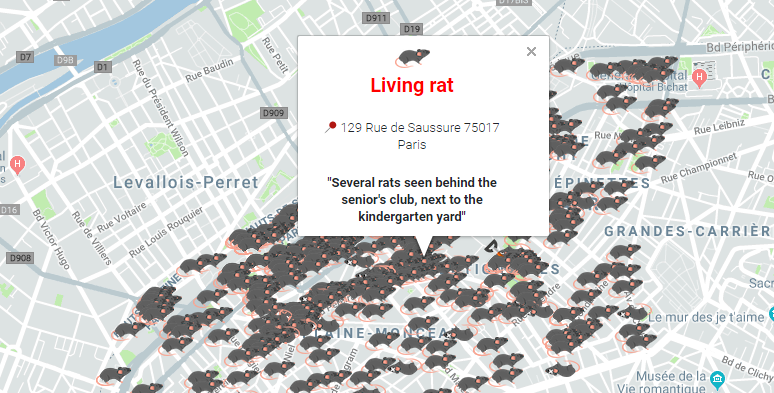 The interactive ‘Report a Rat’ interface allows citizens to record their rat sightings at a precise location, down to the lat-long level, and neatly label the annoying vermin as dead or alive. People can also leave additional comments, like the one you can see above, to help out the sanitation workers responding to the incident. For those who cannot access the Internet, a rat reporting hotline has been set up. Once the pesky rodent in question has been taken care of, its symbol on the map will reportedly get replaced by a shovel.